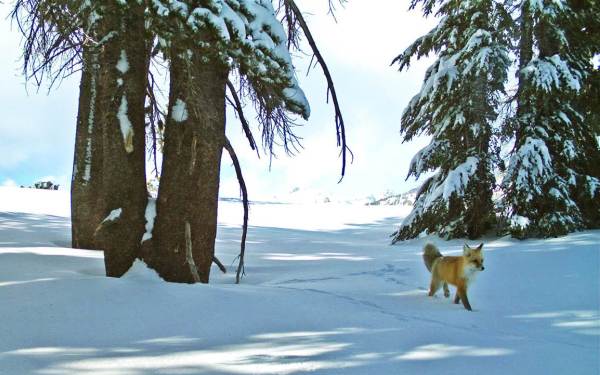 The elusive Sierra Nevada red fox was recently spotted in Yosemite National Park for the first time in nearly 100 years.

The sighting of the red fox—one of 14 mammals protected by California—was captured by motion-sensitive cameras on Dec. 13 and Jan. 4. Park officials are still trying to determine whether the cameras caught the same fox or a second one.

“The chance of running into them is very unusual,” park spokeswoman Kari Cobb said.

The last time a red fox was seen at Yosemite was in 1915, she said.

The shy creatures avoid human interactions. They burrow in soil and logs at 6,000 feet elevation, according to the park’s website.

Little is known about the creature because sightings are so rare.

Photographs of the Sierra Nevada red fox were taken in 1990 during a wolverine study at the Lassen National Forest. Cameras erected in the forest captured the mammal with its dark-colored fur on video footage.

Determined to photograph the creature again, park wildlife biologists placed cameras in Tioga Pass, where the fox was seen years earlier. Then in August 2010, a Sierra Nevada red fox was finally photographed near Sonora Pass, north of Yosemite.

The small creature was filmed biting on a bait bag containing chicken scraps.

University of California, Davis researchers analyzed saliva samples from the bag and confirmed its DNA was that of a Sierra Nevada red fox.

Two years ago, Cobb said, she and her husband spotted one of the foxes during a deer hunting trip near Sonora Pass.

“They are extremely cute little animals,” she said. “When you see them, they are pretty majestic.”

Researchers will continue using remote cameras to look for the Sierra Nevada red fox. Hair snare stations have also been set up at camera locations. Researchers hope to obtain hair samples for genetic analysis, so they can learn more about the red fox and determine whether it is connected to the Sonora Pass sighting.

The latest sighting, Cobb said, is a good sign.

Yosemite’s vast landscapes are providing a protected habitat that allow the Sierra Nevada red fox to possibly “make a comeback,” she said.