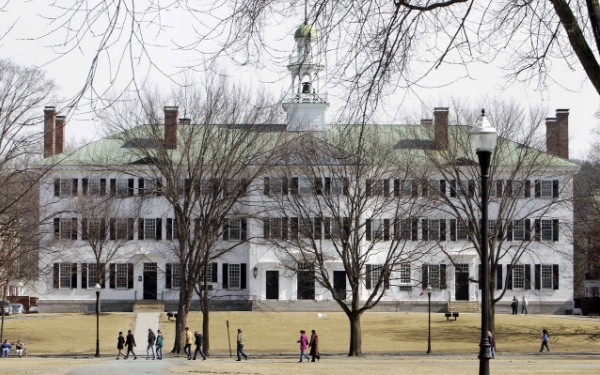 Dartmouth College is banning hard alcohol on campus and threatening to disband organizations that don’t shape up as part of efforts to “root out extreme behavior,” the school’s president announced Thursday amid controversies enveloping universities across the nation.

“Colleges and universities across the country face the issues I’ve detailed today,” Hanlon said. “We are not alone in facing them. But we will take the lead in saying, ‘No more.’”

The Ivy League school is one of 95 that is under federal investigation in connection with its handling of sexual harassment and violence. Last year, Dartmouth adopted a zero-tolerance sexual-assault disciplinary policy, with mandatory expulsion in the worst cases.

Under the new plan, undergraduate students won’t be allowed to have or consume hard alcohol, which it defines as alcohol that is 30 proof or higher, in residential areas or on other college property, and hard alcohol won’t be served at college-recognized events, Hanlon said. Penalties for those who have or purchase hard alcohol will “ramp up,” he said.

Hanlon also addressed the college’s Greek community, saying many had suggested over the last few months that the college eliminate fraternities and sororities.

“Ultimately, I do not believe that simply eliminating this one aspect of campus life would be a comprehensive, or even effective solution to the more pervasive challenges we face,” Hanlon said. “It would not address the charge I placed before our community of purging extreme behaviors where they occur on campus.”

However, he said, Greek and other organizations will face a higher level of accountability than in the past, with the college creating an annual review process to confirm that expectations for student organizations are being met.

“Everything is possible for Dartmouth. But our aspirations will never be realized if we fail to address a vital component: the environment in which our students live and learn,” said Hanlon, who has led the Hanover, N.H., school since mid-2013.

The U.S. Department of Education is investigating a total of 98 sexual violence cases at 95 colleges and universities, and the issue of sexual assault on campuses has been receiving increased national attention.

On Tuesday, two former Vanderbilt University football players were found guilty for their roles in a dorm room gang rape of an unconscious female student in 2013.

In November, the University of Virginia suspended all of its fraternities and sororities after fallout over a Rolling Stone article in which a woman, identified only as “Jackie,” said she was gang raped at a fraternity party.

Although the story was later discredited by Washington Post reporting and the magazine admitted there were discrepancies in the woman’s account, the story roiled the campus. Greek activity was shut down for the fall semester and through winter break, and this month, fraternities and sororities had to agree to a slew of stipulations before their activities could resume.

Vanderbilt and the University of Virginia are both on the list of schools under federal investigation in connection with the handling of sexual harassment and violence.