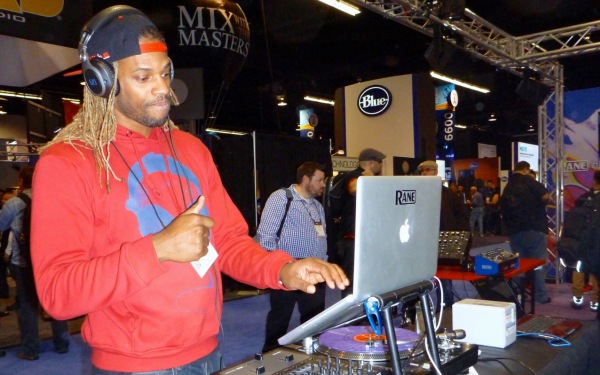 Where do musicians, music shop owners, music educators, instrument vendors, and basically any music professional and industry VIP converge to geek out on music? Where else but the annual National Association of Music Merchants (NAMM) Show! For anyone in the industry, this was the place to be, where retailers and vendors connect to help build and grow the nearly $17 billion music products industry.

A multitude of innovative products were featured at this year’s show which included Shure’s Premier Wireless products and Singular Sound’s BeatBuddy. The BeatBuddy won NAMM’s Best in Show award, wowing both retailers and customers. This tiny, foot-operated gadget mimicked a variety of drum beats as well as cymbal crashes, hand claps, and more. Shure made technological advances fun by showing off their line of cool and colorful wireless microphones, receivers, and transmitters.

Beyond displaying the latest products, NAMM is famous for their star-studded parties. Incredible performances graced the stages, venues, restaurants and hotel rooms within and around the Anaheim Convention Center. George Clinton & Parliament Funkadelic performed their funkified freshness, while fabulous female artists performed at the “She Rocks Awards,” featuring the soulful Colbie Caillat, guitarist extraordinaire Orianthi, and 80s girl band, The Bangles.

Education was also big on NAMM’s bucket list where business ideas were shared by leaders in both the music and corporate worlds. Apple co-founder Steve Wozniak was the 8:00 a.m. breakfast speaker on Saturday, providing the only good reason not to party too hard on the previous Friday night. Chad Smith, drummer for the Red Hot Chili Peppers, spoke on the success and importance of Arts Education in schools, and Stewart Copeland, drummer for The Police, was the opening speaker at NAMM’s “H.O.T. Zone” where many of the sessions took place.

The NAMM show was easily a visual and auditory overload for the everyday music fan, yet a big slice of heaven for the music lover. There were sections for every musical instrument and musical interest imaginable. Seen at the show were drummers slapping sticks at DW Drum, bass players carefully inspecting wood grain at MTD Guitars, and wide-eyed DJs checking out the latest turntables at the Rane DJ booth.

To put it simply, everything music could be found at the NAMM Trade Show. Even the iconic Stevie Wonder was found walking through the booths testing out the harmonicas and keyboards, right next to Dave Mustaine of Megadeth who was talking about his new signature Dean guitars. Awesome, right? Just another great year of celebrating music and geeking out at NAMM.