Disowned, under threat, Iraqi musician seeks new life in US 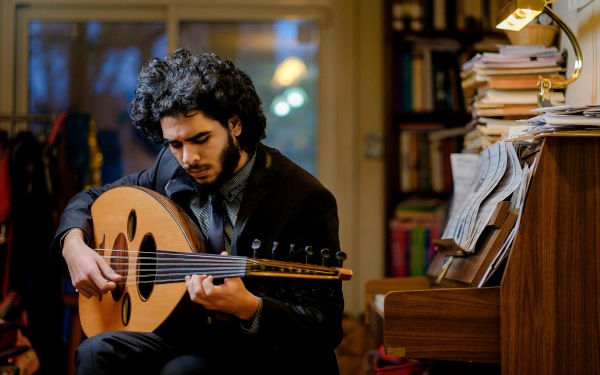 WASHINGTON — Ahmed Abdulateef’s gift for music made him a target in his hometown of Baghdad, where his father smashed his guitar and militants held a gun to his head for daring to follow a passion that has no place in their rigid brand of Islam.

He kept playing in defiance of his family’s disapproval, with clandestine jam sessions his only outlet until the day he was selected for a monthlong U.S. cultural program that would allow him to perform in California, New Mexico and other states he’d heard about only in movies. Once in the United States, he reveled in the ability to walk down a street without raising the suspicions of gunmen, his oud, a lute-like Middle Eastern instrument, slung across his back.

So precious was that newfound freedom that on Nov. 24 he applied for asylum in the United States, joining a surge of Iraqis seeking asylum since the Islamic State group’s rise. It might be a long wait for approval, however, perhaps years.

The processing pipeline for asylum requests from people who fear for their lives if they return to their homelands has grown clogged from the worsening conflicts of the Middle East. Islamic State has made matters worse, immigration attorneys say, because administrators are warier than ever about approving asylum for fear of extremists slipping into the United States.

“I don’t have a plan B,” Abdulateef said. “This is a new life, a whole new life, and it’s worth fighting to stay here.”

Abdulateef’s case might seem like a no-brainer: Isn’t the goal of the asylum program to give sanctuary to foreigners who face grave threats for political, religious or artistic expression? Plus, he’d already gone through extensive security checks before he received a U.S. visa in the first place. His fluency in English is another advantage.

But Washington immigration attorney David Garfield, who took Abdulateef’s case pro bono, said a compelling story and grave peril didn’t make approval a slam-dunk. Other Iraqis Garfield represents include female doctors fleeing kidnapping threats, a man who faces persecution for apostasy because he comes from a Muslim family that converted to Christianity, and a man who helped U.S. forces sort through evidence against members of Saddam Hussein’s Baath Party. Their cases have languished for nearly a year, their lives unsettled as they await the news that could change their futures.

“It looks like they’re just sitting on the Iraqi cases,” Garfield said. “All these letters, they just don’t get responded to. There’s been no decisions — no denials, no approvals.”

According to figures from U.S. Citizenship and Immigration Services, the subset of the Department of Homeland Security that handles asylum cases, the number of Iraqi asylum requests rose to 1,133 in fiscal year 2014, most likely the result of Islamic State offensives in that period, up from 788 the previous fiscal year. And while the number of individual approvals increased, the overall approval rate fell slightly — from 84 to 82 percent — and the number of pending cases at the end of the year doubled. The most recent figures show that more than 1,300 Iraqi asylum cases remain open.

A representative of U.S. Citizenship and Immigration Services said there’d been no procedural changes for handling Iraqi asylum cases. However, the official, who spoke on the condition of anonymity in accordance with the agency’s protocol, acknowledged a need for more asylum officers, citing a diversion of resources to deal with the surge in unaccompanied children entering over the southern U.S. border.

The representative said the agency didn’t track average processing times, so there are no handy statistics to confirm what attorneys and refugee advocates say: that a slowdown in Iraqi asylum processing is noticeable and most likely a result of closer scrutiny because of the fear of extremist infiltration. The representative agreed that the process can clog because of extensive law enforcement screenings, including through the FBI, the Departments of State and Defense, and other agencies.

It’s indisputable that Abdulateef, 23, faces life-threatening dangers if he returns to Iraq, where militiamen have a well-documented penchant for silencing musicians and other artists whose work they deem forbidden under Islamic law. His trip to the United States may even have made things worse. He delighted American musicians by playing Metallica on his oud, and they introduced him to the mandolin and the Appalachian dulcimer.

But the cultural exchange that brought him to the United States was sponsored mostly by the State Department, linking him to the U.S. government in the eyes of extremists.

Still, he’s likely to remain in limbo for months, maybe years, before hearing whether he’ll get to build a new life in the United States or return to Iraq and what he describes as “playing music until someone comes and kills me.”

He shuttles between Washington and South Carolina, crashing with friends in both places, trying to stay optimistic despite the uncertainty that colors his daily routine.

The waiting won’t be easy, Abdulateef said. But at least it’s an extension of his reprieve from Baghdad, a city he loves with little reciprocity. Religious extremism and lawlessness have made life very difficult for musicians across Iraq, a cruel turn of events given the country’s history of musical contributions, which stretches back centuries.

Abdulateef and other musicians were confronted by gunmen when they tried to play at the children’s cancer ward of a Baghdad hospital during the holy month of Ramadan. He didn’t leave home for two weeks after that, according to the affidavit in his asylum application.

Another time, religious pilgrims marching in a mourning ceremony spotted Abdulateef with his oud and took offense at an instrument associated with a celebration. They smashed it, according to the affidavit, and Abdulateef wrote that he “was lucky to escape without serious injury.”

He hid his instruments at his friends’ houses, bringing them out only occasionally to jam with friends on Baghdad’s Mutanabbi Street, one of the last refuges of the country’s battered, shrinking creative class. One of his friends in that circle told him about a program in which a U.S. nonprofit sponsors young musicians abroad to share their talents at concerts and other events in the United States. Abdulateef applied just before the deadline and spent all last spring awaiting word.

“I did nothing but check my email and refresh,” Abdulateef said.. “All of March there was no email. Then I opened my email on April 28.”

There it was: confirmation that he’d been selected as one of just 25 fellows from 1,500 applicants; he was the only one from Iraq.

“No words can describe that moment,” he said.

But Abdulateef had very few people with whom he could share his good news. He told his parents but they didn’t believe him and, once convinced that it was true, his father was so irate at discovering Abdulateef’s undercover life as a musician that he disowned him.

Abdulateef said he had no intention of applying for asylum when he arrived in the United States on Oct. 6; he said he didn’t even know how the process worked. He learned of the asylum route through conversations with American friends who steered him to Garfield, the immigration attorney, who iss also handling the asylum case of an Iraqi reporter who worked in McClatchy’s Baghdad bureau.

The affidavit Abdulateef submitted through his attorney is both singular in his experiences and emblematic of the dashed dreams of many Iraqis who hope to live in a country where basic freedoms are protected. He said he hoped the asylum officers who eventually consider his case would agree that he could do more to advance Iraqi musicianship outside the country, at least for now.

“All I want is to be safe from fear and be able to continue my musical career, which incorporates the concepts of collectivity, collaboration, cross-cultural understanding and tolerance,” Abdulateef’s affidavit says. “Unfortunately, these principles are not welcome in my country at the moment.”