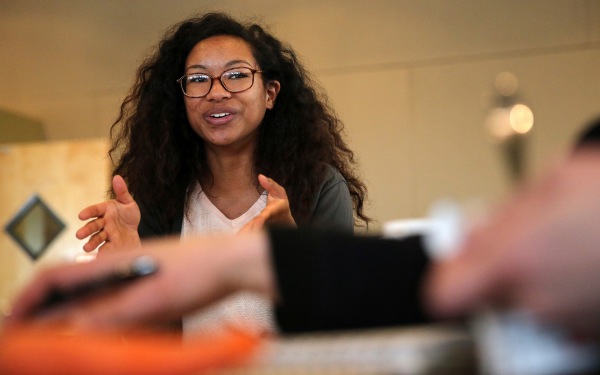 Brianna Tong, a senior at the University of Chicago, talks with volunteers at a phone bank.
(Credit: Anthony Souffle/Chicago Tribune/TNS)

CHICAGO — On a snowy evening, Brianna Tong gathered more than 50 students in a classroom at the University of Chicago to meet and dine with aldermanic candidates. The smell of curry filled the air as Tong told the audience that before becoming a campaign volunteer, she didn’t connect with public officials.

“(They) did not look like me ... did not represent people who looked like me,” said Tong, 20, whose father is Asian and mother is African-American.

Now she’s spreading the word about candidates who share her views. Jobs, she said, should pay wages that at least keep up with the cost of living and tax breaks should not be given to corporations that pay low wages.

“Does that sound exciting to y’all,” Tong asked at the end of a six-minute speech.

The faces of political, labor and community organizing campaigns in Chicago are getting younger. The groups are gaining the support of more millennials, who now are roughly ages 15-35, who are increasingly frustrated with everything from police profiling to the state’s budget deficit to the lack of well-paying jobs, especially in fields that match their college educations.

Last year, the average student-loan debt of a college graduate rose 6 percent to $33,000. And while the unemployment rate for college graduates is the lowest since the recession, many are squeaking by in jobs that historically have been filled by high school students. In December, there were more than 1.4 million unemployed people in the U.S. older than 25 with a bachelor’s degree.

“Everyone tells you, work hard, go to college, do well, and get a job and your life will be great, and that’s clearly not how it is for a lot of people,” said Tong, a college senior set to graduate this year with a bachelor’s degree in English and comparative race and ethnic studies.

Tong’s organizing work has been unpaid, but now she’s looking for entry-level positions with nonprofits and community groups, which pay about $30,000 a year. She committed herself to organizing when she realized its similarity to the civil rights movement.

“That’s something I heard about growing up from my mom,” said Tong, whose grandmother participated in the 1963 march in Washington at which Martin Luther King Jr. delivered his “I have a dream” speech.

Youth involvement in community organizing gained national attention during the 2008 presidential campaign of Barack Obama, himself a former community organizer in Chicago. Now millennials are a force in efforts to increase the minimum wage, transform immigration policy and improve economic conditions for some.

Ed Shurna, executive director for the Chicago Coalition for the Homeless, said millennials’ engagement is reminiscent of the rallies and protests of the 1960s. “It’s really exciting when I go to meetings and meet people who are doing this who have the same spirit that attracted me (to organizing),” said Shurna, 69. “It’s exciting because it didn’t happen for like 20 years.”

As recently as six years ago David Hatch, director of The People’s Lobby, a political advocacy group, recalls looking around a room filled with organizers and realizing that, while in his 50s, he was the youngest person in attendance.

“Here is where I think bad (economic) conditions helped,” said Hatch, noting his group now has vibrant campus organizations. Since The People’s Lobby began organizing students in 2011, it has sent about 100 to a weeklong training program.

Those who have become organizers say the work gives them a sense of purpose.

Wayne Hayer, 22, who says organizing saved him from a life of drugs and crime, was 19 when he met an organizer who offered him a job working with at-risk youth in a summer program. He said he took the job only because it offered a little money, but then organizers began mentoring him and sent him to the Midwest Academy, a Chicago-based organizing school.

Hayer said he attended workshops with college graduates and, to his surprise, kept up with them. “It was pretty amazing,” he said.

The experience helped him gain self-confidence, and he later became an organizer for a community group. He quit because he grew tired of knocking on doors and making phone calls, but after another job and some time off, Hayer said, he realized how much he missed organizing. Now he’s in school and wants to expand on the organizing skills he learned.

“The goal is to save the world. If you can save one life, it’s a life well-lived,” Hayer said.

Jennifer Ritter, executive director of One Northside, said other young organizers have come from movements such as Occupy Wall Street, which helped open their eyes to how the country’s slow recovery from the recession has dampened job opportunities. Most recently, Ritter said, young people have been fired up by the marches in Ferguson, Mo., after an unarmed black teenager was fatally shot by a white police officer.

Some organizers say the work has helped them develop a voice.

Despite a degree in peace, justice and conflict resolution that has left her with $60,000 in student debt, Rubio said the only kind of job she could find upon graduation was waiting tables, work she did in high school.

As an organizer, she spends her week working for an Illinois lawmaker and a local political organization.

Rubio said one of her first assignments was soliciting neighborhood support for a bus route that was slated to be eliminated, depriving residents of their lifeline to jobs.

“My heart was beating and I was so incredibly nervous,” Rubio said, recalling a visit to the home of an elderly woman. Rubio explained why she was there and was stunned when the woman wrote a check for the campaign and pledged to speak with her alderman.

Rubio said she didn’t think women could be powerful, but she is now leading groups and organizing people twice her age to help get people out to vote for progressive candidates.

Jeff Halm, president of the Chicago Young Republicans, said he started knocking on doors and making phone calls after he grew tired of people cracking jokes about how Illinois couldn’t pay its bills. He started attending a monthly happy hour sponsored by the group, which has 800 members ages 18 to 41.

During November’s election, Halm, 27, was among volunteers calling potential voters to encourage them to back Bruce Rauner for governor. Halm said he was proud to see Rauner win in a state that’s often written off as blue.

Halm added, “I wanted to feel like I was doing something instead of being an armchair activist.”