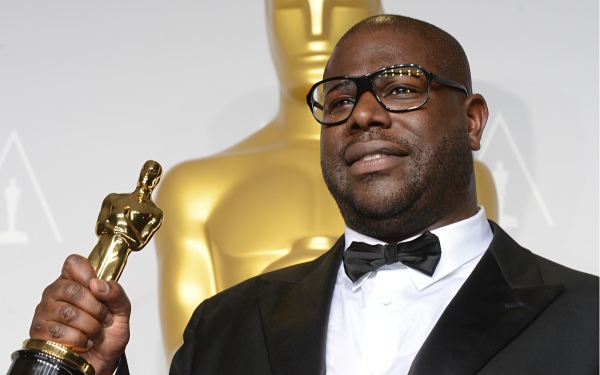 Steve McQueen with his Oscar for 12 Years a Slave.
(Credit: theguardian.com)

When director Steve McQueen accepted honors for best director and best picture at last year’s Academy Awards for his film “12 Years a Slave,” many applauded Hollywood for championing diversity. It was a fitting cap to a year that was called the “African-American film renaissance” by some media outlets.

But if you ask people inside the movie business, they’ll tell you it’s still a steep uphill climb for filmmakers of color.

“Hollywood is going to become a dinosaur if it doesn’t open itself up to more minorities,” said director Nailah Jefferson, an African-American woman, in an interview with the Scripps National Desk. “If you’re relying on a major studio, it’s hard to get a black film out there, unless you’re Tyler Perry or something.”

Jefferson’s debut film, “Vanishing Pearls: The Oystermen of Pointe á la Hache,” was released last year. The documentary centers on a small fishing village in Louisiana and its struggles after the 2010 BP oil spill. The 80-minute picture took Jefferson over three years to make.

“The stress came from raising the money and maintaining bills,” she said. “A lot of it is about who you know and sometimes (black directors) don’t know the right people.” Jefferson added that she loved every second of the actual filmmaking process, including editing the film in her mom’s attic and at a coffee shop in her native New Orleans.

Of course scraping together a budget and editing a movie in a closet or attic are practically rites of passage for any independent filmmaker, but ask other industry experts and they’ll tell you it was a minor miracle for “Vanishing Pearls” to have been released at all.

“It’s very tough today for black filmmakers but just as hard for female filmmakers,” said Tanya Kersey, executive director of the Hollywood Black Film Festival (HBFF). “There are plenty of ladies who aren’t getting through, both black and white.”

According to Kersey, the HBFF screens more than 100 films from black directors each year, leaving audiences confounded as to why so few of them end up in theaters.

“People walk away astonished wondering where these films come from,” Kersey said.

Kersey has decades of experience in Hollywood. Prior to founding the HBFF in 1998, she created and ran a trade publication called Black Talent News. She said the movie business isn’t run with an anti-black agenda but rather by studio executives who have many benefactors to please.

“I think if you had a black person running a major studio, they would be making the same decisions,” Kersey said. She said corporations — both foreign and domestic — have “certain people they want to see” in movies, often constricting a project’s cast and crew long before a camera ever rolls.

Both Jefferson and Kersey pointed to “Selma” director Ava DuVernay as a triumphant figure in the African-American filmmaking movement. In a landscape where hundreds of minority directors struggle to get a movie released, Kersey called DuVernay “the one who got through” in 2014.

“It should be all about entertainment and creativity at the end of the day,” Jefferson said, referring to her ideal version of the Hollywood system. “The number of remakes and reboots should tell you we need some new perspectives out there”

Of the 20 highest-grossing movies last year in the United States, only three were original stories not based on previously existing works or characters. Contrasting Jefferson’s view, Kersey estimated that the Hollywood status quo won’t change unless the box office demands it. “It’s up to what the audience wants to see,” she said.

But it’s often not that simple, as even popular black directors have run into issues getting studio support recently. Last year, writer-director Gina Prince-Bythewood penned an open letter to the public asking for support of her film “Beyond the Lights,” despite her 2008 film “The Secret Life of Bees” collecting nearly $40 million at the box office.

The Washington Post reported that in 2013, director Lee Daniels’ “The Butler” was passed on by all the major studios because of the implication that “Black casts and films that deal with race don’t resonate with foreign audiences.” “The Butler” went on to earn $176.5 million worldwide.

The 14th HBFF will be in Los Angeles this October. “Vanishing Pearls: The Oystermen of Pointe á la Hache” is now streaming on Netflix.

Special Features
Digital theater is all the rage, but could it destroy the live stage?
267 views

Special Features
Intimate portraits piece together the puzzle of Natalie Wood, the person and mother
347 views

Special Features
Now’s the perfect time to dive into musicals. Here are our critic’s top 7 to watch
249 views

Special Features
Oscars 2020: Who will win and who should win
869 views

Special Features
Secret screenings. Redacted scripts. How they make the twists in ‘This Is Us’
357 views
bid=||