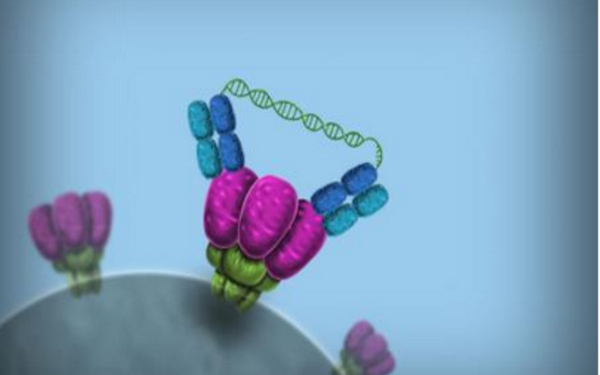 Antibodies generally attack a virus by binding with both of their "arms" to two of the spikes.
(Credit: Lance Hayashida / Caltech Marketing & Communications and the Bjorkman Laboratory/Caltech)

LOS ANGELES—Anybody who’s ever hung from the bars of a playground jungle gym knows it’s easier to latch on with two arms instead of one.

The same might be said of immune system antibodies: The “Y” shaped proteins do a better job of clinging to invader viruses when they use both of their arms, or binding sites, instead of just one.

In research published Thursday in the journal Cell, scientists at California Institute of Technology described how the structure of HIV often prevents antibodies from using both arms.

They also offer a genetically engineered solution to the problem. In fact, researchers say their altered antibodies are, on average, more than a 100 times better at neutralizing HIV than the body’s naturally produced antibodies.

HIV, the virus that causes AIDS, uses a variety of methods to evade the body’s immune system.

In the Cell paper, researchers focused specifically on how the number of protein spikes that stud HIV’s spherical surface help it to escape capture. It’s these spikes that antibodies will target and bind to in an attempt to inactivate the virus.

“If you look at a virus like flu ... it’s got 450 or so spikes,” said senior author Pamela Bjorkman, Caltech’s Max Delbruck professor of biology and an investigator with the Howard Hughes Medical Institute. “Antibodies can bind to it with both arms because they just cross-link between neighboring spikes.”

But with just 10 to 20 spikes sprouting from its surface, HIV presents a much more difficult target for the antibodies, and they end up connecting with only one arm according to the researchers. The distance between the spikes is too far for both arms to reach.

Bjorkman and lead author Rachel Galimidi, a graduate student in Bjorkman’s lab, attempted to address this situation by modifying the antibodies so that they essentially had longer reaches.

The trick however was finding the exact right length of DNA and the right combination of antibodies—a task that required some patience.

The next step will be to fabricate an antibody molecule that uses a protein-based link. DNA, the researchers said, was impractical for producing large quantities of reagent.

Once they accomplish this they can test the reagent in mice or other animals.