Super Bowl 2015: Katy Perry packs it all into halftime show 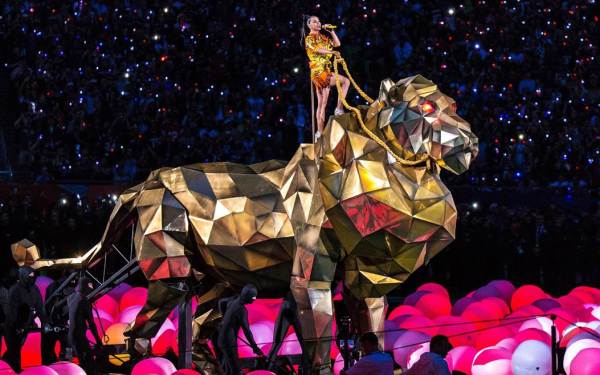 And when you’re playing the Super Bowl halftime show, as Katy Perry did Sunday night, you bring every other bit of spectacle you can think of — whether it’s mentioned in one of your songs or not.

Headlining the biggest gig in pop, Perry crammed a full-scale production into her 12½ minutes on (and above) the field of the University of Phoenix Stadium in Glendale, Ariz., beginning with her entrance astride a gold lion about three stories tall and ending with a regal wave from the moving platform that made the 30-year-old singer look like a shooting star.

But Perry, who appeared to be singing live, also brought real vocal power to her performance as well as the surprising dash of humility required to give over a sizable portion of her time to her special guest, Missy Elliott.

In all, it was the kind of pop extravaganza that even the NFL’s crusty classic-rock contingent could love.

Folks from that camp no doubt enjoyed “Roar,” with its lyrical nod to Survivor’s “Eye of the Tiger,” and “I Kissed a Girl,” which Perry transformed into a blistering grunge jam complete with cameo by a leather-jacketed Lenny Kravitz. (You got the sense that Kravitz, who hasn’t had a big hit in ages, was there for the same reason Red Hot Chili Peppers turned up last year with Bruno Mars: as insurance.)

For “Teenage Dream” and “California Gurls,” Perry flashed even further back in time for a “Beach Blanket Bingo”-style set piece full of toothy grins and goofy movement by dancers dressed as surfboards.

“Sing it!” she commanded the stadium during “California Gurls,” and sing it they did.

Costumed as a ball of flame, she performed “Dark Horse” on a digitally rendered chess board that kept tilting and buckling — a bolder, more forward-looking visual display than the Super Bowl usually offers.

And then there was Elliott, who zoomed through her three-song mini-set with verve and intensity.

A friend of Perry’s presumably since she appeared on a remix of the singer’s “Last Friday Night (T.G.I.F.),” Elliott made huge waves in hip-hop in the late ‘90s and early ‘00s but then faded from view; she’s been putting off a real-deal comeback for the better part of a decade now.

Here, though, it was hard to see what she’s waiting for: “Get Ur Freak On,” “Work It” and “Lose Control” sounded no less futuristic than they did when they came out, with Elliott singing and rapping even more confidently than she did back then.

This veteran is ready again for prime time.

Inevitably, Perry closed the show with “Firework,” the surging anthem of self-empowerment — here given a handsome Old Hollywood makeover with lush strings — that provided all the excuse the Super Bowl needed to fill the Arizona sky with fire and smoke.

Call it truth in advertising — and then some.