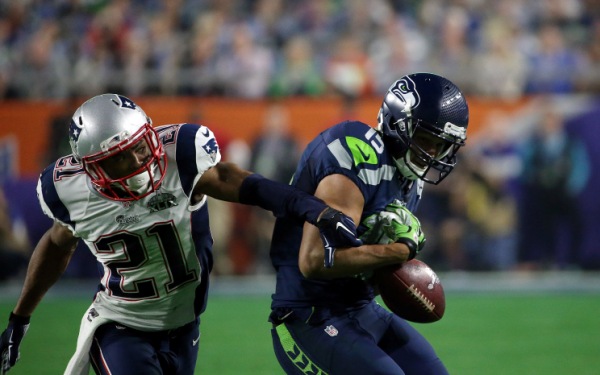 GLENDALE, Ariz. — The Seattle Seahawks had history in their grasp, a dynasty in sight, sitting just a yard away. An agonizing, elusive, maddening and ultimately haunted yard.

They had the right man leading them down the field in Russell Wilson, and the game’s most bruising runner waiting to be unleashed. We knew how this was going to end, because we’ve seen it so many times, the Seahawks seizing the moment and pulling the glory onto their side.

They live for these moments, but at this crucial time, on this exalted stage, it all went awry. What resulted was a play as shocking as anything in sports maybe since the ball went through Bill Buckner’s legs, and a loss that will torment the Seahawks for perpetuity.

In the flash of Wilson’s arm moving forward and the lightning quick move of New England cornerback Malcolm Butler jumping in front of intended receiver Ricardo Lockette, the Super Bowl trophy was yanked away from the Seahawks.

In the span of 30 seconds or less, what would have been another stirring comeback win, marked by a heroic catch from Jermaine Kearse and another steely eyed drive engineered by Wilson, instead turned into a meltdown of staggering proportions.

Doug Baldwin would call it “an unfortunate series of events,” but history will judge it much more harshly. The question of why the Seahawks decided to pass when Marshawn Lynch — the game’s best at fighting for the end zone — was no doubt drooling for the ball, will never be answered to the satisfaction of Seahawks fans.

Most Seahawks players said they didn’t question the decision, that they defer to the coaches and try to execute whatever play is called. But Baldwin displayed typical candor when asked if he was surprised Lynch didn’t get the ball.

“All of us are surprised,” he said, and launched into an explanation about how much time was left and how their options might be compromised if a running play didn’t work. Then he stopped in mid-sentence and sighed.

“I don’t know, man. I was just trying to make up an explanation here. I really don’t know.”

Baldwin added that it’s crucial for the team to stick together, correctly forecasting that the recriminations and finger-pointing coming out of the loss will be intense.

“Everyone’s going to want to blame something or somebody,” he said. “There’s plenty of blame to go around. We have to stick together, take this one on the chin, and keep moving forward.”

Seahawks coach Pete Carroll took the blame for the ill-fated call, telling the team in his postgame address the loss was his fault.

“I told them that clearly,” he said. “I didn’t want them to think anything other than that. They busted their tails and did everything they needed to do to put us in position, and unfortunately it didn’t work out. A very, very hard lesson.”

Offensive coordinator Darrell Bevell said the pass call fell on his shoulders, because he’s the play-caller. And Wilson said, “I put the blame on me. I’m the one who threw it.”

Butler would say it all came down to a subtle look he saw Wilson make toward his receivers.

“He kept his head still and just looked over there, so that gave me a clue,” he said. “I just knew they were going to throw. My instincts, I just went with it. I just went with my mind and made the play.”

And with that play, the narrative of a season, and of a franchise, took a stunning detour. Gone was the Seahawks’ opportunity to establish themselves as a legitimate dynasty with two consecutive Super Bowls. Wilson’s reputation as the quarterback who invariably rises to the moment at the most critical times took a major hit as well.

And just moments after all of that good stuff appeared to be happening in another script of implausibly dramatic proportions. Chris Matthews, whom the Seahawks signed out of a job at Foot Locker, making big play after big play? Kearse making a spectacular juggling catch, snaring it while on his rear end to put the Seahawks on the precipice of victory?

You could barely make that up, just like their win over Green Bay in the NFC title game. You could practically hear the whooping in the locker room, see the celebrations in the streets of Seattle and anticipate another joyous downtown parade.

But that’s all wishful and wistful dreaming now. Instead, the Seahawks came to the interview room hollow-eyed and visibly shellshocked, trying to talk about a defeat they still couldn’t process. Kearse’s play was suddenly a footnote, Matthews’ heroics an afterthought, all because of one play that changed everything.

“Obviously, it’s a hard play, because you just saw your dreams go down the drain,” said Michael Bennett.

Bennett’s frustration bubbled over when asked how bad it felt to lose a game like that.

“About as … I don’t know. It feels bad. We lost a championship. What kind of dumb question is that?”

There was a lot of talk from players about how the Seahawks still have the young nucleus to come back to the Super Bowl. They said the defeat, no matter how agonizing, would not break them.

“There’s a lot of things we can take from this,” Bennett said. “We never want to feel like this again, so you train harder to make sure when you do get another opportunity, it’s different.

But it hurt deeply, because it always hurts more to have a victory in sight and then pulled away. Especially when the play call was as baffling as this one.

“My mom always says to find the value in a valley,” said Baldwin. “This definitely was the valley, and we’ll find value in it and move forward.”

But for the Seahawks, the pain of this moment will live on forever.