Brady has the right words for his teammates during crunch time 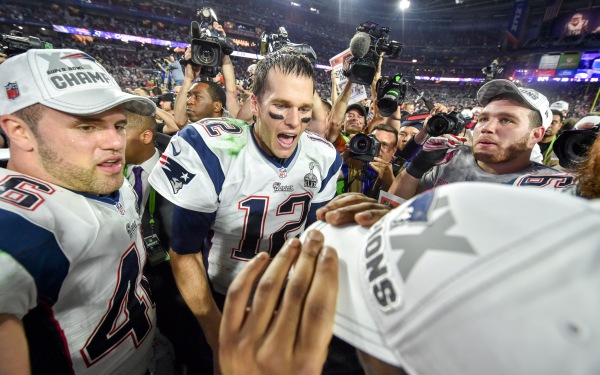 GLENDALE, Ariz. — Quarterback Tom Brady and the New England Patriots offense stood over the football with 64 yards of green, spray-painted grass between them and the go-ahead touchdown.

There had been more than 50 minutes of Super Bowl XLIX drama before this moment and there would be 6:52 of stomach-flipping madness to come.

Brady walked into the huddle, looked his teammates in the eye and told them they needed a “championship drive.”

Little did the veteran quarterback know how prescient he would be, that the possession would end with a touchdown pass to Julian Edelman, that the score would hold up as the difference in the game as Seattle’s answer fell a yard short, and that New England would win by a score of 28-24, its first title since the 2005 Super Bowl.

Brady finished with a Super Bowl-record 37 completions, for 328 yards and four touchdowns, and he lifted his fourth Lombardi Trophy.

“When you’re nervous and antsy, you look over there at Tom, and he’s just all calm,” wide receiver Brandon LaFell said. “That gives you something that you process and just relax. The guy with the ball in his hands every play, if he’s that calm, we’re going to win this game.”

The clash between Brady and the Legion of Boom more than lived up to the billing.

The Seahawks landed the first blow as Jeremy Lane intercepted a Brady pass in the end zone during the first quarter, the quarterback taking a shot to the ribs from Michael Bennett that caused the pass to flutter in the warm air.

“I never feel out of the game when I’m with Tom,” LaFell said afterward, but that confidence was being stretched to its breaking point.

By the time Seattle went three-and-out midway through the fourth quarter, the tide had shifted again.

New England fans were outnumbered by Seattle fans all week here in Arizona and outshouted for most of Sunday night. But they were making themselves heard now.

Brady had marched New England down the field the previous time the Patriots touched the ball to foster some momentum. Brady’s touchdown pass to Danny Amendola, the one that made it 24-21, broke Joe Montana’s Super Bowl record for career touchdown passes with 12.

“Tom’s the best ever,” receiver Julian Edelman said. “I’m a big Joe Montana fan. I love him to death. I thought he was the best in everything. He won four, but that didn’t have a salary cap back then. He had some great defenses and great players around him. To win four with the salary cap, it’s hard to argue against that.”

Just as they had in the first half, the Patriots were methodical, chewing up the field in bits. Brady checked down more often than not, to Amendola in the flat and Shane Vereen sneaking out of the backfield.

They did so again with the game on the line.

Brady hit Vereen eight yards, then five more. He found Edelman for nine and Vereen for six. Rob Gronkowski broke open up the seam for a 20-yard gain, then shook free on the right for an additional 13.

Brady finished the drive 8 for 8 — he even had another completion nullified because of offensive pass interference — and pushed the Patriots down to the Seattle 5-yard line with a short pass to LaFell.

Two plays later, Edelman shook free in the end zone to give New England its first lead since the first half.

Brady, 37, shook off any suggestions about his legacy afterward, insisting he still has “a lot of football left.”

He was still just trying to process what just happened, the whirlwind finish that began with that 10-play, 64-yard drive.

“We’ve been on the other end of this twice now and been ahead late and not been able to make the plays to win,” Brady said. “This time, we did. What an experience. A lot of mental toughness by our team, a lot of physical toughness.”

The example was set by their leader, by a few choice words in a huddle with the quarterback’s name bouncing around the stadium and the Super Bowl hanging in the balance.