With ‘Empire,’ diversity becomes the watchword on television 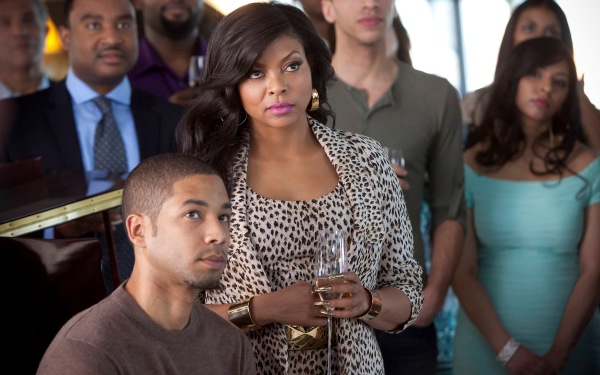 The 2014-15 TV season was already shaping up to be a watershed year for diversity on the major networks, thanks to the success of ABC’s “black-ish” and “How to Get Away With Murder.” The most-watched new comedy and new drama of the season, respectively, both shows featured African American leads and came from creators or executive producers who were also African-American.

Then along came Fox’s “Empire.”

The hip-hop drama starring Terrence Howard as an ailing music mogul and Taraji P. Henson as his extremely colorful ex-wife was an instant smash, with 9.9 million viewers tuning in to its Jan. 7 debut on Fox.

“Empire” has since followed the reverse trajectory of most freshman hits: Its overall audience has steadily grown each week, up nearly 15 percent to 11.3 million for its most recent Wednesday night broadcast — a sign of the soap’s strong word of mouth and potent must-see factor. It is also one of the most social shows on television, ranking in the top 10 of Nielsen’s Twitter TV ratings.

The series, from creators Danny Strong and Lee Daniels, the team behind the 2013 hit “Lee Daniels’ The Butler,” has now topped “How to Get Away With Murder” to become television’s highest-rated new drama. It’s also brought Fox, which finished last season in fourth place and suffered a string of flops this fall, back from the brink.

“Empire” and shows like it not only are bringing more diverse faces to prime time, but also are harnessing the power of black viewers, a group long neglected by broadcast networks despite the fact that African-Americans watch a disproportionate share of traditional television — an average of 201 hours a month in the third quarter of 2014, according to Nielsen. While all three series are broad-based hits attracting viewers of all races, they are also particularly popular with black audiences. “Empire” is most dramatically so: Nearly two-thirds of its viewers under 50 are African-American.

“(The success of these shows) says that black people watch TV,” said Daniels, who is African-American, in an email. “Not only watching, but we are coming out in droves to watch. We also go to the movies and to the theater, especially if we can identify with the subject matter and the people that we see.”

Social media are also a major factor propelling the success of black programming. Young African Americans are unusually heavy users of Twitter, a fact that has helped shows like “Empire” and “How to Get Away With Murder” become appointment viewing — the kinds of shows that not only must be watched, but also must be watched in real time. About 40 percent of 18- to 29-year-old African-American Internet users are on Twitter, compared with only 28 percent of their Caucasian counterparts, according to a report by the Pew Research Center.

Still, the broadcast networks have historically been reluctant to put black characters at the center of their shows — particularly dramas. While there have been numerous successful African-American sitcoms — most notably “The Cosby Show” but also “Good Times,” “Sanford and Son,” “The Jeffersons” and “The Bernie Mac Show” — dramas featuring primarily black ensembles have been attempted only rarely.

The most recent failed effort came in 2010 with “‘Undercovers,” an NBC drama featuring the black actors Gugu Mbatha-Raw and Boris Kodjoe as a pair of attractive former CIA agents lured back into the spying game. Despite a major marketing push from the network and the involvement of high-profile producer J.J. Abrams, “Undercovers” was canceled after barely a month on the air. At the time, the series, which did not explicitly deal with race, was considered groundbreaking for its color-blind casting.

“I think that was a cautionary tale,” said Darnell Hunt, director of the Ralph J. Bunche Center for African American Studies at UCLA. “A lot of people who had been cynical about the industry said, ‘Well, that’s the last time they’re going to try a network drama with African-American leads.’”

Cut to 2012, when “Scandal” debuted on ABC. The political soap opera from creator Shonda Rhimes featured Kerry Washington as the first African-American female lead in a network drama in nearly four decades. Propelled by social media, the series became a huge hit for ABC.

Its success paved the way for “How to Get Away With Murder,” executive produced by Rhimes and starring Oscar nominee Viola Davis as a sexy and cutthroat law professor. Both shows feature multiethnic ensembles and are popular with a broad cross-section of viewers.

“I think that there’s a wave going on right now, and I credit a lot of the success to Shonda,” said “black-ish” creator Kenya Barris.

While Rhimes has certainly been a trailblazer, proving that shows with black writers and stars can be broad-based hits, the rise of bold cable dramas has also encouraged broadcasters to take bigger risks. For instance, “Empire” combines the over-the-top family feuds of a 1980s prime-time soap like “Dynasty” with an original soundtrack from mega-producer Timbaland and a willingness to tackle taboo issues like homophobia in the hip-hop community.

Meanwhile, “How to Get Away With Murder” features a female protagonist who cheats on her husband and coaches her students in the art of winning at all costs — the type of morally complicated lead character who is rarely found on network television and is almost always a male.

“Television right now is more open to not only diversity but also to creativity in general,” said “Empire” co-creator Strong. Multiple networks bid on the project, according to Strong, an outcome that he said only became possible “in literally the last 18 months.”

Cable has led the way not just with riskier storytelling but in its targeting of black viewers. Hits like Bravo’s “The Real Housewives of Atlanta” or OWN’s “The Haves and the Have Nots” have shown there is an appetite for African-American melodrama — be it real or scripted. Lifetime has also fared well with movies aimed at African-American women, such as the recent Whitney Houston biopic “Whitney” and the romantic comedy “With This Ring.”

The emergence of digital platforms like Netflix has also helped nudge broadcasters. “Orange Is the New Black” features what may be the most diverse ensemble in American television, predominantly consisting of women of color and is, perhaps not coincidentally, also one of Netflix’s most-watched original series to date.

The increasingly diverse television landscape stands in contrast to the world of feature film.

Brian Grazer, an executive producer on “Empire” who’s had great success with films featuring African-American stars (“Boomerang,” “Life,” “The Nutty Professor”) notes that “it’s always been a challenge” to convince studios that such projects are viable. “It’s a huge bummer,” he said.

For only the second time in two decades, this year’s batch of acting Oscar nominees is entirely white. It’s noteworthy then that “Empire” features three Oscar nominees — Howard, Henson and “Precious” star Gabourey Sidibe — while “How to Get Away With Murder” has two-time nominee Davis. The actress has spoken bluntly about the fact that she was drawn to “How to Get Away With Murder” because of the scarcity of compelling film roles available to actors of color.

“I have the same background as some of the most prominent, classically trained Caucasian actors,” the Juilliard alumna said in an interview last year, “yet I haven’t had the material to reflect my ability.”

The migration of talent is likely to continue as broadcast’s diversity push intensifies in 2015. The trend is being led by ABC: On Wednesday, the network will debut “Fresh Off the Boat,” the first predominantly Asian-American comedy on broadcast television since 1994. It will be followed in March by “American Crime,” an ambitious, high-minded exploration of race and class from “12 Years a Slave” screenwriter John Ridley.

Other networks are following suit. Earlier this month, NBC Entertainment Chairman Robert Greenblatt announced that the network is developing an eight-hour Underground Railroad miniseries produced by music legend Stevie Wonder, and he also said he is mulling the possibility of staging “The Wiz” as the network’s next live musical instead of “The Music Man.”

Even CBS, currently the least diverse broadcast network (its prime-time shows in fall 2014 were 79.2 percent white, according to a recent report by the Associated Press), has ordered a pilot based on the Jackie Chan-Chris Tucker comedy “Rush Hour.”

Given the shifting demographics of the U.S. population, which is on track to be majority minority by 2050, diversity is good for the bottom line.

The nation’s changing demographics may be irrefutable, but Hollywood is a fickle town. If “Empire” or any of this season’s other African American-skewing series flame out, there is a danger that black ensembles could be to this season what “Friends” and “Mad Men” rip-offs have been in years past: a momentary obsession quickly abandoned by skittish television executives.

“I’m terrified of that,” Barris said. “I don’t want to be part of a passing trend.”

(Yvonne Villarreal contributed to this report.)

TV Time
The Paley Center celebrates the holiday with with a look at "Jingle Jangle: A Christmas Journey"
396 views