Wife of beheaded journalist ‘proud’ he conveyed tragedy of war 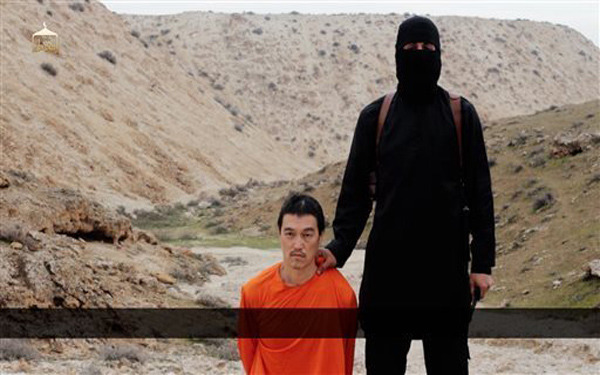 This image made from a video released by Islamic State militants on Saturday, Jan. 31, 2015.
(Credit: AP photo)

TOKYO — The wife of journalist Kenji Goto said she was proud of her husband’s passion for conveying the “tragedies of war” after his beheading by Islamic State.

“My family and I are devastated by the news of Kenji’s death,” Rinko wrote in a statement published by the Rory Peck Trust, a U.K. group that supports freelance journalists. “I remain extremely proud of my husband who reported the plight of people in conflict areas.”

Chief Cabinet Secretary Yoshihide Suga said Sunday that a video showing Goto’s murder was likely to be genuine. Prime Minister Shinzo Abe was defiant after the extremist group said it would target Japan because of its attempts to help countries contending with the group, and pledged to increase humanitarian aid to the Middle East.

Goto’s death comes a week after Islamic State killed fellow Japanese captive Haruna Yukawa. The militants issued a series of threats against the pair, starting on Jan. 20, days after Abe pledged $200 million in aid to nations fighting the group.

After initially seeking a ransom, the militants switched their demand. They pledged to kill Goto and Jordanian pilot Moath al-Kasassbeh unless Jordan released a failed suicide bomber on death row.

The video, released early Sunday Japan time, didn’t mention the fate of Al-Kasassbeh, who was captured in Syria on Dec. 24 after his plane crashed in Syria on a bombing raid against Islamic State.

The group had set a deadline of Jan. 29 for Jordan to turn over Sajida al-Rishawi, an Iraqi woman whose suicide belt failed to detonate during an attack on hotels in Amman in 2005 that killed dozens. Jordan said it was willing to free Al-Rishawi if Islamic State provided evidence the pilot was alive and included in the swap for Goto.

Jordan never received that proof and the failed suicide bomber remains in jail. The Jordanian government is still willing to release Al-Rishawi in “return for our son and our hero,” Minister of State for Media Affairs Mohammad Momani said Sunday.

“Jordan did not spare any effort to preserve the life of the Japanese hostage and secure his release,” Momani said in a statement. “Jordan was in constant coordination with Japan. Islamic State rejected all attempts by specialized agencies to release the hostage, which proves its insistence on terrorism and killing.”

President Barack Obama condemned the “heinous murder” of Goto in an e-mailed statement. “Our thoughts are with Mr. Goto’s family and loved ones,” Obama said, noting that in his reporting, Goto “courageously sought to convey the plight of the Syrian people to the outside world.”

“We stand today in solidarity with Prime Minister Abe and the Japanese people in denouncing this barbaric act,” Obama said.

The killing of Goto, a week after the group killed Yukawa, a self-styled security consultant, brings a tragic end to the almost two-week crisis.

Yukawa was murdered after Japan failed to pay the $200 million ransom initially demanded by the group, a sum that matched Abe’s aid pledge on Jan. 17. In Sunday’s video, Islamic State said the aid offer was a “reckless decision to take part in an unwinnable war.”

The hostage standoff gripped both Japan and Jordan, with loved ones and friends of Goto and Al-Kasassbeh taking to the streets in Tokyo and Amman.

“It was his passion to highlight the effects on ordinary people, especially through the eyes of children, and to inform the rest of us of the tragedies of war,” Goto’s wife Rinko added in her statement.

Goto, who had two daughters with Rinko, was captured by Islamic State after traveling to Syria in October.

“Kenji, why did you die? You always cared about the world and you were a friend of justice,” Goto’s mother, Junko Ishido, said as she held a large photograph of her son in front of television cameras.