Neve Campbell: Sheds Her Inhibitions and More in When Will I Be Loved 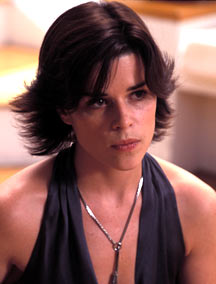 She’s no longer Julia Salinger, the San Francisco treat, from the dramedy "Party of Five," or the kick-ass heroine Sydney Prescott from the popular Scream trilogy. No, this time around Neve Campbell is the sexually invigorated Vera — a woman who outsmarts two men at their own game.

Under James Toback’s direction, Campbell stars in IFC Films’ When Will I Be Loved (in theaters Sept. 10), a project in which she sheds her inhibitions and her nudity clause to bring out the complexities of her strong-willed character.

"There are many aspects to Vera," says Campbell. "Yes, she’s strong and intelligent, but she’s also vulnerable and intellectual in different ways."

Toback agrees with his muse’s assessment by adding that Vera is "smart, erotically charged, beautiful, [but also has] a lot of repressed anger [and is] indolent. Aesthetically inclined to all the things that make someone watchable."

Toback approached Campbell with a 35-page script, which had no ending, and a 12-hour conversation that started at a hotel and ended with a visit to a mutual friend’s house. The 12-day shoot was a work in progress where collaborative ideas were not only expressed, but encouraged. Campbell discussed with her illustrious director what would work with her and what wouldn’t.

In one racy scene, Campbell becomes intimate with another woman while videotaping their hot romp. Toback gave Campbell eight women to choose from for this delicate moment, which was shot behind a lacy curtain to give off a seductive vibe.

Campbell’s character is a young woman who explores her sexual side with men, a woman and even herself. Campbell captures Vera’s curiosity and intelligence well, making moviegoers believe that she is Vera. She easily manipulates her hustler boyfriend, who pimps her out to an aging Italian mogul.

While both men think she’s in over her head with them, in fact, the opposite is true. Campbell therefore takes Toback’s femme-fatale idea and gives it life, portraying the character with realistic conviction.

Do we root for her? Do we hate her? One thing is clear — we can’t stop watching her.

According to Campbell, the key to preparing for this controversial role was to be open and aware of where the character was at each moment. Campbell adds, "then be open to responding to whatever is coming at you from the other actor."

She’s no stranger to sexually driven films, which Campbell clearly demonstrated in her part as Denise Richardson in Wild Things, although the actress doesn’t believe that all her films required nudity. For Loved, however, Campbell let her guard down.

"I wasn’t hesitant. I’ve had issues in the past with nudity when I felt that the scene with nudity in the films had nothing to do with the films themselves — [when I thought] they were solely there for box-office draw. As this film is about sexual exploration and curiosity and power, it seemed to make sense to me to see this character in the raw."

The Ontario native could be dubbed the new indie queen based on her more recent filmic resume. Campbell understands the nature of the Hollywood game, where movie screens are filled with the top moneymakers. But it wasn’t a conscious decision, on her part, to remain solely involved in independent film. According to the actress, that world just fell into her lap.

"The only reason I’m doing independent films is because they have the better scripts," says Campbell, who turned down a majority of scripts given to her for lack of imagination and quality. She trusted Toback’s writing skills (Bugsy, Two Girls and a Guy, Black and White) because of his keen understanding of everyday vernacular.

Campbell has already added producer to her resume and, according to the actress, she one day hopes to write and direct as well. For now, though, it’s back to the studio grind, re-teaming with her Drowning Mona cast mate Danny DeVito, along with Kathy Bates and Ron Livingston, for Relative Strangers. As for her current role in Loved, Campbell mischievously interprets the film by saying: "Don’t underestimate people around you."

When Will I Be Loved releases in theaters Sept. 10.