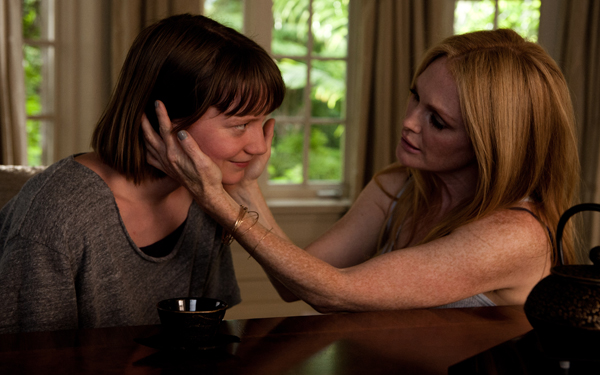 Julianne Moore and Mia Wasikowska star in Maps to the Stars. (Focus World)

Amidst the glitz, glamour and the sign that reigns over the city, taunting its citizens to reach for stardom, lies a dark buzz of dysfunction. This is a city where dreams become a reality, or more accurately, where illusion is mistaken for reality and truth becomes fog in the distance—a fog of makeup, costume and façade. Welcome to Hollywood. Welcome to David Cronenberg’s Hollywood.

This is the world Cronenberg’s latest psychological drama, Maps to the Stars, explores. It’s an odyssey of the bizarre behavior that fame, celebrity, and desperation can drive us to. We expect something off the beaten path from Cronenberg, who brought us the The Fly (1986) and the engrossingly intense Eastern Promises (2007). But this time he may have wandered a bit too far into the bizarre.

His Los Angeles story follows the eccentric Weiss family who is obsessed with celebrity culture. From the father (John Cusack), a famous TV self-help guru, to the mother (Olivia Williams, An Education), the manager of her preteen brat celebrity son, Benjie (Evan Bird, The Killing), the Weiss’ livelihood leans on the shoulder of fame and fortune. If Benjie’s rehab as a thirteen year old weren’t telling enough, wait untill you meet their daughter, Agatha (Mia Wasikowska, Stoker).

Schizophrenic and celebrity-obsessed, Agatha was sent to a mental hospital seven years prior when she lit her family’s house on fire with her drugged brother inside. So, it’s no surprise that her estranged family becomes uneasy and maniacal when she unexpectedly shows up in Los Angeles, hiding her burns underneath long black gloves and somehow scoring a personal assistant job for washed up actress Havana Segrand (Julianne Moore). In fact, her arrival marks the deterioration of everyone’s sanity, where memories become hauntings and illusion is stripped away to reveal ugly and deadly truths.

With a cast of high-caliber Hollywood stars, Cronenberg’s film is a meditation on a tumultuous industry. But much like the message he seeks to evoke, the talented players are one dimensional, stuck on the idea that because their characters are superficial and delusional, they need not attempt to dive too far within themselves for their performances.

While Moore, who rarely fails to impress, does deliver her wildly delusional character with perfect pathetic misery, and Wasikowska does convey her usual oddball charm with ease, it’s in the interplay between the characters that comes off as reactionary rather than immersive. When Agatha and Benjie see each other for the first time since the fire, the tension and fear that ought to be heavy in the air falls to the ground within seconds. This may be because Bird (as the scumbag Benjie) seems completely inexperienced throughout, often displaying that he is indeed acting rather than melting into the role.

Maps to the Stars attempts to create a complex and profound world of human folly, but the results are messy and unfocused as Cronenberg ends up taking on too many themes, barely skimming the surface of most of them. For example, much of the plot is driven by a distant theme of incest, which may be bizarrely fascinating, but it becomes drowned out by other oddities embedded throughout.

Undeniably, this madness is real. We have seen too many accounts of fame and its accompanying dangers. While Maps to the Stars attempts to unmask the insanity of an industry, the message gets buried in over-the-top melodrama, obscuring us from what’s within.

Maps to the Stars will be released in theaters and on VOD on Feb. 27.