Hot party spots for spring break, from Florida to Iceland 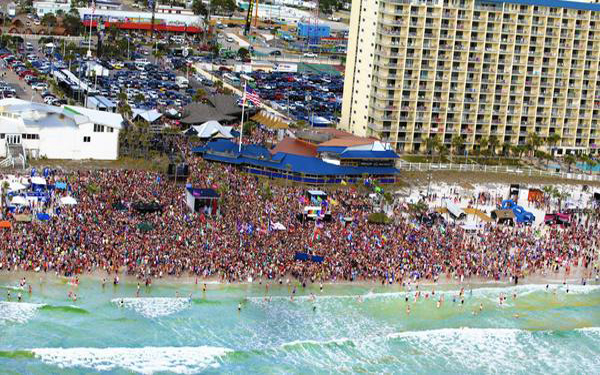 It’s not long until spring break time for the college crowd. From February through March, students around the U.S. will be getting away from campus. An outing with the family may be in the cards, but for many the attraction is partying.

Warm-weather getaways are traditional, but some more wintry destinations have their appeal too.

Here’s a handful of possibilities, both traditional and nontraditional:

Families flock to this beach-laden town in Florida’s Panhandle in the summer, but it also shows up on many lists when you Google “spring break partying.”

Twenty-seven miles of white sugar-sand beaches are an obvious attraction for those looking to work on their tans or beef up their volleyball serve. And there are more than 15,000 lodging options, ranging from condos to motels to beach houses.

Getting there has gotten much simpler with the opening of Northwest Florida Beaches International Airport, which is served by Southwest, Delta and United Airlines.

A highlight for spring breakers is the free Luke Bryan Spring Break Concert March 11 and 12. For the last six years, Bryan, the 2014 Entertainer of the Year in the Country Music Awards, has performed two days in March on the beach at Spinnaker Beach Club. Depending on who’s doing the estimating, crowds range from 15,000 per concert to 100,000.

You can get information on spring break lodging, special events and more in Panama City Beach at pcbeachspringbreak.com.

Also easy to get to and providing plenty of sun and sand are the Bahamas, just a short plane ride from Miami.

Not that we’re encouraging over-imbibing, but we are talking about destinations for partying, and the legal drinking age there is 18.

Breezes Bahamas bills itself as a “super-inclusive” resort and sits on 1,000 feet of Cable Beach in Nassau. That super-inclusive tag means virtually all food, drink and activities are included in the daily rate, which can be as low as $175 per person double occupancy.

Find info on Breezes at breezes.com, or look for deals on other resorts at tinyurl.com/psj24cc.

Even if you stay at an all-inclusive, you may want to check out the scene at hot spots such as Senor Frogs or The Daiquiri Shack, both in Nassau.

There are also plenty of companies offering “booze cruises” (their term, not ours) that will set you back $70 or so for an outing on the water that includes snorkeling, food, drinks and music. Boozecruisebahamas.com or Bahamas Cruise Excursions (tinyurl.com/a6397wo) are just two of the possibilities.

Snowy and chilly Montreal may be one of the last places you’d think of for a spring break getaway, but its young residents do know how to party.

A CNN ranking of the world’s top night-life cities, which used criteria like how late and how often people party and the hotness of the locals, placed Montreal at No. 7 — ahead of Las Vegas, Buenos Aires and Bangkok.

MTL Blog, which keeps track of the entertainment, food and night scene in the city, pointed out in its 10 Reasons Why Montreal Is The Best City For 20-Year-Olds that its drinking age is 18 and it’s one of the few cities in Canada where you can buy wine and beer without going to a liquor store. And many of those places are open 24 hours a day.

There are also special events such as Igloofest, an outdoor celebration of electronic music, though it runs for four weekends in January and early February, so it might not match up with spring break.

Because the city is also home to several major universities, there’s a wealth of friendly young Canadians to meet up with at the many night spots.

You can read all of MTL Blog’s reasons the city is great for the college crowd and also check out where you can find good eats and interesting events at tinyurl.com/n4clqmq.

This is another colder-weather spot that might not be on your spring break radar but should be.

Reykjavik is so popular for partying that some call it the Nightlife Capital of the North. Though it’s in Europe, it’s only about a five-hour flight from East Coast cities such as Boston and New York.

Music’s big in Iceland, and the city has many bars, pubs and clubs that serve up live entertainment nightly. During the week most bars must close by 1 a.m., but hours can extend to 3 or later Thursday through the weekend. You have to be 20 to drink there, and they do check IDs.

There are also events such as Sonar Reykjavik (tinyurl.com/qj8p2e8), an international music festival taking place in mid-February this year.

If you can drag yourself away from the pubs at night, there is the possibility of seeing the northern lights.

During the day, if you haven’t partied too hard the night before, there are activities in the countryside such as ice climbing, four-wheel-drive tours or snowmobiling. Or you can veg out with a soak in the Blue Lagoon, near the airport.

Be aware, though, that Iceland can be pricey.

Find info on the city’s nightlife at tinyurl.com/pdgjfa4.

Among the attractions will be ski and snowboard competitions, including the KickAspen Big Air Invitational, featuring night competition at the base of Aspen Mountain. That’s just for watching, of course, but there’s also the Terrain Park Boot Camp with instruction for neophyte skiers and boarders. And, naturally, there are lots of runs to tackle.

Spring Jam events and lodging/ski packages are listed at tinyurl.com/k8n9wwa.