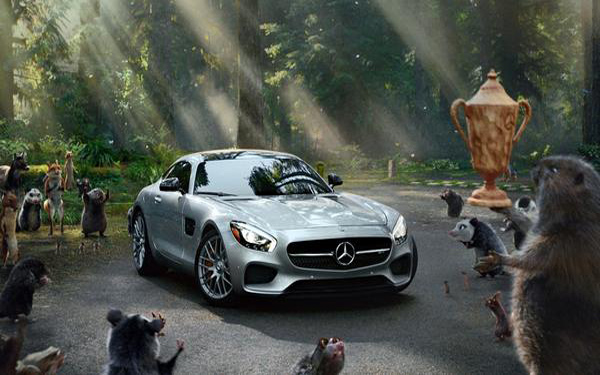 Mercedes-AMG's Super Bowl spot for the new GT had the biggest impact of any auto ad, per Edmunds.com
(Credit: Mercedes-Benz USA / Wieck)

The New England Patriots may have walked away from Super Bowl XLIX with the Vince Lombardi Trophy, but in the world of car ads, it was Lexus, Mercedes-Benz and Kia that came out on top.

The four automakers were among the 11 brands that ponied up trunkfuls of money to run ads during the championship game between the Patriots and the Seattle Seahawks.

Car-shopping websites Edmunds.com and Kelley Blue Book (KBB.com) each tracked search traffic on their respective sites to see which companies flopped and which rocked. Both brands and individual models were tracked.

"All the automakers who advertised during the Super Bowl succeeded in getting the attention of car shoppers during this big game, and that’s something to celebrate," said Edmunds.com senior analyst Jessica Caldwell. "But it’s a lot easier to create a big bang than it is to sustain the momentum, and that will be the big challenge for all Super Bowl advertisers moving forward."

Lexus had a particularly good day. Its RC350 spot played up the agile nature of the coupe with some hot-shoeing in a tiny remote-controlled model. The ad was good enough to give the car a 1,820% increase in searches on kbb.com, the biggest boost of any model on the site.

The ad, and one for the sporty NX crossover, also gave Lexus the biggest boost of any brand, according to Edmunds.com. Searches on its site went up 37% during the Super Bowl.

Another standout model was the Mercedes-AMG GT. The spot featured a tortoise on a hair-raising driving quest to beat his long time rival -- and steal his girlfriend in the process. The 60-second ad boosted search traffic on Edmunds.com by 2,189%.

Kia also had a strong showing. The South Korean automaker brought in Pierce Brosnan to subtly reprise his 007 role, this time with a romantic getaway the intended target rather than a deranged, power-hungry madman. The spot -- featuring Kia’s new Sorento crossover SUV -- gave Kia the biggest boost among automakers advertising during the Super Bowl, according to KBB.com, resulting in a 68% increase in searches.

"All the right elements come together in Kia’s Sorento ad," Brauer said. "Kudos to Kia for creating a James Bond theme without paying any royalty rights to MGM. Checks all the Super Bowl Car Commercial boxes."

Nissan also made a big play for attention with its touching "With Dad" spot that was noteworthy for debuting two previously unseen models. The company showed off its wild GT-R LM Nismo race car that it will run at this year’s 24 Hours of LeMans. It also showed the all-new Maxima full-size sedan for the first time, a model due on sale early this summer.

Despite sitting out this year’s Super Bowl, Volvo made a big push on the sidelines. The Swedish automaker -- which has a major relaunch of its XC90 crossover due later this year -- ran a philanthropic campaign on Twitter. The company asked Super Bowl viewers to tweet about a person who changed their life for the chance to win that person a Volvo.

The prospects of a free car were hard to resist, as Volvo reported it was the most tweeted hashtag of any automaker during the big game, with 45,000 mentions.