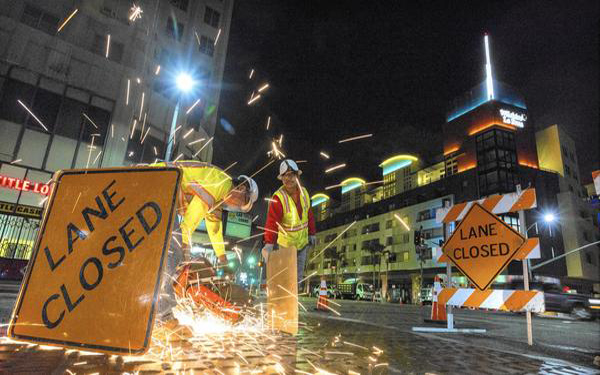 WASHINGTON — The budget proposal unveiled by President Barack Obama on Monday earmarks more than $1 billion for California transportation and construction projects, including $330 million that Los Angeles officials called crucial to extending the Purple Line from the Mid-City area to Century City.

Overall, Obama would spend more than $800 million on transit throughout the state — including $165 million to expand the Bay Area Rapid Transit system to San Jose and $150 million toward a light-rail project in San Diego — as he tries to make the case that infrastructure spending will propel a faster economic recovery.

The plan also would seed California with money for weapons systems, allot more than $600 million to build and renovate Veterans Affairs facilities and set aside more than $200 million to help the Jet Propulsion Laboratory send another rover to Mars.

Los Angeles Mayor Eric Garcetti said the city’s slate of transportation projects, including the Metro extension along Wilshire Boulevard, is now the nation’s largest public works program and a top priority of his administration.

“I am going to make sure we spend these dollars efficiently through tough oversight and sound management,” he said in a statement.

Despite the cheer in City Hall, the money is still far from committed.

Republicans who control Congress have criticized Obama’s spending plan as being excessive and too dependent on additional taxes. And in recent years, budget battles have left many federal spending programs with significant reductions by the time lawmakers struck deals with the White House.

The House has previously approved some funds for Los Angeles subway expansion. But the issue of transportation funds, in general, has split Republicans, with more ardent conservatives in the chamber opposing appropriations that more business-oriented members have backed.

One key player on the California transit funds will be House Majority Leader Kevin McCarthy of Bakersfield. Garcetti has lobbied his office on the issue, but McCarthy has left his options open.

Still, both parties have said they are eager to approve new money for transportation projects this year.

This is the first year that the Obama administration has included money for the Purple Line’s second phase and provides a good indication that the project will continue to get federal money through 2026, when it is set for completion, according to city officials.

All three of the projects depend on local funds — collected through a voter-approved sales tax increase — for a significant portion of the estimated $6.5 billion combined cost. But the federal money, which accounts for half the Purple Line’s cost and 44 percent of the regional connector’s cost, is crucial.

Members of Congress and local officials were poring through Obama’s budget document Monday to assess other local impacts, and some were already expressing concerns.

Rep. Adam B. Schiff, D-Calif., said the NASA budget was a mixed bag for the region. The budget more than doubled funds to send a rover to Mars by 2020, but eliminated or cut money for other missions with ties to JPL, including a second Mars rover that is already operating and a planned mission to explore Europa, one of Jupiter’s moons.

The new Mars rover program, which would receive $228 million next year, up from $100 million this year, would collect samples from the surface of the planet that could eventually be brought back to Earth to be studied for signs of microbial life, either past or present.

Rep. Brad Sherman, D-Calif., complained that Obama trimmed some of the money he had requested to expand the system for giving early warnings of earthquakes and that the president provided no support for widening and restoring the Los Angeles River.

The Pentagon’s $585 billion proposed budget, in the meantime, would provide work for many firms in Southern California’s aerospace industry. The proposal would increase weapons spending by 15 percent to $108 billion and boost research and development funds by 10 percent to $70 billion.

About $11 billion would go to buy 57 F-35 Joint Strike Fighter jets. The planes are assembled in Fort Worth, but many of their parts come from about 300 firms around California. In addition, the Air Force plans to spend $1.2 billion for a new long-range strike bomber, which is being developed by Lockheed Martin Corp. and Northrop Grumman Corp. in Palmdale, Calif.

The Pentagon has also set up a fight with Capitol Hill in asking for congressional support for base closures — a contentious issue because members of both parties staunchly protect military bases and defense contractors in their districts even as they force the Pentagon to cut costs.

The last round of base closures occurred 10 years ago, and Pentagon officials say that they once again have a surplus of military facilities.