Unlike others, ‘Suge’ Knight hasn’t been able to shake volatile past 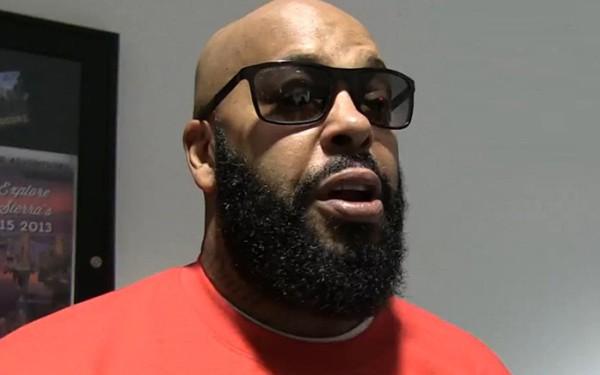 In the 2½ decades since Marion “Suge” Knight founded his volatile label Death Row Records, its artists and crew have moved beyond gangsta rap and onto more peaceful projects.

Andre “Dr. Dre” Young co-founded Beats Electronics, the headphone company and streaming service recently sold to Apple for $3 billion, and endowed an arts academy at USC. Ice Cube carved out a thriving film career, producing and starring in comedies such as “Friday,” the “Barbershop” series, “Ride Along” and family friendly fare such as “Are We There Yet?”

For Knight, however, the violent “thug life” that Death Row once soundtracked has continued to be close at hand, even as his musical impact has lessened. While the L.A. hip-hop world has largely left the overt, glamorized violence of the ‘90s far behind, the onetime hip-hop mogul appears drawn to it.

Last Thursday’s alleged hit-and-run in Compton, which left an associate of Knight’s dead and Knight arrested on suspicion of murder, is just the latest chapter in the former tycoon’s saga of misfortune and violence that has followed him for decades and more recently veered closer toward disaster. The incident occurred near the filming of a commercial for “Straight Outta Compton,” a biopic about N.W.A, a seminal group from the early days of the genre.

And while his travails have stacked up, a new kind of Compton hip-hop artist has emerged, one indebted to the accomplishments of Death Row but almost entirely divorced from its image (and real-life history) of violence. For today’s generation of L.A. hip-hop, who grew up after the ravages of violence depicted in ‘90s gangsta rap, the kind of tumultuous lifestyle embodied by Knight was something to flee.

Kendrick Lamar became a bestselling artist on the strength of his LP “good kid, m.A.A.d. city,” which documented his rough childhood from the perspective of a deeply observant outsider with a loving family. He even once told The Times, “You hear stories from the ‘80s about people selling dope and becoming millionaires, but in reality it’d just be guys walking around with $70 in their pockets. I knew I wanted something else.”

Aspirations of pushing a different kind of West Coast rap are the driving force of Lamar’s label Top Dawg Entertainment, founded by Anthony Tiffith in nearby Carson, which has actively rebutted the Death Row-era stereotypes of a South L.A. hip-hop collective.

In an April interview, before a performance on Jimmy Kimmel’s late-night TV show, South L.A. rapper Schoolboy Q said that for him and his peers music was a way out of that nihilistic lifestyle, not a means of glorifying it.

“TDE was an escape for me,” he said. “I was on my last legs with drugs and banging, and I hit rock bottom. But (the label’s founders) were street dudes who got away, and seeing that that changed my whole life around. It took time, but I became the dude who could smile and tell jokes again.”

Compton itself has dramatically changed its image too.

The city, once known for its violent, gang-ridden streets, hosts a gospel music festival to specifically counter the gangsta rap images that are still associated with the city. Compton’s charismatic mayor, 32-year-old Aja Brown, has worked to bring amenities like a farmers market and healthy new investments to the city.

Unlike director John Singleton’s 1991 feature “Boyz n the Hood,” a real-time howl of despair from South L.A. gang culture, the “Straight Outta Compton” biopic was a document of a bygone era, one that deeply informed L.A. music culture but is largely a piece of history.