New Year's Booklist: Find Your Genre Or Try Something New 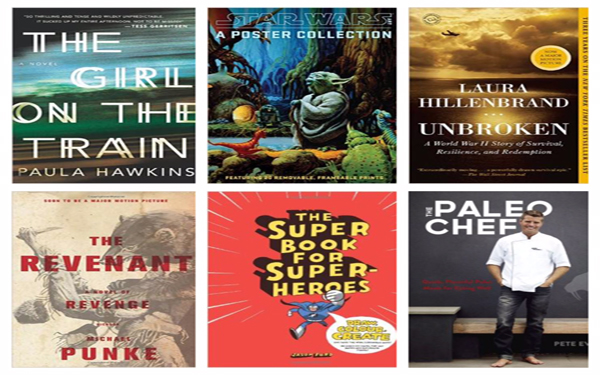 Is it possible you have made it to 2015 without having read the Harry Potter books? Rectify the situation immediately. J.K. Rowling’s handsomely packaged entire series promises to make your year memorable and your resolution to enjoy life more, simply attained. Read more here.

The timeless maxim, “Be careful what you wish,” must echo through Don Tillman’s mind as he lives his life out loud in both The Rosie Project and The Rosie Effect. Graeme Simsion’s novels share an intelligent humor with the great When Harry Met Sally… Read more here.

Jojo Moyes is one of those writers whose fame grows as she keeps her nose to the grindstone. Two delightful earlier works, Silver Bay and The Ship of Brides, will please any fan of One Plus One or Me Before You. All are nearly impossible to put down. Read more here and here

Adventures and friendship fuel this unabashedly romantic novel. Emma Hooper’s Etta and Otto and Russell and James is the book you tell your friends about over and over until they too submit to its charms. Read more here

Everyone knows YA is not just for teenagers anymore, right? Katie Coyle writes up a storm in Vivian Apple at the End of the World. This coming-of-age story mixes in the Rapture, a road trip and a romance, creating an incredibly readable cocktail. Read more here.

If your New Year’s resolution is to write your own comic – and who’s isn’t? – The Super Book for Super Heroes is the book for you. Jason Ford’s delightful creation teaches you to “draw, colour, create and save the world from bad guys!” Read more here.

When Leonardo DiCaprio decides on a project, you know it will be interesting. Michael Punke’s The Revenant, a tale of revenge and trappers in 1829, is that and more. Read the book before the late 2015 film release starring Leo, Tom Hardy and directed by Birdman’s Alejandro González Iñárritu. Read more here.

Before Unbroken was a film directed by Anjelina Jolie, it was a book written by Laura Hillenbrand. Read it and weep. Read more here.

Growing up in modern America may seem like a big topic but Shari Goldhagen tackles it gamely with In Some Other World, Maybe. Tracking four disparate people over two decades, the author reveals some poignant truths. Read more here.

Close to poetry, Jenny Offil’s Dept. of Speculation follows a woman’s life through seasons, emotions and marriage. The stream of consciousness style manages to encapsulate the inner brain in a way that feels new and daring. Read more here.

This is the third trip down memory lane for Alexandra Fuller and her storytelling is just as sharp as ever. Leaving Before the Rains Come focuses on the author’s divorce and attempt to get a handle on her life. Read more here.

Disney has perfected the art of animation (duh). Their latest venture gets illustrated to perfection in The Art of Big Hero 6. Read more here.

Always a treasure, the Best Food Writing series is packed with flavor, the 2014 edition being no exception. Holly Hughes curates a smorgasbord of essays on topics from Bangkok streetfood to pickled baloney. Read more here.

If your New Year’s resolution is to change your diet, Pete Evans’ The Paleo Chef is a good place to find inspiration. With recipes like hazelnut and banana pancakes, made with almond milk, coconut flour and coconut oil, you can enjoy tasty food with limited guilt. Read more here.

But if your New Year’s resolution is to cut out gluten, Flavor Flours, by Alice Medrich is the book for you. Medrich gives you sweets without detriment. Bursting with delicious recipes that use sorghum, teff, coconut flour and many more, you can have your buckwheat cake with rose apples and eat it too. Read more here.

With Star Wars: Episode VII coming to theaters this summer, it’s hard to imagine the fever for this series ever breaking. Celebrate the phenomenon with Star Wars Art: A Poster Collection. The 20, removable prints can be framed for daily consumption. Read more here.

Scandinavian crime fiction lives up to its grim reputation in Sara Bladel’s The Forgotten Girls. Suspenseful and creepy, this novel follows detective Louise Rick as she grapples with the dark side. Read more here.

Juicy and hard to put down, Paula Hawkins’ The Girl on the Train, brings to mind another little book called Gone Girl. Betrayal and obsession take center stage in this riveting read. Read more here.

Sophisticated and cool, Olen Steinhauer’s The Cairo Affair will make you want to slip off your Italian leather loafers and drink a scotch. Spies, espionage, affairs and intrigue make for an intoxicating cocktail, masterfully following in the footsteps of Ian Fleming’s James Bond. Read more here.

A reporter gets turned into a victim in Tami Hoag’s fine Cold Cold Heart. Surviving the attention of a serial killer, Dana Nolan finds that she can’t just “let it go.” Read more here.