In earning college degrees, gap between rich and poor has grown, study finds 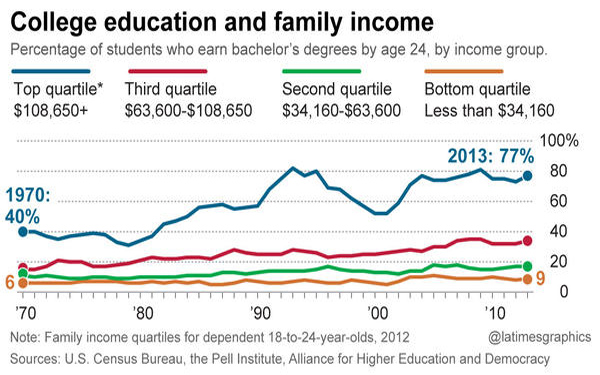 The education gap between rich and poor continues to grow, becoming a chasm of opportunity that often blocks the search for a better economic life, according to a report released Tuesday.

The study, titled “Indicators of Higher Education Equity in the United States,” was prepared by two groups that analyze college costs and degree attainment. The groups are the Alliance for Higher Education and Democracy, or AHEAD, at the University of Pennsylvania graduate school of education; and the Pell Institute for the Study of Opportunity in Higher Education, a research institute in Washington.

The study paints a bleak picture of how opportunities for higher education vary by economic status.

By comparison, college completion for students from the wealthiest families in the top quartile, those making at least $108,650 a year, increased from 40 percent to 77 percent during the same period.

Perhaps even more striking is that the education gap between rich and poor is growing, the researchers found.

“These data illustrate the profound gaps in equity for one important group: students from low-income families,” according to an accompanying analysis by Laura W. Perna, executive director of AHEAD. “Most of the data also describe an even more specific subgroup: students of traditional college-going age (18 to 24) who are financially dependent on their parents.”

Complicating the situation is that the way higher education is funded is changing. More and more, the cost is borne by families, with less help from different levels of government. Even as the amount of aid is falling, the cost of education has been rising dramatically.

College costs were more than two times higher in 2012 than in 1975, when the Pell grant program began. Pell grants, which provide federal aid to low-income students based on need, covered 67 percent of college costs in 1975 but only 27 percent in 2012, according to the report.

The president has proposed making two years of community college free, a move designed to give as many as 9 million students entry to the higher education system. During that period, the student could take courses that would allow transfer to a four-year institution.

The program, which would cost an estimated $60 billion over 10 years, was greeted coolly by the Republican-controlled Congress.