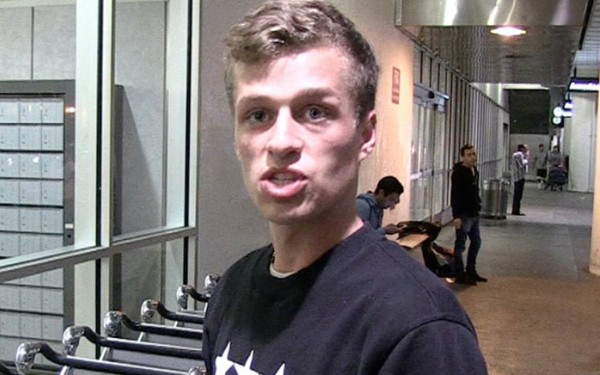 He allegedly threatened to fight with members of the flight crew and referred to people on the plane as “peasants.”

Paris Hilton's younger brother, Conrad Hilton, reportedly grabbed a flight attendant’s shirt and said: “I could get you all fired in five minutes. I know your boss. My father will pay this out, he has done it before. Dad paid $300,000 last time.”

Now Hilton is scheduled to be arraigned next month on charges related to his behavior aboard a British Airways flight from London to Los Angeles last year.

Hilton is accused of allegedly assaulting and intimidating flight attendants. He surrendered Tuesday morning to the FBI after he was charged with assaulting the flight crew to the point where it interfered with their ability to perform their duties, according to a U.S. District Court criminal complaint.

Technically, Hilton faces up to 20 years in federal prison if he’s convicted

Prosecutors said Hilton was a passenger on Flight 269 on July 31 and immediately began disrupting service.

He paced through the aisles, challenged requests to be seated by the flight crew and even threatened to kill one of them, the complaint says.

The crew believed he was under the influence of drugs because he was behaving in an erratic way and spoke quickly, saying “If you wanna square up to me bro, then bring it on and I will [expletive] fight you,” according to the complaint.

At another point, he said he would “own anyone” on the plane, whom he considered “peasants,” the complaint states.

Passengers appeared frightened and children were crying as Hilton carried on his tirade.

According to the criminal complaint, drink service was delayed by 40 minutes because of Hilton’s behavior.

The flight crew followed Hilton, but he was angry and argumentative, according to the criminal complaint.

Then, while he was sleeping, they restrained him.

According to the criminal complaint, he screamed obscenities and was monitored until police boarded the plane. He told crew members they were “going to ruin” his career, the complaint states.

In an interview with investigators, Hilton said he intimidated the flight crew members because he was defending himself.