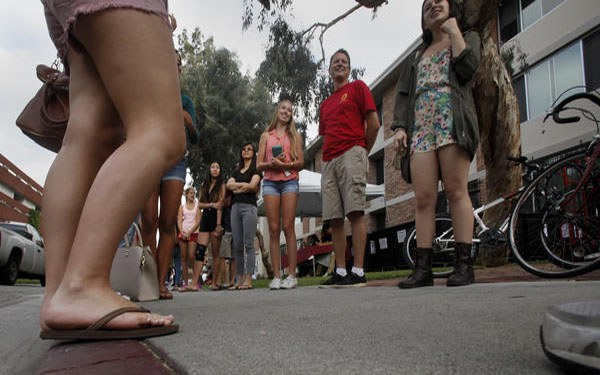 The current crop of college freshmen showed up at school as less experienced party animals than their older peers but with more mental health and emotional issues, according to a national survey by UCLA researchers.

At the same time, the new college students — who entered their teens when many of their parents grappled with the recession's economic fallout — are more concerned about financial success and aspire to attend graduate schools to enhance their career prospects, the annual American Freshman study found.

The survey suggests that the incoming freshmen "were buckling down prior to college and taking their academics more seriously," said Kevin Eagan, interim managing director of UCLA's Higher Education Research Institute, which has administered the poll for 49 years.

However, it remains unclear whether these students will prove on average to be a tame group, Eagan said. In fact, he said their relative abstinence during high school may mean they could be more tempted to binge drink and get into other trouble as social newbies away from the constraints of home.

That risk, along with reportedly higher levels of depression and other emotional problems, will challenge colleges to provide enough counseling support and substance abuse education, he said.

Nearly 11% of respondents said they spent six hours or more a week at parties during their senior year of high school, down from 23% a decade ago, the survey found. Additionally, 61% reported that they spent only an hour or less a week at parties, up from 39% 10 years ago.

Along the same lines, those who said they occasionally or frequently drank beer dropped to 33.5%, compared with 45.5% a decade before and 69% in 1984. Just 39% of current freshmen said they drank wine or hard liquor in the last year, compared with about 52% 10 years ago and 68% in 1987, when the poll addressed the issue.

Colleges around the country are struggling to meet higher demands for psychological and crisis counseling, heightened by fears that their campuses could face incidents of violence and suicide.

The survey, which was taken by 153,000 students mainly during last summer's orientations at 227 four-year colleges, bolstered those concerns. Nearly 12% of the freshmen rated their mental health as worse than most others their age; that compared with roughly 7% about a decade ago and 3.5% in 1985, when the question was first asked. In addition, 9.5% said they frequently felt depressed, up from the 6% low point, recorded in 2009.

"This is signaling that students are bringing with them some emotional struggles, some mental health issues" and those issues could make it harder for students to stay in school and earn a college degree, said Eagan, who is an assistant professor of education at UCLA.

Yet whatever problems the freshmen have, a lack of ambition is not one of them. A record 82% said that it was very important or essential that they become well-off financially, compared with nearly 77% in 2008 before the recession hit and almost double what it was 40 years ago during the countercultural era.

Similarly, the share of students entering college with plans to eventually earn a master's degree increased to about 44%, also a record and up from 28% four decades ago. Freshmen who indicated they wanted to earn a doctorate or professional degree also was at a new peak: nearly a third, compared with 21% four decades ago. Interest in medical school has increased in the last decade while the popularity of law school has dropped a bit.

Freshmen saw the economy crash in 2009 and many knew of college-educated people who lost jobs. As a result, they are entering early adulthood believing "they need more money to be comfortable and seeing that a bachelor's degree may not be the end of their educational journey," Eagan said. Plus, worries about college costs and student debt heighten desires for a good salary after graduation, he said.

College Central
Two sisters came home after their college campuses closed. Within days, both parents were in the ICU
796 views

College Central
Is it safe to travel to Mexico for spring break?
811 views