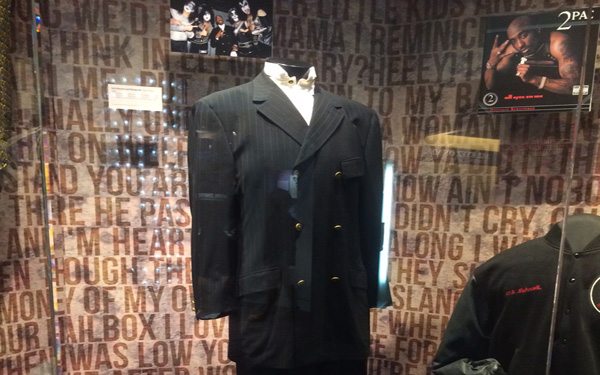 Tupac was a namby-pamby momma’s boy. Beneath the rapper’s public persona—the ladies’ man bravado, the gun-toting gang affiliation and the West Coast power lyrics—lived a sentimental, ballet-dancing poet who adored his mother. The newest installation at L.A. Live’s GRAMMY Museum, All Eyez on Me: The Writings of Tupac Shakur, examines the late lyricist’s softer side, with a dash of his Thug Life identity, too.

The most striking part of the exhibit is the collection of notebooks in which Tupac laboriously scribbled. His poetry called for peace, true love and social justice. One of Tupac’s most famous poems, The Rose that Grew From Concrete, is featured. It shows the indomitable spirit of impoverished, underprivileged minorities. The struggle to survive and succeed as a black male was an endless theme in Tupac’s legacy—an ambition instilled by his mother.

“Tupac’s writings are an honest reflection of his passions for, and about life,” said Tupac’s mother, Afeni Shakur, about the exhibit. “His timeless messages have instilled hope for those who have little, and for others, they serve as a catalyst for change. His words continue to motivate and inspire new generations. The world is a better place because of him.”

Along with writings, the exhibit features music videos, an iconic freestyle session with friend turned foe, Biggie Smalls, and assorted memorabilia. Who knew Tupac wanted to start a cookbook where rappers would share their favorite recipes? Or that he wanted to one day be a politician? Or that he had an affinity for Versace clothes? Ok, you could’ve likely guessed that last one. Silky and swaggered, Tupac’s Versace suit, which he wore at the 38th GRAMMY Awards, is on display.

Featured throughout the exhibit are interviews with Tupac throughout his life. One when he’s seventeen. One when he’s just been released from prison. In a particular interview, he says, “can’t nothin’ stop me but death itself.” But Pac was wrong. Even after death, his message of social justice, Thug Life and unabashed momma lovin’ lives on.

All Eyez on Me: The Writings of Tupac Shakur runs through April 22nd.