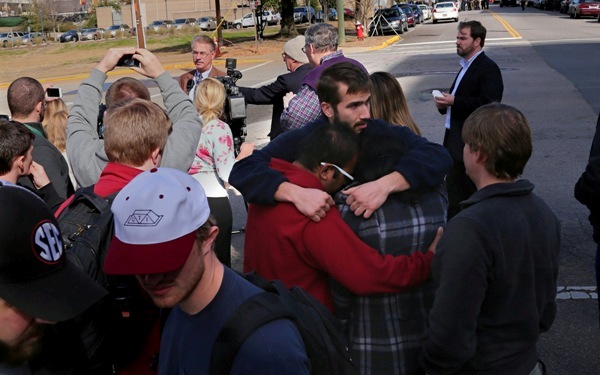 People react to news of a murder-suicide at the the University of South Carolina campus Feb. 5, 2015
(Credit: Tim Dominick/The State/TNS)

COLUMBIA, S.C. — A shooting incident on the University of South Carolina’s Columbia campus is being investigated as a murder-suicide.

University of South Carolina police and others responded to the shooting at the Public Health Research Center on campus about 1 p.m. University spokesman Wes Hickman subsequently said the building had been secured and an all clear issued.

According to the university’s Darla Moore School of Business, university police were saying not to release students from that nearby building, even though the threat had passed.

An investigation is being conducted by the State Law Enforcement Division, which takes the lead in all shootings on South Carolina college campuses.

Thom Berry of SLED said the agency was investigating a murder-suicide in the public health building.

“There was no active shooter other than the two deceased,” Berry said.

No names were released, and Berry wouldn’t say if the two killed included students, faculty or others related to the university.

A schoolwide alert went out at 1:16 p.m. in a text message to all 25,000-plus university students and faculty saying, “SHORS FIRED AT NEW SCHOOL OF PUBLIC HEALTH. Seek safe shelter.” The typo was included in the message.

Afterward, the university said all public health classes and any classes in the Public Health Research Center (New School of Public Health) had been canceled for the remainder of the day.

There was an unconfirmed report from an employee at the school, who declined to give her name, that the shooting happened on the fourth floor of the building.

As the alert was issued, people were asked to seek a safe shelter. All university buildings also were put on lockdown, and police set up a perimeter, blocking off several streets.

Immediately after the alert, Cameron Razzaghi, 22, a Univerity of South Carolina student in a bank parking lot across from the school, said he was worried some friends might still be in the school.

Razzaghi said he was on the Virginia Tech campus at the time of the 2007 shootings there, while growing up in Blacksburg.

“I’m worried,” Razzaghi said. “I’ve been through this before.”

The manager of Subway on Assembly Street said police ordered the shop and gas station to lock its doors about 1:30 p.m. Six employees were inside.

“The road is blocked,” said the woman, who declined to give her name. “Nobody in and nobody out.”

Gov. Nikki Haley cut short a news conference for security concerns Thursday. Some state government workers, who work close to campus at the Capitol Complex, also were notified by security officers of the shooting.

Officers in SWAT gear, armed with AR-15s, moved students across Assembly Street from the school of public health.

Columbia Police Chief Skip Holbrook was on the scene as well as the Columbia Fire Department.