At 26, alt-R&B star Jhene Aiko’s rise is happening more than a decade into her music career 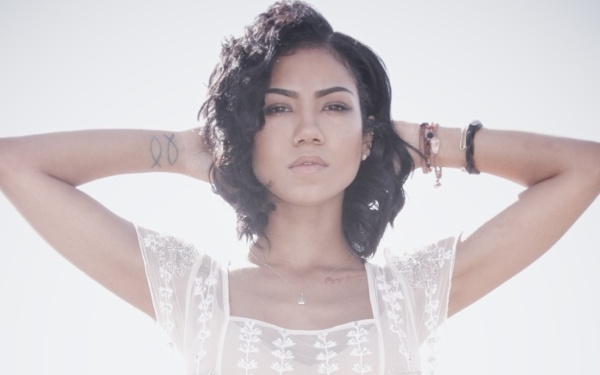 Jhene Aiko, her agent and manager were huddled together on a recent afternoon going over upcoming tour logistics for the buzzing alternative-R&B star.

The Los Angeles native is in the middle of a victory lap for a breakout year that included her first hit single, a well-received debut album and three Grammy nominations, including one for urban contemporary album for her debut EP, 2013’s “Sail Out.”

“I’m taking it a day at a time. There’s been so much going on and the ball is still rolling with the album, I haven’t been focused on if I’m going to win or not,” Aiko said. “For me it’s all about keeping the ball rolling.”

Although she’s only 26, Aiko’s rise is happening more than a decade into her music career.

Jhene Aiko Efuru Chilombo grew up surrounded by music. Her dad converted part of the family home into a studio and writes his own music, and her sister (emerging R&B artist Mila J) was a member in the ‘90s R&B group Gyrl along with another one of Aiko’s older sisters. By the time Jhene was 13, she had a deal with Epic Records.

Marketed as the spunky cousin of a member of short-lived boy band B2K (her labelmates), Aiko’s sassy pop-R&B tracks were packaged with the group and she often toured with them. But the release of her debut album was plagued by label troubles, and she asked to be released. After finishing high school, Aiko had a daughter and began working with producers from back in her teen days while moonlighting as a waitress.

In 2010 she began collaborating with the L.A. hip-hop label Top Dawg Entertainment, appearing on early mixtapes from Kendrick Lamar, Schoolboy Q and Ab-Soul. Aiko’s 2011 mixtape, “Sailing Soul(s),” led to a deal with hip-hop producer No I.D., who had worked with Kanye West, Nas and Common.

The self-released project, which also featured collaborations with West, Drake and Miguel, arrived at the time when the sounds of R&B had evolved past conventional boundaries.

As Miguel, Frank Ocean and the Weeknd were helping define a growing movement of forward-looking R&B, Aiko began to build a cult following as one of the few females who were part of the conversation. (In 2013, the Grammys established the urban contemporary album category in wake of this musical shift.)

Being able to float between R&B and rap allowed her to become a hip-hop “it girl,” offering sultry hooks on singles from J. Cole, Wale, Big Sean, Drake and Common (their collaboration, “Black Majik,” was nominated for a rap Grammy), which added to her growing buzz.

“Knowing that more people are listening, I only want to be progressive. I only want to grow,” she said. “The extra attention validates my reason to want to do more with the music. I want to be consistent and remain myself — being myself got me nominated, so I guess I’m going to stick with that.”

While her peers make club hits, Aiko looks inward. She sings about heartbreak, loss and loneliness but also spiritual and existential experiences. She wears her philosophies on her skin, with tattoos of a Japanese rising sun, a sprawling lotus blossom and “Why Aren’t You Smiling?,” the last words her brother Miyagi tweeted before he died of cancer in 2012 (it inspired a track on her LP).

Her EP was a Top 10 debut on the Billboard 200 and featured Aiko’s first big hit, “The Worst,” which became a mainstay on urban radio (and a nominee for R&B song). “Sail Out” preceded her years-in-the-making full-length debut, “Souled Out,” which premiered at No. 3 when it was released in September. And Aiko is already at work on more music.

“All those songs I had been working on for so long, it’s old to me now,” Aiko said. “I’m in a different place now with my writing and my singing. Everything has progressed, and that’s what I always want to do. Everything should trump the last thing.”

Later, Aiko retreats to a studio room. Her engineer plays a portion of a track she may lend a vocal to for a remix. She pulls out a pad of paper and begins humming a melody and writing lyrics.

“Even though I’ve been doing this since I was 13, I feel like this is the first time that I’m in it and 100 percent focused,” she admits. “It’s all working for me, so I need to work for it.”