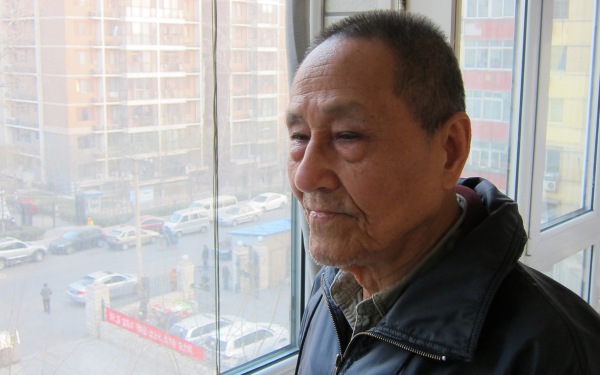 Bao Tong has been under house arrest since getting out of prison in 1997.
(Credit: Stuart Leavenworth/McClatchy DC/TNS)

BEIJING — He spends his days under house arrest in a grungy west Beijing apartment block. Government minders track his every move and communication.

At age 82, Bao Tong has every right to be bitter. He once was a top dog in China’s Communist Party, but for a quarter-century, his former comrades have kept him on a leash.

Yet even when he recalls the seven years he spent in prison — mostly in solitary confinement — Bao shows few signs of anger. He exudes the air of a man who feels unshackled, even with the partial loss of his personal freedoms.

“Sitting in a prison and being deprived of being a party member and Central Committee member was a liberation to both my voice and my brain,” Bao said during a recent interview in his apartment. “Being alone in a room with no distractions enabled me to quietly and thoroughly contemplate many issues. I was very happy.”

Beijing is home to many ghosts of the 1989 Tiananmen Square crackdown. Bao is one of them, although still very much alive. No longer behind bars but hardly free, he and his family will never escape an event that China wants others to forget, the government’s crushing of pro-democracy protests more than 25 years ago.

In early 1989, Bao Tong was the ultimate Beijing insider, serving as policy secretary to Zhao Ziyang, general secretary of the Communist Party. Zhao and Bao wanted the party to go easy on the Tiananmen protesters, but Deng Xiaoping, the nation’s de facto ruler, disagreed. Deng purged the two and the government ordered troops to clear Tiananmen Square. Beijing then orchestrated a show trial for Bao, accusing him of alerting protesters to the government’s plan to implement martial law. Bao spent seven years behind bars, mostly in Beijing’s notorious Qincheng prison, until his release in 1996.

Since then, Chinese authorities have largely confined Bao to his house, making sure he leaves Beijing during “sensitive periods,” such as last year’s 25th anniversary of the June 4 Tiananmen Square crackdown.

Yet Bao and his family haven’t been completely stifled. Bao Tong writes regular commentaries for Radio Free Asia, a U.S.-funded news operation, that are stridently critical of the party’s policies. His son, Bao Pu, runs a Hong Kong publishing house that specializes in books banned on the mainland, such as memoirs of former party leaders and exposes of the party’s misdeeds. It puts him at risk of arrest when he travels to the mainland to visit his family, perhaps once or twice a year.

“With anything in life there is a risk,” the younger Bao said during an interview at a Hong Kong cafe. “Am I the guy they are going to put in jail for 10 years? That is the risk I have to take.”

“There is no doubt they are very close, even if they can’t see each other regularly,” said Louisa Lim, a former NPR reporter and visiting professor of journalism at the University of Michigan who profiled the Bao family in her 2014 book, “The People’s Republic of Amnesia: Tiananmen Revisited.” “There is a very strong bond between them, in part because of everything they have gone through.”

Born in the coastal province of Zhejiang, Bao Tong grew up in Shanghai and joined the Communist Party in 1949, at age 16. He joined just weeks before the party wrested control of Shanghai from Chiang Kai-shek’s nationalist government. Over the next several decades, he rose steadily through the party, with a few bumps along the way.

In 1970, during Chairman Mao Zedong’s Cultural Revolution, Bao Tong and his wife, Jiang Zongcao, were labeled “capital roaders.” Maoists split the couple apart and forced them to live in “re-education” villages in Henan and Jiangxi provinces. Bao Pu lived with his grandparents and would occasionally see his father, who’d been ordered to work on a Henan tobacco farm.

Before the Cultural Revolution, Bao Tong’s immediate superior had been Deng Xiaoping, who himself had been purged and rehabilitated several times. After Mao died in 1976, Deng ascended to China’s top leadership position, and Bao rose too, especially after Zhao Ziyang became premier in 1980. By 1987, Bao was Zhao’s right-hand man and the head of the Central Committee’s influential Office of Political Reform.

When students started demonstrating in Tiananmen Square in April 1989, Bao sensed it wouldn’t end well, either for them or him. The Communist Party was split between hard-line factions and moderates more open to political reform, such as Zhao and Bao. The two men resisted calls to impose martial law against the student demonstrators, and so they were purged for it. On May 28, less than a week before the crackdown, Bao was taken away in a black car.

As it happened, one of those Tiananmen protesters was a 22-year-old college senior, Bao Pu, who ignored his father’s urgings to stay away. To this day, Bao Pu regrets that, as an idealistic young student, he didn’t foresee the violence the government would unleash. It’s one reason that, at the start of last year’s pro-democracy demonstrations in Hong Kong, he and his father urged student protesters to be wary.

Bao Pu’s decision to move to Hong Kong and start a dissident publishing house apparently had little to do with his father. Asked about it, Bao Tong said: “There is an old tradition in China of the older generation controlling the younger generation, but in my family that is not the case.”

According to Bao Pu, it was a decision born of restlessness.

After his father was taken away to prison, Bao Pu moved to the United States and studied computer engineering and public administration at Princeton University. He started working for a consulting company in New York, but it left him feeling empty. “I was living a life that had nothing to do with China,” he said.

After moving to Hong Kong, Bao said, he was surprised that no one was publishing insider accounts of the power struggles on the mainland. So in 2005, he and his wife, Renee Chiang, founded New Century Press, specializing in books that couldn’t be published in China.

Over the last decade, New Century Press has published dozens of titles and earned international awards and accolades. Its breakout book was the journal of Zhao Ziyang, based on tapes the former leader secretly recorded during his house arrest following Tiananmen. That book and others have shed light on the events and players involved with the unleashing of military force on June 4, 1989.

Such books are forbidden in China, but mainland Chinese tourists bring them back from Hong Kong nearly every day. They’re prominently displayed in bookshops in Hong Kong’s airport. Next to one of Hong Kong’s biggest shopping centers, in Causeway Bay, the People’s Coffee & Books specializes in banned books, including those by New Century.

“You wouldn’t believe it, but we have (Chinese) government officials coming in here to buy them,” said Paul Tang, the bookstore’s owner. “They come over with their assistants and just start grabbing books off the shelf.”

On several occasions, Chinese authorities have tried to stop Bao Pu from publishing a book, but only once has he bowed to the pressure: in 2010, when New Century wanted to publish what appeared to be the secret diary of Li Peng, who was China’s premier during the Tiananmen crackdown. Authorities made clear to Bao Tong and Bao Pu that there would be consequences if the book were published. Days before it was to go to press, Bao Pu complied.

By then, he said, the diary had been leaked over the Internet, providing tantalizing details about Tiananmen, including Deng Xiaoping’s role in the military assault.

“By retreating, I got something in return,” said Bao Pu. “The authorities, through their reaction, authenticated that the diary was real.”

Bao Tong also must weigh his actions against the possible repercussions to his family.

Ten years ago, he and his wife attempted to leave their Beijing apartment to pay their respects to the family of Zhao Ziyang, who had just died. Plainclothes security agents stopped them, and one pushed Jiang Zongcao to the ground. That fall fractured a bone in her spine, and she had to be hospitalized for three months.

Last month, on the 10th anniversary of Zhao’s death, Bao made no attempt to leave his apartment to join an organized memorial. But he did pen a commentary for Radio Free Asia urging authorities to let Zhao’s supporters assemble without harassment. The decision to commemorate someone is a matter for the individual, he wrote, “and shouldn’t be interfered with by the leadership or the ruling party.”

Thin, with dark circles under his eyes, Bao has lost some vigor in recent years, but he retains a sharp memory. It’s a trait that made him a valued Communist Party member. He was a walking encyclopedia, able to remember biographical details about thousands of party comrades.

These days, his life is tightly controlled. Authorities monitor his phone calls and block some they don’t approve of. Visitation is limited. Those visitors who are permitted must show identification to a clerk sitting behind a desk in the cold, scruffy lobby of his apartment tower.

Last May, as the 25th anniversary of the Tiananmen Square crackdown approached, Bao said he knew it would be best if he left Beijing. He booked a trip to his hometown in Zhejiang province, and authorities were apparently happy to see him go.

Bao is known for being more optimistic than his son, but at the end of a long interview, he didn’t sound very upbeat.

“You ask me if I see the possibility of a more open society,” he said. “I do not see any signs. All I have is hope.”