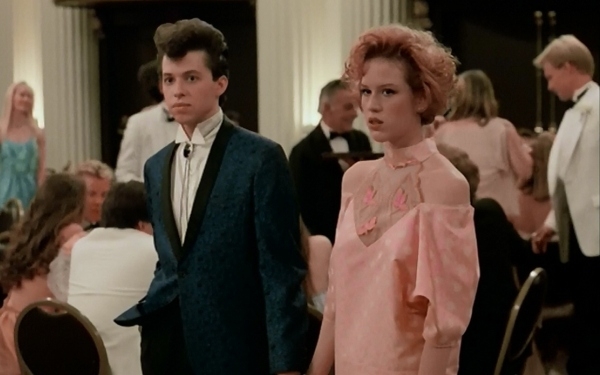 Should Jon Cryer's and Molly Rindwald's characters have ended up together in Pretty in Pink?

Valentine’s Day is not far off, and for many of you, the plans will include cuddling up to watch a romantic movie or TV show. Only sometimes you may get to the end of the feature and ask yourself why anyone thought the concluding couple onscreen was such a perfect match.

These are not the tales that toy with the audience for 90 minutes, setting up a mismatch before settling on the right pairing at the end. These are the ones where, as the credits roll, love has still gone wrong.

“Pretty in Pink,” where Andie (Molly Ringwald) and Blane (Andrew McCarthy) end the movie together — even though Blane is bland and the man who most understands Andie is Duckie (Jon Cryer).

“How I Met Your Mother,” which was so determined to end with togetherness for Ted (Josh Radnor) and Robin (Cobie Smulders) that it killed off the mother (Cristin Milioti) after the show had spent years setting the stage for her.

“Manhattan,” where Woody Allen’s character ends with one last, romantic pursuit of Mariel Hemingway — when we’ve already seen that Diane Keaton is a better and more age-appropriate fit.

OK, so we know why that last one happened — that Allen was telegraphing the very personal desire that would later complicate his reputation.

But there are other reasons for love going wrong. Some is sheer stubbornness; the ending of “How I Met Your Mother” had been planned early in the show’s run, and the producers refused to abandon it even when ensuing episodes made it less and less reasonable.

Some decisions are also tied up in Hollywood assumptions about what audiences want.

“Dawson’s Creek” seemed from the beginning to be about getting Dawson (James Van Der Beek) and Joey (Katie Holmes) together. But the series ended with Joey and Pacey (Joshua Jackson). Series creator Kevin Williamson once said that he was “absolutely convinced” the series had to end with Dawson and Joey, that “Dawson and Joey are soul mates. And then I kept thinking, one thing I’ve learned in my life is that my soul mate isn’t necessarily my romantic love.” So he opted for romance, and that meant Pacey.

To him, anyway. The Pacey vs. Dawson debate goes on.

Then there is the idea that the pretty people end up together. When I raised this issue on Facebook, one commenter lamented about the end of “Say Anything,” where Lloyd (John Cusack) gets the pretty woman (Ione Skye) even though Corey (Lili Taylor) is a much better fit. In “Reality Bites,” Lelaina (Winona Ryder) takes Troy (Ethan Hawke) even though Michael (Ben Stiller) clearly understands her needs — so much so that he’s willing to tell her things she does not want to hear. But Hawke was the better looking.

Several fans of “The Philadelphia Story” complained that Tracy (Katharine Hepburn) winds up with Dexter (Cary Grant) instead of Mike (James Stewart). One scene between Stewart and Hepburn still gets motors running in some audiences. Yet, as likable as Stewart was, Grant was more conventionally handsome.

By the way, in “High Society,” “Philadelphia Story’s” musical remake, Tracy (now Grace Kelly) opts for Bing Crosby over Frank Sinatra. But Sinatra ends up with Celeste Holm — which, to be honest, is a much better deal.

While Holm embodied smarts and style in movies, “High Society” was not the only time she finished behind a pretty face. I will never understand why Gregory Peck ended up not with Holm but with Dorothy McGuire in “Gentleman’s Agreement” — except, of course, that McGuire was the more Hollywood choice.

“Pretty in Pink” remains a much-cited example of wrong-choice romance because the original plan for the movie was that Duckie and Andie bond at the end.

Test audiences seeing the movie hated that development. It did not matter that Blane was so unworthy of Andie. He was the rich, good-looking guy whose winning by poor-kid Andie made her a modern-day Cinderella. The target audience wanted, needed that coupling. It was not until “Some Kind of Wonderful” a year later that writer John Hughes offered a vision close to what he had sought in “Pretty in Pink.”

Ringwald, by the way, also told Entertainment Weekly that she thought Blane and Andie would not stay together, which just adds to our argument about wrong couples in Hollywood endings. Only Ringwald did not think that opened the door to Duckie, since she has said in several interviews that she thought Duckie was gay.

Although Cryer has disputed that idea, it does point to another way that seemingly perfect couples are kept apart: when one of them is gay.

It is more than possible to look at the many seasons of “Will & Grace” and think that the only logical match would be Will (Eric McCormack) and, well, Grace (Debra Messing).

Similar is the conflict in “My Best Friend’s Wedding.” Julia Roberts resumes an old pursuit of Dermot Mulroney, who is engaged to Cameron Diaz — and does so with the help of her gay pal, Rupert Everett. One Facebook commenter thought Mulroney should have opted for Roberts, who “Casablanca”-like gives him up to Diaz. (I know, Bogart and Bergman are the true couple in “Casablanca,” but the Allies might have lost the war if Bergman abandoned Paul Henreid.)

In 2012, critic Erin Strecker wrote, “the gay sidekick ... now essentially comes standard in most teen romantic comedies.” And that’s a handy device for having characters who care for and understand each other, while sending romance in another direction.

But what if the audience comes to a project with a sense of what should happen? What if, as was the case in “Circle of Friends,” there’s a preceding book in which, as one fan puts it, the main character kicks her heel of a fella to the curb — and the movie puts them together?

In that case, the book argued that the woman was better off alone. And in many screen cases, solitude may be the best thing for the lovelorn — if the alternative is a poorly chosen mate.