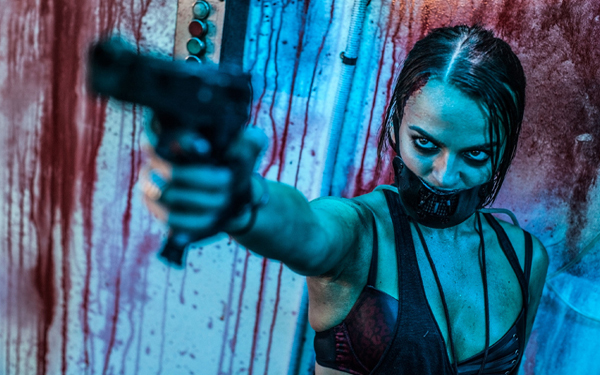 If there’s anything the late Steve Irwin taught us it’s that Australia is home to some of the most menacing predators the earth has to offer. From the giant crocodiles to the itsy-bitsy spiders, the threat of death hangs ominously in the air amongst the beauty of the country’s equally lush and desolate landscape. Just when we thought it couldn’t get any creepy crawler-y, Wrymwood is here to prove otherwise. There’s a creature so bloodthirsty and merciless that even the crocs don’t stand a channce. So grab your hunting rifles and be on guard because the zombies have invaded the Outback.

While many zombie narratives trudge through the usual slew of rules and tropes that the genre so relies on, writer/director Kiah Roache-Turner decided to depart from what we know, instead exploring uncharted territories of flesh-tearing glory. Not taking itself too seriously, nor being wholly satirical, Wyrmwood has its own bag of tricks.

It begins like most zombie films do, with a sudden outbreak of the undead disease that, at first, seems to come out of thin air. So when Barry (Jay Gallagher) gathers his wife and daughter with gas masks on and pistols in tow, he figures as long as they can avoid getting bitten, they’ll be safe. He is, of course, dead wrong. This virus has lived stagnant in humans with certain blood types and some celestial, perhaps even godly event, has triggered it. Anyone can have the zombie gene, healthy or otherwise. Unfortunately for Barry, his wife and daughter were winners of that unlucky lottery, and you can imagine how he has to solve that problem.

Now he only has one family member to turn to--his sister Brooke (Bianca Bradey). She lives in another town, and while she may have escaped the horror of the zombies, she falls victim to perhaps an even greater evil: man. Captured by mysterious military men, Brooke finds herself a part of a human-zombie experiment that includes sustaining a whole lot of torture from a mad scientist. To his chagrin, however, the mad scientist's experiments have no effect on Brooke because little does he, or Brooke for that matter, know, she is special.

As Barry makes the long and bloody journey to Brooke, he teams up with a group of misfit guys who together discover that zombie blood is flammable and can be used as fuel. Now the zombies have value beyond target practice. Meanwhile, Brooke is literally tapping into the minds of zombies as she begins to wield an admittedly kicka** superpower that makes her a force to be reckoned with. It's honestly surprising that this power hasn't come up in the myriad zombie movies. I refuse to spoil it, but believe me, it’s awesome. And it cultivates Brooke into a strong female role.

Kiah and his brother Tristan Roache-Turner team up on the screenplay, which shows Barry and Brooke’s separate but simultaneous battle against both zombies and humans. This structure allows the first-time filmmakers to create a richer backstory and narrative concerning the zombie outbreak, which is a major downfall for many zombie flicks that easily dismiss the cause and effects.

What we are left with is an unabashedly fun and gory display of the zombie apocalypse in the Outback. With enough dry humor to keep our wits sharp, as well as nods to grindhouse imagery and camerawork to satisfy the horror element, Wyrmwood becomes its own entity in the seemingly never-ending pool of zombie pop culture. While the momentum does slow in the third act, the Roache-Turner brothers have dug through the stale rules that often hold the zombie genre back, discovering new ways to immerse viewers into a brave new world of undead madness.

Wyrmwood will be released in theaters on Friday, February 13th.