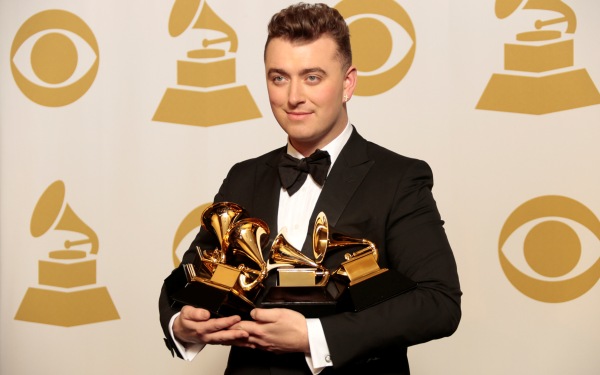 LOS ANGELES — The 57th Grammy Awards on Sunday became the night of Sam Smith, the freshman British singer-songwriter who took three of the four top awards, for record, song and new artist.

The runaway success of Smith’s career in the span of barely eight months dramatically demonstrated the new world in which music is created, given birth and blossoms at lightning speed thanks to Twitter, Facebook, Instagram, YouTube and other creations of the Internet age.

“Stay With Me,” Smith’s breakthrough hit, was named record and song of the year, a deeply heartfelt plea to a departing lover.

“Thank you so much for breaking my heart,” Smith, 22, said when he stepped to the stage to collect the record of the year award. “You got me four Grammys. … Dear Lord, thank you so much, this is the best night of my life.”

What turned into a huge night for the artist came eight months after the release of his debut album, “In the Lonely Hour,” which also took the pop vocal album award.

Less than a year ago, Smith was virtually unknown outside his native England, but thanks to the near-instantaneous speed of word-of-mouth through the blogosphere, the album has sold nearly 2 million albums in the U.S. and more than 5 million worldwide, allowing Smith to headline Madison Square Garden in New York in January and fill two nights at the 18,000-capacity Forum in Inglewood, Calif., just last week.

“Albums — remember those?” awards presenter Prince said before revealing Beck’s name as the winner, then injecting a pithy bit of social commentary when he added, “Like books, and black lives, albums still matter.”

Beck’s album sold nowhere near the numbers of the Beyonce, Smith and Pharrell albums, but some industry observers thought he could slip through to win if the pop-R&B vote was split between Beyonce and Williams and the youthful indie singer-songwriter-minded academy members divided their votes between Smith and Sheeran. Earlier in the evening Beck also collected the rock album Grammy over works from Ryan Adams, the Black Keys, Tom Petty & the Hearbreakers and U2.

Picking up that award, the 45-year-old musician said: “I’d like to thank all the musicians who played on this record — they made it a family affair. I’ve played with most of them for 20 years.”

After winning the pop vocal album award, Smith said, “I just want to say, that before this album, I tried everything to try to get my music heard. I tried losing weight and I was making terrible music. It wasn’t until I started being myself that people started to listen.”

Smith became one of the record industry’s big success stories of 2014 with his breakthrough hit single “Stay With Me” from “In the Lonely Hour.” For his performance late in the show of “Stay With Me,” Smith was accompanied by singer Mary J. Blige and a string orchestra.

Williams transformed “Happy,” his omnipresent feel-good hit of 2014, into an ominous slice of social commentary during one of the most powerful musical performances of the ceremony, using his moment onstage to allude to racially tinged clashes during the year by outfitting dancers in dark hoodie sweatshirts who raised their hands as if surrendering before the number shifted into its signature mood of celebration.

Williams was outfitted as a bellhop and gave a stern spoken introduction to a haunting minor-key orchestral accompaniment written by film composer Hans Zimmer, who joined Williams on stage adding his electric guitar to the cross-genre number that also featured Chinese classical pianist Lang Lang, a gospel choir, yellow-robed members of a string orchestra and a raft of multi-ethnic dancers and singers.

It segued into a public service announcement from President Barack Obama promoting the “It’s On Us” campaign to combat domestic violence, followed by another message from domestic abuse survivor Brooke Axtell that injected another topic that’s been in the news during the last year into the show.

Recording Academy President Neil Portnow addressed the flip side of how changing technology has impacted many musicians, who find it considerably harder to earn livings at their craft in an age when music is circulated on the Internet for free. He made a bid for legislation that assures that “artists are compensated fairly for their work.”

The omnipresent singer-songwriter-producer said he was unprepared to win and consequently kept his acceptance speech comparatively short. The original version of “Happy,” introduced in the 2013 film “Despicable Me 2,” was released before the eligibility period for this year’s Grammy ceremony, but Williams slipped in with a subsequent live rendition.

His name was announced by Taylor Swift, who noted before revealing the results in the category that “I have a lot of friends in this category … and as a former loser of this award in 2008, I just want to say that if you don’t win, you’ll be OK.” Swift’s latest album, “1989,” was the top-selling album of 2014.

Shortly before Williams took the stage, Miranda Lambert was awarded the country album trophy for her fifth album, “Platinum.” “I love every album in this category,” Lambert said on taking the stage. “I’m so thankful. … I poured my heart and soul into this.”

A saucy ode to the physical and emotional pleasures of marital bliss — but mostly physical — Beyonce’s duet with husband Jay-Z, “Drunk In Love,” took the honor for R&B performance.

“Wow, thank you guys so much,” Beyonce said, looking out on the crowd at Staples Center in Los Angeles that included her husband. “I’d like to thank God and … thank you to my Beyhive, thank you, guys, for working so hard,” a reference to the nickname of her fan base.

Despite a recent minor controversy about musical similarities between the song Smith wrote with James Napier and William Phillips to Tom Petty’s 1989 hit “I Won’t Back Down” that resulted in partial songwriting credit being given to Petty and co-writer Jeff Lynne, there was little evidence of anything but unbridled enthusiasm for Smith and the song from the academy and the Staples audience.

AC/DC opened the telecast with a fire-breathing new number that segued into the Australian group’s signature 1979 song “Highway to Hell” that brought the Staples audience to its feet out of the gate.

Before the show began, Recording Academy voters headed off a potential firestorm of criticism ahead of the telecast by awarding the rap album Grammy to Eminem for “The Marshall Mathers LP 2” over Iggy Azalea’s “The New Classic,” although it still placed the award with a white rapper rather than African-American rap nominees Common, Schoolboy Q or Childish Gambino.

It was one of 73 awards announced before the telecast.

Azalea’s album and hit single “Fancy” (with rapper Charli XCX) were massively popular in 2014 but sparked much debate over cultural appropriation because Azalea is white and from Australia, a country not known as a cauldron for urban hip-hop.

Eminem’s album wasn’t widely regarded as being as consistent as some of his earlier collections, but it garnered dramatically stronger reviews than Azalea’s album.

Azalea also missed out on another Grammy opportunity when “Fancy” lost to A Great Big World with Christina Aguilera’s hit “Say Something” in the pop duo or group performance category.

Beyonce, Smith and Williams led nominations with six apiece, while 11 other artists and engineers each wound up with four when the nominations were announced in December.

Among the highlights of the pre-telecast awards, 88-year-old pop crooner Tony Bennett shared an award with 28-year-old pop performance artists Lady Gaga for their collaborative album “Cheek to Cheek,” named the best traditional pop vocal album over works by Annie Lennox, Barry Manilow, Johnny Mathis and Barbra Streisand. They also sang the title track during their segment on the show.

It was one of several cross-generational collaborations that have become one of the Grammy show’s signature elements, including veteran Welsh pop singer Tom Jones teamed with English pop star Jessie J on the Righteous Brothers’ 1964 hit “You’ve Lost That Lovin’ Feelin’ ” as a salute to Brill Building songwriters Barry Mann and Cynthia Weil, recipients of one of this year’s Trustees Awards. Other veterean-newcomer teamings brought 24-year-old Irish singer Hozier together with 60-year-old Eurythmics singer Annie Lennox, and rapper Kanye West and pop-R&B princess Rihanna with 72-year-old Beatle Paul McCarntey.

In the combined male-female country vocal performance category, Carrie Underwood bested Eric Church, Hunter Hayes, Miranda Lambert and Keith Urban for her recording of “Something In the Water.”

An emotional favorite going into Sunday’s awards, veteran country singer-guitarist Glen Campbell generated up two Grammys related to his journey into Alzheimer’s disease. “I’m Not Gonna Miss You,” the closing-credit song he wrote and recorded with Julian Raymond for James Keach’s documentary film “Glen Campbell … I’ll Be Me,” was named best country song, and the Band Perry’s performance for the film of his 1967 hit “Gentle On My Mind” collected country duo or group performance award.

“The Grammys were the matchmaker,” said singer Kimberly Perry, noting that she and her sibling bandmates met Campbell at the 2012 Grammys, where they also performed a portion of “Gentle on My Mind.” Given “what his family is going through, this is truly an honor. … “He’s the quintessential entertainer,” she said. “He recorded on some of the greatest albums as a guitarist,” she said of his career as a top session guitarist in Los Angeles before his solo career ignited in the mid-1960s. “Even in the latter days of his life, his heart for music is as prevalent as ever.”

For many of the performers, especially the freshman nominees, it was a chance to interact with some of their heroes.

“Today I was in my (dressing) room and Stevie Wonder is next to me in his changing room and asked me to come into his room,” Sam Smith said before the ceremony began. “I walked in and he started playing my song to me, ‘Not the Only One’. He started singing it to me. I just freaked out. I got on my phone and filmed a little bit. What do you do, it’s just incredible. “

Elsewhere over Grammy weekend, Bob Dylan surprised and delighted roughly 3,000 industry movers and shakers on hand at Friday’s MusicCares Person of the Year big money benefit tribute to the singer-songwriter, with an uncharacteristically long, colorful acceptance speech in which he touched on myriad topics. Record academy president called it “the $7 million bash” in reference to the amount of revenue it generated for the academy’s MusiCares wing that provides assistance to musicians in need.

Then Saturday, at music mogul Clive Davis’ annual pre-Grammy celebration at the Beverly Hilton Hotel, big-name musicians entertained one another and the rest of the capacity crowd with a variety of impromptu moments such as Jamie Foxx hopping on stage as Smokey Robinson, Miguel, Aloe Blacc and JC Chavez sang the Robinson-written ‘60s R&B classic “My Girl” to add his own vocals before handing his microphone to Earth, Wind & Fire’s Philip Bailey.

The Recording Academy consists of about 22,000 members, including musicians, producers, engineers and myriad record industry personnel. About 13,000 are voting members who determined this year’s Grammy winners. The eligibility period for recordings that were considered for this year’s awards is from Oct. 1, 2013, through Sept. 30, 2014.

(Times staff writers August Brown and Nardine A. Saad contributed to this report.)