Stars bring a box of chocolates to Grammys red carpet 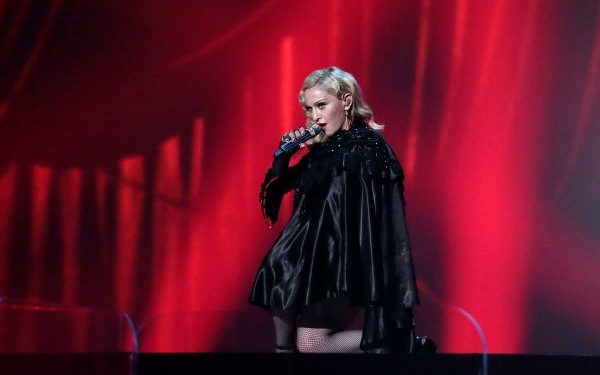 The Grammys red carpet is a lot like a box of chocolates — you never know what you’re going to get.

On Sunday night in Los Angeles, stars gave us a mix of styles: some sweet, some saucy, some sparkly and some that just left us speechless — and not necessarily for the right reasons.

Leading the way of uh-what-do-we-call-that? looks was Madonna. Although her career has taught us to expect the unexpected, her black-and-blush Givenchy bustier with epaulets, gloves, thigh-high boots and hat with birdcage netting kept fans fumbling for words. (She’s serving “matador realness,” E! correspondent Kelly Osbourne said.) Love it or hate it, her figure looked fab.

Meanwhile, Kim Kardashian showed off her newly shorn locks while serving us bathrobe glam in a glittering gold something from Jean Paul Gaultier. Even more befuddling was Charli XCX’s light Moschino tuxedo with bubblegum pink bow tie and some soft pink furs that enveloped her arms. “I hate boring fashion,” she said. Even so, this was just one risk too many to try at one time.

Sia also turned heads — with her full head of hair, the wig covering all but the camera-shy singer’s rich red lips. Accompanying her with a crimped white wig of her own was Maddie Ziegler, the dancer from the Lifetime reality TV show “Dance Moms” who has appeared in the artist’s music videos.

For those who opted for a gown, sheers and cut-outs were the trends of choice. Meghan Trainor (escorted on the carpet by her dapper-looking dad) and Jessie J had a perfect blend of sex appeal, sophistication and gothic glamour in black sheer Galia Lahav and Ralph & Russo, respectively. Ariana Grande (Versace), Miley Cyrus (Alexandre Vauthier) and Iggy Azalea (Armani Prive) were a few of the many who played peek-a-boo with cut-outs. Others opted to show some skin with some seriously plunging necklines. Beyonce (Proenza Schouler), Nicki Minaj (Tom Ford) and Lady Gaga (Brandon Maxwell) sexed it up best.

In a fashion league of her own was Gwen Stefani, who stunned in a black Atelier Versace jumpsuit with graphic bodice. She forwent her signature bold red lip for a neutral shade, and it paired perfectly. Taylor Swift was another fierce fashion contender in teal Elie Saab. Her pick played with the hi-low trend with the look of a long gown in the back giving way to a mini dress and an unexpected pop of purple via strappy Giuseppe Zanotti shoes in front. Katy Perry was another standout in a tea-length sleeved Zuhair Murad dress dripping with fringes of champagne-colored beads. She kept it fun and flirty with her lavender lob.

The guys of the Grammys also ran the gamut from creative to classic when it came to fashion. Pharrell Williams ditched his infamous Arby’s-esque hat for a 3M reflective sport coat, shorts and bow tie from Adidas. Navy trimmed with black also was popular, as seen on Ryan Seacrest and LL Cool J, and so was all-over black. Wiz Khalifa looked sharp in Armani and had the cutest accessory of the night — his son Sebastian, who made quite the style statement of his own in a velvet emerald suit.

At the 11th hour, Rihanna rushed onto the carpet swimming through a sea of pink ruffles — or just her Giambattista Valli gown. “I saw this dress on the Internet, and I just fell in love with it,” she told Seacrest. Not sure we can say the same for so much dress and so little time to take it in.