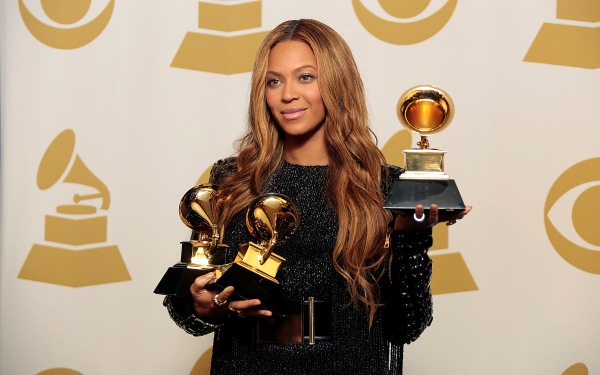 LOS ANGELES — Could it be that Madonna as burlesque matador in Givenchy was the last great Grammys fashion risk taker?

That’s certainly what it looked like as one tame look after another came down the red carpet before Sunday night’s show.

Beyonce played it safe in a custom black-beaded and embroidered tulle Proenza Schouler gown that was as close to basic black as Bey probably ever gets. Katy Perry worked the sheer look in a tasteful way, wearing a long-sleeved, short sheath dress by Zuhair Murad covered in icicle-like crystal fringe. It was gorgeous but hardly edgy (she left that to her purple hair).

Former fearless fashion flier Nicki Minaj, who has worn masks, stuffed animals and head-to-toe leopard spots in the past, went classy in a black-beaded Tom Ford gown with a plunge front and fringe trim. Lady Gaga, she of the nuns’ habits, human hair suits and meat dress, chose a silver gown by Brandon Maxwell that was as old school as her album of standards with Tony Bennett.

And Miley Cyrus wore a black Alexandre Vauthier spring 2015 couture column dress with side cutouts that looked like every other black dress she has ever worn. (Ciara’s Vauthier gown, a sea-worthy creation of undulating black organza ruffles, looked fresher, although it was actually an archival piece.)

Even Kim Kardashian stayed somewhat covered up in a heavily beaded Jean Paul Gaultier gown that resembled a haute bathrobe with too-long sleeves.

This was supposed to be the Grammys, that freak fashion show that brought us Gaga arriving in an egg in 2011, a 9-months-pregnant M.I.A. performing in a sheer dress with strategically placed polka dots in 2009 and Jennifer Lopez in the original plunge-front gown, a green tropical print, slit-to-the-waist Versace in 2000.

Some of the men did bring it, namely Brann Dailor of the metal band Mastodon rocking a balloon-print suit and his bandmate Brent Hinds in a Los Angeles Dodgers baseball uniform.

Director John Waters wore an op art patterned suit by Belgian designer Walter Van Beirendonck. And Pharrell Williams, who touched off an Internet meme with his Vivienne Westwood Mountain hat at last year’s Grammys, went with one of his old standbys, a shorts suit, this one by Adidas Originals with reflective technology. (He left the headgear at home.)

Then again, when you think about the shocking last few months in fashion — Rihanna going practically nude in a completely sheer dress to the CFDA Awards, Kardashian almost breaking the Internet with her bare backside in Paper magazine, Rosie Huntington-Whiteley, Rihanna and others wearing Tom Ford’s sheer pasties gown, Rick Owens showing genitalia on the runway — there are few fashion frontiers left to cross.

Maybe for pop stars, covered up is the new nude.

That seemed to be the message when Rihanna finally did show up Sunday night, gliding down the Grammys red carpet like Cinderella about to be late to the ball in a cloud of pink tulle that was an enormous Empire gown fresh off the Giambattista Valli couture runway.

From bad girl to Disney princess in an instant.