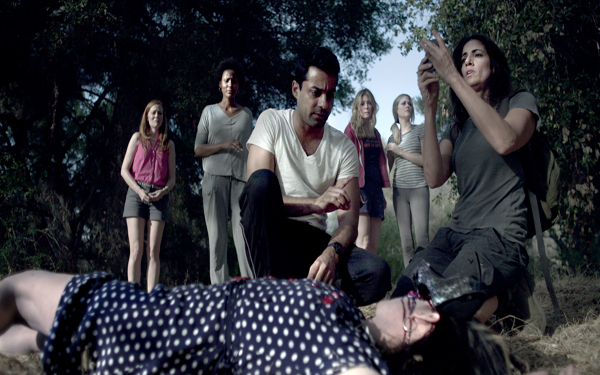 There’s nothing like a quiet retreat to the woods, where old sorority sisters can recount tales of the good ole days, catch up on their new and exciting lives and slowly get picked off and brutally murdered by a homicidal maniac. Wait… what?

For her second feature film, writer-director Jane Clark (Meth Head) has brought some girl power to the classic “cabin in the woods” narrative. Clark utilizes the genre’s characteristic tropes, but also pulls inspiration from the less popular, yet equally entertaining, camp aesthetic. Not eager to take itself too seriously, yet still exploiting classic horror film themes, Crazy Bitches becomes a lighthearted and rather messy romp of thrills and laughs.

Indeed, these crazy bitches thought their weekend away would be blissfully full of wine and gossip, but little do they know, someone out there is observing their every move, their every wish and desire, waiting for a moment when their vanities get the better of them. This particular killer, you see, has a penchant for justice against those that get swallowed up by material and superficial wealth. And unfortunately for this group of 30-something women and one gay man, they are all guilty of narcissistic idealism, putting them all in the murderer’s crosshairs. By examining the history of murders that took place at the same cabin decades prior, the women try to come together and fight for their survival despite the petty dramas that threaten to pull them apart.

The ensuing madness is part exploration of the intrapersonal relationships of these eccentric women, part social commentary on the trivial attachments we cling to so desperately. While the film may not put it so seriously, even with a murderous lunatic at hand, the central theme that drives the raucous plot forward gives Crazy Bitches a genuine soul to springboard from. How Clark decided to use that springboard results in a gory and girly mash-up of genres.

Clark steers away from putting a heroine at the head of the pack, making the narrative spontaneous and light on its feet, as well as keeping the murder mystery alive. The cast of women shares the spotlight rather equally, which clues us into their unique personalities and specific friendships that give the story a candid look at female relationships. From the woman none of others can secretly stand, to the woman fighting cancer, to the lesbian who gets a kick out of egging them on, Clark gives us a smorgasbord of entertainment through a variety of female leads. Yes, some of them are caricatures that will likely frustrate viewers, but that’s precisely the intent of the killer: uncovering the perils of vanity.

However, the laidback structure leads to a muddled arc that, especially by the end, leaves too many loose ends. There are various instances in which, due to the film’s flippant tone, it’s almost easy to dismiss the incongruities as narrative flare. But when Clark’s script attempts to tie it all together, it leaves us to scratch our heads and wonder if a coherent ending was the intention.

On the other hand, Clark may have intended just that, which is what makes her film something so inherently enjoyable to watch. If camp and a little bit of silliness isn’t up your alley, you might be turned off by what Crazy Bitches has to offer, but if you’re open for an easy laugh, and don’t get hooked on following the plot, you might find yourself pleasantly surprised.

Crazy Bitches will be released on VOD and other digital platforms on Friday, February 13th.