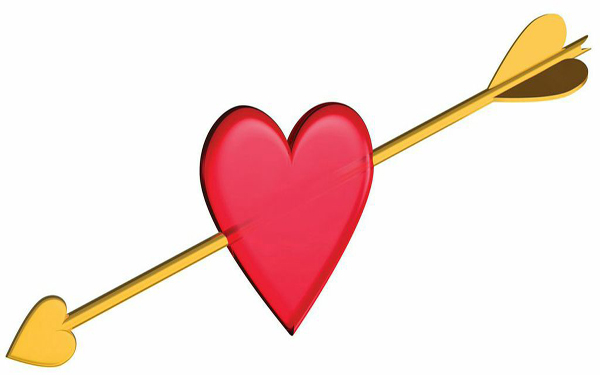 Inevitable. Emotional. Red. Chocolate fest. The same words that describe a particular time of the month for humans with double X chromosomes also define a particular time of the year called Valentine's Day. It's coming, I say to myself, as grocery stores display those chalky, one-sided conversation hearts, with their desperate and demanding pleas in capital letters. HUG ME. KISS ME. CALL ME. BE MINE.

I can't recall if I've ever been extremely moved by Valentine's Day—neither stoked nor depressed. And though this will be my 24th year celebrating it, I can only remember a handful of previous V-Days. There was that time I fell asleep during a midnight screening of Amélie; that time I was a freshman in high school and got asked out by the cute junior (we both got our scene haircuts done at the same salon, so obviously it was true love); that time my best friend in college gave me socks with little X's and O's all over, which I still wear; that time the middle-aged man in my creative writing class gave me a box of chocolates and an indecipherable letter typed in red hearts that was supposed to be read to the tune of Lady Gaga's "Bad Romance" (yes, wtf, that was the only clue). But what I mostly remember is this: for breakfast, my mom made heart-shaped buttered toast with pink sprinkles on top for me and my brothers. Also on the table was a small box of See's chocolates and a sheet of printer paper cut into a heart with I LOVE YOU written in endearing dad-scrawls. Valentine's Day was essentially My-Parents-Can-Be-Pretty-Cute-Sometimes Day, not So-Where's-Your-Boyfriend-At Day.

Still, I'm guilty of uttering the phrases "forever alone" and "Singles Awareness Day" on multiple occasions. Half of the time, I was a theatrical little idiot. Other times, I think I truly meant it. My friend Nicole, who's been in the same relationship the whole five years I've known her, used to hate the holiday as a teenager. She explains, "I had not been kissed at that point in my life, nor did I have any romantic prospects. Valentine's Day just seemed like a day to rub in all that I hadn't done."

But the truth is, this is the first year I won't be single on Valentine's Day, and that freaks me out because I was starting to find solace in that "forever alone" thing. After all, I go to concerts and restaurants alone as often as I do with other people. So I decided to do the rational thing: see a psychic.

Tina's office is cold, reeks of cigarettes, and has tons of Egyptian art. I only care to know about Valentine's Day and my love life, but I let Tina do her thing with my palms. You will have two children: a girl and a boy. Thursdays and Fridays are your good days. Seven, two, and five are your lucky numbers. You will live until your late eighties, early nineties. You're having a creative block; you need to find your center. You've stopped meditating. Wait, how do you meditate?

She asks if she answered everything I wanted to know.

"Well, I had planned to just come in here and say, 'I wanna talk about love…'"

Her head falls back as she laughs, exposing a missing upper molar. She assures me she's laughing with me, not at me.

"Tina, what do you think of Valentine's Day?"

"I think some people just want too much."

Tina means that some people expect too much from the wrong people. These "wrong people" aren't necessarily bad people. In fact, they are most likely the right people—for a different group of people, that is. They are "wrong" because they seem unwilling to give more of themselves. They appear like cheapskates of the emotional kind—stingy with their time, energy, and affection. It feels rotten to be disappointed in people, and it took me a long time to realize that I am the one at fault for letting myself feel that way.

I just recently rewatched Frances Ha. There's that scene after the dance recital Frances choreographs, where she's giggling and smiling at someone across the room, instead of being present in the conversation she's currently having. "Who are you making eyes at?" asks her boss at the dance company, assuming this starry-eyed look is of a romantic nature. "That's Sophie. She's my best friend," Frances replies. Earlier in the film, Frances refers to the idea of "your person in this life": someone who gets you entirely and makes you feel a happiness so overwhelming and butterflies-inducing that it should be sexual, but in most cases, it's not. It's the truest of connections: not just a mutual understanding, but a mutual adoration.

Though this movie is perhaps too sentimental at times (even for me), I support the "your person" concept—on a bigger, plural scale—between lovers, friends, and family members. It's the way Benny smiles because my feet don't touch the floor when we're sitting on the couch. It's the way Benny remembers to grab a matchbook from whichever bar or restaurant we go to because he knows I've started collecting them. It's the way I save my Lone Star bottle caps for Benny because he enjoys figuring out the puzzles that my granny-eyes can't even read. It's the way Sarah points out how when my reading glasses slip down my face, I clumsily push them up lenses first, instead of daintily at the bridge. It's the way I find it equally as charming that Sarah is the only person I know who uses a letterpress to make birthday cards and bookmarks; how she has fish named Gertrude Stein and Alice B. Toklas; how she has a container of SCOBY in her kitchen cupboard to make her own kombucha, and even though I think kombucha is nasty, I admire how everything Sarah does is carefully considered and about the process. It's the way I am always in awe of Cameron as he moves across a dance floor uninhibited; as he giddily tears off his shirt in the rain and does a cartwheel before walking into the subway station; as he holds me in Megan's kitchen on Thanksgiving and tells me I believe in you after I confess I'm kinda sorta scared of life at the moment. It's the way I spend a stupid amount of time gluing rhinestones to a jar of Vaseline just because I know it will make Audrey laugh. It's the way Max drives seven hours to take me to an airport I live only an hour away from because, what the hell, We can get dinner, and he claims he is in need of a road trip anyway.

I won't feel forever alone, now or ever, when surrounded by people who love me deeper because of each new quirk they uncover. These are my people. My special someones. My sweethearts all year-round.