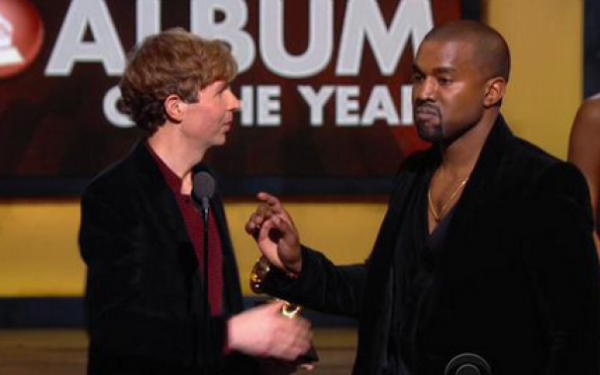 LOS ANGELES — Kanye West’s mock stage-rushing during Beck’s acceptance speech for album of the year at the Grammys initially seemed like a fun joke at his own expense. The last time West pulled a similar stunt, it was 2009, and he was protesting Taylor Swift’s winning over Beyonce during the 2009 Video Music Awards.

But in remarks to E! after Sunday’s telecast, it’s clear that West was deadly serious about believing that Beyonce was robbed by an undeserving Beck.

“I don’t even know what (Beck) said. I just know that, the Grammys, if they want real artists to keep coming back, they need to stop playing with us. We aren’t going to play with them no more,” West told his somewhat stunned interviewers during E!’s post-show wrap-up. “Beck needs to respect artistry, he should have given his award to Beyonce. At this point, we tired of it. What happens is, when you keep on diminishing art, and not respecting the craft, and smacking people in the face after they deliver monumental feats of music, you’re disrespectful to inspiration.”

Beck seemed considerably more accommodating to Kanye — the newly minted album of the year winner invited Kanye to come back onstage, as he clearly hadn’t prepared much of a speech for the event. West went on at length in the after-show interview to protest the Grammys’ perceived Beyonce snub (though, for what it’s worth, Beyonce is the most nominated female artist in Grammy history and sixth most nominated artist overall).

“We, as musicians, have to inspire people who go to work every day, and they listen to that Beyonce album, and they feel like it takes them to a different place,” West said to E!. “And then they do this promotional event, and they’ll run the music over somebody’s speech, the artist, because they want commercial advertising. We aren’t playing with them anymore. And by the way, I got my wife, my daughter, and I got my clothing line, so I’m not going to do nothing that would put my daughter at risk, but I am here to fight for creativity. That’s why I didn’t say anything tonight, but you all knew what it meant when ‘Ye stepped on that stage.”

“That’s what’s great about live TV, live is live, it’s unpredictable,” Portnow said. “Whatever happens is part of the culture of the people in the room. When you have creative people in the room, they do all kinds of things, and it turned out to be a fun moment at the end of the day.”