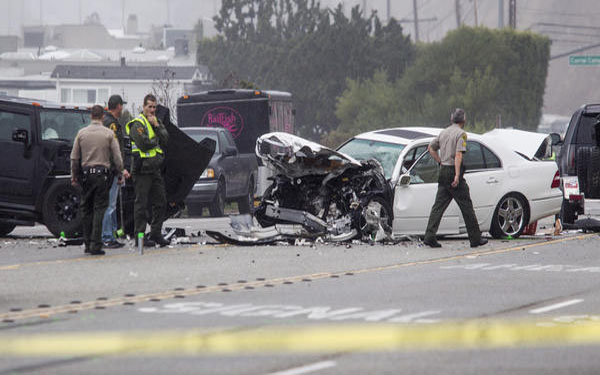 A person who was in this white car was killed, and five other people were injured, in the crash.
(Credit: Ringo H.W. Chiu / Associated Press)

Sgt. Philip Brooks of the Los Angeles County Sheriff's Department told the Los Angeles Times that investigators would ask Jenner to sign a form to release his cellphone records to authorities.

Meanwhile, DMV records showed that the driver killed in the Malibu crash had not had a valid license since 2007, when it expired.

Alan Nierob, the former Olympian's publicist, has said Jenner would provide the records to show he was not texting, Associated Press reported.

Brooks said investigators would try to obtain cellphone records for the other drivers involved in the crash that killed Kim Howe, a 69-year-old Calabasas woman. At this point, he said, all drivers were being investigated.

The crash investigation likely will take months, the sergeant said: "It's like putting Humpty Dumpty back together again."

Along with reviewing cellphone records, detectives plan to examine the vehicles, re-create the crash on paper, talk to witnesses and look through any photographs and video.

If the probe reveals one of the drivers committed a vehicle code violation at the time of the crash, more serious charges -- including vehicular manslaughter -- are a possibility, he said.

Authorities say the crash happened when a Lexus slammed into a Prius that had stopped or slowed down on PCH near Corral Canyon Road in Malibu.

Jenner, the reality TV star of "Keeping Up With the Kardashians," was behind the Lexus in a black Cadillac Escalade, hauling an off-road vehicle. He rear-ended the Lexus.

The Lexus was pushed into the path of a Hummer, causing a head-on collision. Howe, the driver of the Lexus, died at the scene.

According to the California Department of Motor Vehicles, Howe had not had a valid driver's license since 2007, when it expired. Jenner, who rear-ended Howe's vehicle, has a valid license, the DMV said.

Paparazzi were following Jenner, but Brooks said it didn't appear Jenner was trying to outrun them.

Brooks said Jenner was photographed holding a cellphone but it was unclear when it was taken. Five others were hurt, but not seriously, in the crash.

On Sunday, Jenner issued a statement calling the crash a "devastating tragedy."

"My heartfelt and deepest sympathies go out to the family and loved ones, and to all of those who were involved or injured in this terrible accident," Jenner said in a statement released by his publicist. "It is a devastating tragedy and I cannot pretend to imagine what this family is going through at this time. I am praying for them. I will continue to cooperate in every way possible."