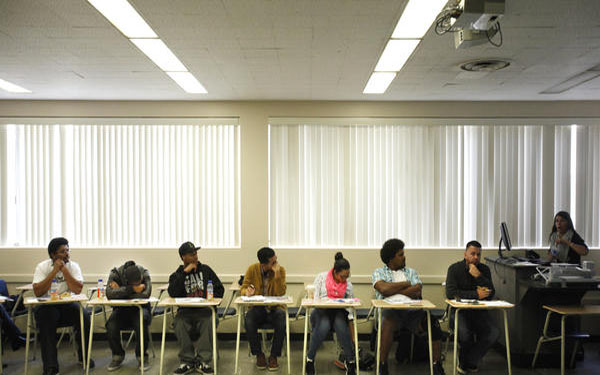 A new analysis from the CSU Health Insurance Education Project found that half the approximately 445,000 students in the CSU system are able to purchase health insurance for less than they would have to pay in fines for remaining uncovered.

Walter Zelman, project director and chairman of the Cal State L.A. Public Health Department, said the numbers challenge the idea that the cost of health insurance — often cited as the main reason people don’t sign up — is unaffordable.

“It’s pretty striking that half our students, they shouldn’t even be thinking about this. It’s so obvious,” Zelman said. “It’s a no-brainer.”

When Congress approved the Affordable Care Act, lawmakers required almost everyone starting in 2014 to have health insurance, or pay a fine.

Sunday is the deadline to sign up for insurance for 2015 through Covered California, the state’s insurance exchange. Although 1.2 million people have either signed up for new policies or renewed existing Covered California plans, the exchange is still thousands away from its goal of enrolling 1.7 million by the end of the sign-up period.

Zelman said he hopes the Cal State data will show that health insurance won’t stretch students’ pocketbooks. Healthy young people have long been a focus of enrollment efforts, with some officials worrying that if not enough signed up, insurance companies would be left with too many sick and expensive customers, which would eventually cause carriers to raise premiums.

The CSU analysis looked at the cost of the cheapest insurance plan offered through Covered California and found that approximately 50 percent of CSU students can purchase health insurance for less than $325, the fine for the 2015 tax year.

The analysis found that all financially independent CSU students with annual incomes of $18,000 or less and all four-person families with an income less of $45,000 or less can purchase insurance for less than the fine.

Approximately 75 percent of these students are eligible for Medi-Cal, the state’s free low-income health program that was expanded under the Affordable Care Act. The remainder are eligible for subsidized plans through Covered California.

At the six campuses in the L.A. region — San Bernardino, Los Angeles, Northridge, Pomona, Dominguez Hills and Long Beach — the lowest monthly premium available to a 21-year-old who makes $18,000 annually or less is about $26 a month.

The premiums were much lower at the other CSU campuses across the state; at those 17 campuses, that same student can get a plan with a monthly premium of $5 or less.

Last year, Obamacare enrollment among CSU students exceeded expectations, with 60,000 signing up and the numbers of uninsured dropping by 60 percent. Roughly 10 percent remained without health insurance at the beginning of this year’s open enrollment.

Zelman said he thinks there’s greater awareness about health insurance availability on campus this year, and that demand for enrollment assistance has been increasing as the Sunday deadline approaches.