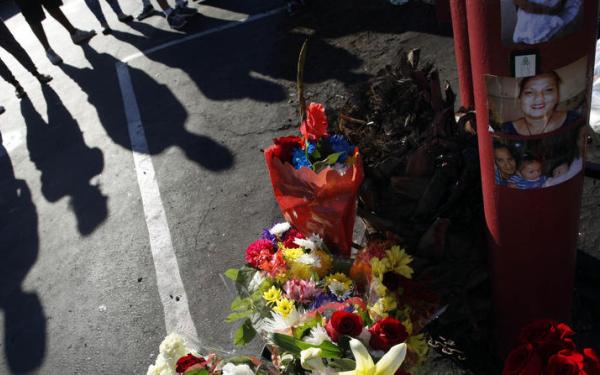 A makeshift memorial for Daniella Palacios, a 44-year-old mother of eight, who was fatally struck in a hit-and-run crash as she rode her bike in Anaheim last fall.
(Credit: Barbara Davidson / Los Angeles Times)

Los Angeles is launching a hit-and-run alert system that will publish information on social media about cars and drivers linked to fatal and other severe hit-and-runs.

The city of L.A. sees about 20,000 hit-and-run collisions a year. The majority result only in property damage. But in 2014, 27 people died in hit-and-run crashes in Los Angeles, and 144 others were severely injured, the city said.

Publicizing a make, model, color and license plate number of a vehicle could encourage a neighbor, friend or even a cab driver in the area to call 911, Los Angeles Police Department officials told the Los Angeles Times.

Many hit-and-run collisions in Los Angeles leave few clues to go on, so the public’s participation can help detectives locate drivers, they said. From 2008 to 2012, according to the most recent public data, the LAPD solved only one in five hit-and-run cases. Of those cases, fewer than half were closed through an arrest.

The information also will go out to DASH bus drivers and the city’s 2,300 licensed taxi drivers on their dispatch systems, a Transportation Department spokesman said, with the possibility of expansion to other city drivers, such as Department of Water and Power and Bureau of Sanitation workers.

City Hall also will offer standing rewards for information that leads to the arrest and conviction of a hit-and-run driver: $50,000 for crashes where someone was killed; up to $25,000 if the victim was severely injured; $5,000 if someone was hurt; and $1,000 if property was damaged.

“These are not accidents — these are crimes,” Los Angeles City Councilman Mitchell Englander, who co-authored the motion for the standing rewards, said at a news conference outside City Hall.

Fleeing the scene of an accident where someone was killed or severely injured is a felony punishable by up to four years in prison and $10,000 in fines. Drivers convicted of misdemeanor hit-and-run — typically, cases in which no one was seriously injured — can face $1,000 in fines and up to a year in jail.

“We need to change the culture of driving away when you strike a human being with your car,” Councilman Joe Buscaino said. “Pull to the side of the road, exchange information, and do what is right.”

The reward money will come from the city’s general fund, which pays for basic city services. Using social media won’t cost the city anything, Englander said, and could save money in the long run from the LAPD’s budget if more hit-and-run cases are solved.

State Assemblyman Mike Gatto (D-Los Angeles) in December introduced a bill that would allow the California Highway Patrol to display details on hit-and-run drivers on electronic freeway signs near the scene of a crash. The same bill was vetoed in September by Gov. Jerry Brown, who said he feared that adding more information to the Amber Alert system could overload it.

The bill is modeled after a similar system in Denver, where police issued alerts in 17 cases over two years and made arrests in 13 of them, Denver officials said last year.