It was an uber stylish, successful and ‘Happy’ year for Pharrell Williams 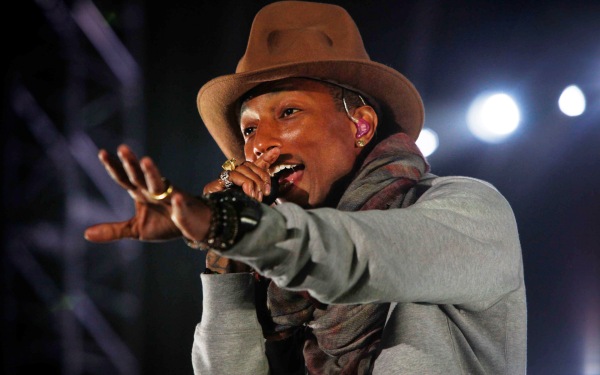 Williams performs on the outdoor stage at the Coachella Valley Music and Arts Festival in 2014.
(Credit: Bethany Mollenkof/Los Angeles Times/TNS)

It’s hard to imagine many people who’ve had as productive a year as Pharrell Williams, the singer, producer, actor, designer and trendsetting fashion plate who took home the awards for best pop solo performance and urban contemporary album at this year’s Grammys, where he was nominated in six categories. In 2014, he released an album, took a judge’s seat on “The Voice” and performed at numerous events around the world, from intimate charity gigs to massive music festivals.

In the same period he managed to launch and promote a list of fashion collaborations ranging from $20 T-shirts with Japanese fast-fashion brand Uniqlo to $12,500 train-shaped handbags with under-the-radar French luxury brand Moynat. 2015 is off to a strong start too, already including the February cover of GQ magazine, a cartoon cameo on the Grammy-night episode of “The Simpsons” and the recent announcement that Williams is reteaming with former U.S. Vice President Al Gore to organize a seven-continent Live Earth concert event on June 18. And while he has emerged as a nearly ubiquitous presence in the style world, he has miraculously managed to do so without over-exposing his personal brand. Here’s a look at some of Williams’ honors, accolades, collaborations, achievements and fashion-world forays of 2014.

Williams kicks things off with a bang, not only by snagging four trophies at the 56th Grammy Awards but also managing to hijack the red carpet at the same time, turning up in a red Adidas track jacket, white T-shirt, blue jeans and sporting a distinctive piece of headgear, a brown hat with a wide brim and high, battered crown. The Vivienne Westwood Mountain Hat spawns a full-blown millinery meme that includes a parody Twitter account and comparisons to Canadian Mounties, Smokey Bear and the Arby’s logo.

The Headwear Assn. announces the results of an online poll that crowns Williams its 2014 “hat person of the year” (Feb. 5). The single “Happy,” from the “Despicable Me 2” soundtrack, which had been released on Dec. 18, 2013, goes gold (Feb. 6) and then quickly platinum (Feb. 21). Williams is on hand in the Marine Mammal Room at the New York Museum of Natural History for the New York Fashion Week launch of RAW for the Oceans, a collaborative effort between the singer’s Bionic Yarn textile company and the G-Star Raw denim label that will harvest plastic bottles from the ocean and recycle them into apparel. (Feb. 8)

Nominated for original song (for “Happy”), Williams hits the Academy Awards red carpet (March 2) in a custom Lanvin ensemble that includes a black, wool, one-button, shawl-collar tuxedo jacket and matching shorts. He doesn’t win the Oscar but his “Bermuda tux” earns him accolades as a sartorial standout — and his Grammy hat fetches $44,100 in an online charity auction. (The winning bidder: Arby’s.) The next day his first album in nearly eight years, “Girl,” debuts at the No. 2 spot on the Billboard 200 chart. On March 31, NBC announces, via Twitter, that Williams will be joining “The Voice” as a coach for the reality music competition’s seventh season.

Williams’ collaboration with Japanese fast-fashion retailer Uniqlo makes its debut in stores (April 21). The “I Am Other” collection includes a range of T-shirts, baseball caps and pullover hoodies ($19.90 to $29.90) emblazoned with messages of individuality including “The Same is Lame” and “Think other.” Williams decamps to Indio, Calif., for two consecutive weekend performances at the Coachella Valley Music and Arts Festival (April 12 and April 19), where the likes of Gwen Stefani, Snoop Dogg and Diddy join him on stage. Time magazine announces its 2014 roundup of the “100 Most Influential People in the World,” a list that includes Pope Francis, Malala Yousafzai, Edward Snowden — and Pharrell Williams (April 24).

Rizzoli publishes “We Are FriendsWithYou,” a monograph covering the first 12 years of fine art collective FriendsWithYou. Among the contributors is Pharrell Williams, a longtime collaborator (May 6). Williams drops by “Jimmy Kimmel Live” (May 7). To mark the release of his album, Williams curates an art exhibition titled “Girl,” at the Galerie Perrotin in Paris. It includes 48 works — 12 created specifically for the exhibition — by some 37 artists, including Yoko Ono, Terry Richardson, Cindy Sherman and Takashi Murikami (May 27 to June 25).

Williams lands at No. 38 on Forbes magazine’s 2014 “Celebrity 100” list (between James Patterson and Glenn Beck), a ranking based on a combination of factors including fame, impact and earnings — the last of which Forbes estimates at $22 million over the previous year (June 30). It’s all the more noteworthy as he didn’t even appear on the 2013 list. Expect him to rocket up the 2015 list.

A unisex fragrance collaboration between Williams and Comme des Garçons Parfums launches at the brand’s Dover Street Market in London (Sept. 1). Called Girl, the scent is conceived by Williams, created by perfumers Christian Astuguevieille and Antoine Lie and packaged in bottles bearing the cartoonish artwork of street artist Kaws. Williams and a cadre of models debut the Spring-Summer 2015 RAW for the Oceans collection in a dimly lighted, smoke-filled, under-construction Wall Street bank building during New York Fashion Week (Sept. 5). “Happy” is certified six times multiplatinum by the RIAA (Sept. 15) and the single “Come Get it Bae” is certified gold (Sept. 17).

A partnership with 165-year-old French bag and accessories maker Moynat launches at the Colette boutique in Paris (Oct. 13). The whimsical railroad-themed Moynat X Pharrell Williams collection includes scarves and leather pouches with train graphics and a range of clutches and bags shaped like railroad cars and rendered in wood, resin or leather. The collection, which speaks to an inner child’s fascination with trains, has a decidedly grown-up price point, from around $300 for a scarf to well above $12,000 for a black plastic handbag shaped like a locomotive.

Pharrell Williams exits 2014 the way he entered it — on a high note. In advance of showing the Paris-Salzburg 2014-15 Metiers d’art collection, French luxury brand Chanel releases a short film by creative director Karl Lagerfeld titled “Reincarnation” that stars Williams and model Cara Delevingne as 19th century Austrian royalty and includes the song “CC The World,” which Williams wrote specifically for the soundtrack (Dec. 1). The Headwear Assn. announces Williams will be inducted in early 2015 into the Headwear Hall of Fame — alongside Tim McGraw, Alicia Keys, Delevingne and Sean Connery (Dec. 2).

A star-studded dinner party in Century City to celebrate his Adidas collaboration draws the likes of Samantha Ronson, Ellen Pompeo, Khloe Kardashian and fellow “The Voice” judge Gwen Stefani. At the dinner, Williams says his many collaborations are “a wonderful opportunity.” “I feel blessed that I am able to express myself on this platform” (Dec. 3). He follows that with a star on the Hollywood Walk of Fame (Dec. 4) and the news that he’s received six 2015 Grammy nominations — tying Sam Smith and Beyonce for the most-nominated artist (Dec. 5).