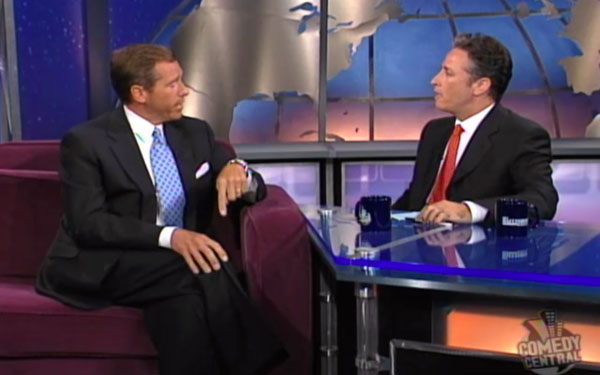 News of Brian Williams’ six-month suspension from “NBC Nightly News” and Jon Stewart’s planned departure from “The Daily Show” happened on the same day, linking both men in the media news cycle. In a way, it’s fitting, because Stewart and Williams have gotten friendly over the years.

Williams has been a guest on “The Daily Show” more than 20 times in Stewart’s 17 years as host, but his first appearance in 2003 features some sad ironies when viewed in light of where Williams stands today.

When he first appeared, Williams was in line to succeed Tom Brokaw as anchor and had already been to Iraq and delivered his report on the downed Chinook helicopter. At the time, Dan Rather was still anchor of “The CBS Evening News” and Stewart took a few jabs at the diminished reputations of both anchors.

Brokaw “is losing it,” Stewart said.

“He is so not losing it,” Williams responded. “Every day, I joke with folks at NBC, he becomes larger.”

In the days leading up to Williams’ suspension, as rumors swirled in the media about the anchor’s possible fate, there was a Page Six report that Brokaw was asking for Williams to be fired. That report was denied by Brokaw and NBC, but it served to highlight just how large a presence the former anchor still has in the NBC News division.

After Williams mounted a passionate appraisal of Brokaw’s icon status, Stewart countered by saying, “But Dan Rather is losing it.”

Rather would lose his CBS anchor chair in 2005 after controversy surrounding a report about President George W. Bush’s service in the National Guard during the Vietnam War. After stepping down from “The CBS Evening News,” Rather remained with the network until 2006 when his contract was not renewed and he left to host “Dan Rather Reports” on AXS TV.

But it’s Williams’ comments about how anchors should behave on and off the news that hold the most interest. It wasn’t Williams’ initial report from Iraq in 2003 that got him into trouble, but the exaggerated and untrue versions that he subsequently told on talk shows, and later on the nightly news itself, that ultimately proved to be his undoing.

During a discussion of political biases, Williams said, “When you see these correspondents on various Sunday shows, who have an opinion Sunday morning and then go back to covering the news Monday, that can be a little dicey.

“Our work, I can speak for NBC News, our newsroom... talk about checks and balances, it goes through an inordinate number of editors,” Williams said. “Every word I write, before it goes on air, goes through all kinds of traps and filters and it’s read by all kinds of different people who point out biases.”

Perhaps if someone had been checking facts during Williams’ Jan. 30 report on Tim Terpak, they would have caught his most recent false reporting on the Iraq helicopter incident.

“People check what you do?” Stewart said.

“It is hard to believe,” Williams said.

“We gotta get one of them,” Stewart said.

“We have a whole slew of people,” Williams said.