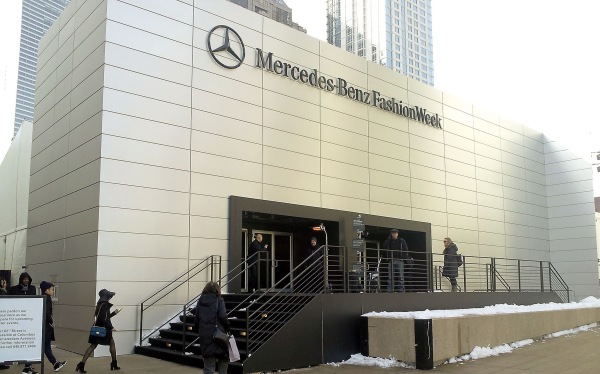 The temporary venue known as the tents at Lincoln Center, home to Mercedes-Benz Fashion week, during a previous season of Fashion Week.
(Credit: Sara Bauknecht/Pittsburgh Post-Gazette/TNS)

Once upon a time, New York Fashion Week was synonymous with Bryant Park: Only the upper echelon of the industry got invited, and the rest found out about the trends inside the tents from the pages of magazines.

But that was then. In the past five years, Fashion Week has moved uptown to Lincoln Center, many designers have expanded their lists of who gets past the velvet ropes to include influencers in the digital media realm, and off-shoots of Fashion Week have cropped up across New York City.

Heading into 2015, the twice-a-year fashion affair is about to enter yet another chapter. When the runway shows previewing looks for fall/winter 2015 kick off on Thursday (Feb. 12) for a week, it will be the final time those under the umbrella of Mercedes-Benz Fashion Week will be headquartered at Lincoln Center on Manhattan’s Upper West Side. After this month’s shows, Mercedes-Benz also will pull out as title sponsor for the tent shows, and WME-IMG (the company that owns Mercedes-Benz Fashion Week) is expected to buy MADE Fashion Week, a series of shows in downtown Manhattan that started about five years ago as an alternative venue during New York Fashion Week. These have largely been for up-and-coming designers to show their collections.

All the while, questions about New York Fashion Week’s relevancy and who it really should be for — traditional media? bloggers? celebrities? retailers? — continue to challenge designers to think and rethink what a fashion show should be.

“Everything evolves. It’s the law of motion. New York Fashion Week is no exception,” Steven Kolb, chief executive officer of the Council of Fashion Designers of America, told the Pittsburgh Post-Gazette in an email.

The departure from Lincoln Center was prompted by a lawsuit filed by city park advocates arguing that the 2.4-acre Damrosch Park space where the tents are erected should no longer host private vendors and events. According to the New York Daily News, the Bloomberg administration allowed Lincoln Center to cut down trees and uproot azalea beds to make room for the temporary structures that housed the runway shows. Before the suit, Fashion Week would have been at Lincoln Center until 2020.

There are plans for the Culture Shed structure that’s part of the new Hudson Yards development on Manhattan’s West Side along the Hudson River eventually to become the hub for New York Fashion Week, Kolb says, but it’s still under construction. In the meantime, the search is on for another centralized spot for the runway shows come September.

But even before the boot from Lincoln Center, some designers have been pursuing new locations for their shows — whether it be for financial reasons, disenchantment with what some have described as a “circus” or “trade show” vibe inside the tents or just for the chance to try something different.

“I think that New York Fashion Week has definitely become more about the individual brands trying to express their unique story,” says Jimmy Lepore Hagan, vice president of strategy for New York City-based designer Nanette Lepore, a native of Youngstown, Ohio. “I think that brands have responded to the customer demand for more narrative and more substance.”

Nanette Lepore “loved the idea of everybody being together” inside the tents, he says, “but it has to make sense.” This season, the brand will present its runway show at a new venue downtown in an attempt to create an environment that better reflects it and is more intimate for those who attend.

“We’re now looking at this as every season is an opportunity to reinvent what we’re doing,” he says. “It’s a good challenge for the brands to come up with something unique.”

This spirit of innovation and imagination is what the industry is craving to keep New York Fashion Week engaging — both for insiders and those on the outside watching it all unfold on blogs, live Web streams and social media, says lifestyle reporter Patty Hughes. She’s a style contributor on the “Rachael Ray” talk show with an extensive background in runway show production, including years at work behind the scenes at New York Fashion Week.

“You’ve got to keep the audiences entertained,” she says. “They want to see a little more punch to it.”

And where will that next take New York Fashion Week? For now, it’s anyone’s guess. Last season alone, Ralph Lauren and Opening Ceremony transformed their presentations into a “4D” spectacle projected against a fountain on a lake in Central Park and a play at the Metropolitan Opera House, respectively. Or maybe New York Fashion Week even has potential to be televised someday, Hagan says.