How Colombia became the flower king of Valentine’s Day 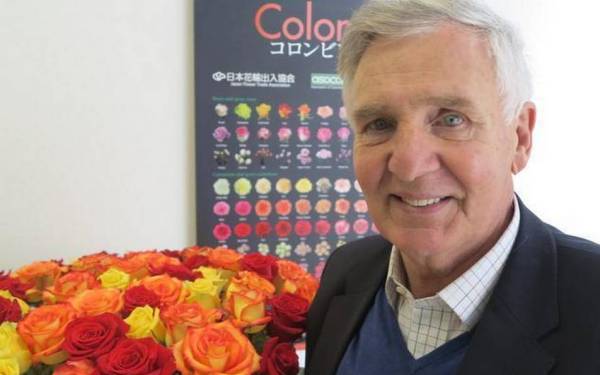 John Vaughan, 80, began growing flowers in Colombia in 1969, making him one of the pioneers of the industry.
(Credit: Jim Wyss - Miami Herald)

BOGOTA, Colombia — The Valentine’s Day industrial complex, complete with mandatory red roses and bouquets of flowers, owes a debt to the sweeping savannahs around this capital city.

Fifty years ago, Colombia shipped its first batch of fresh-cut flowers to Miami ($20,000 worth of carnations by some accounts) and jump-started a billion-dollar industry.

In a handful of decades, flowers in the United States went from being high-end luxury goods sold only at specialized shops to being ubiquitous — from grocery stores to gas stations to traffic lights.

In the process, this Andean nation became a global flower power: The country will export 500 million flowers for Valentine’s Day and three out of every four stems delivered for the occasion will likely come from here.

The story of how Colombia became the world’s second-largest flower exporter and reshaped U.S. buying habits in the process can be traced back to a handful of adventurous entrepreneurs, a precocious college student and U.S. Cold War policies.

The godfather of the nation’s flower trade, many agree, was Edgar Wells, a Colombian of English descent who saw the astronomical flower prices in Washington, D.C., and recognized the business opportunity.

At the time, most of America’s fresh-cut flowers were coming from California and Colorado, but they were rare, expensive and reserved for special occasions.

Wells returned home, set up Flores Colombianas, and made his first shipment to Miami in October 1965.

“Wells was a playboy but he had the idea,” said Charles Weston, 83, who began managing Flores Colombianas in 1969. “He saw that Washington was full, full of socialites and all they did was go to parties and take each other presents, which were often flowers. And he said, ‘Why don’t we get into that business.’ ”

His timing was impeccable. In 1961, President John F. Kennedy launched the Alliance for Progress, which aimed to stave off the communist threat in the hemisphere by bolstering U.S.-Latin America cooperation. Colombia was a showcase for the effort and Kennedy came here that December. (To this day, Bogota’s densest neighborhood is still called Ciudad Kennedy.)

It was the same year that the U.S. Agency for International Development, or USAID, was launched and among its first tasks was to help Colombia develop its agricultural industry, said the U.S. Embassy’s Agricultural Counselor Michael Conlon.

“So they spent hundreds of millions of dollars during the 1960s working on agriculture and focusing a lot of it on nontraditional agricultural exports,” he said.

In 1966, USAID sponsored the “Nebraska Mission,” which brought U.S. university researchers and agricultural experts to Colombia to provide technical assistance. Among that group was a Colorado State University student named David Cheever. Inspired by Wells’ work, Cheever wrote his master’s thesis in 1967, titled “Bogota, Colombia as a Cut-Flower Exporter for World Markets.”

Cheever saw opportunity in Colombia’s privileged spot on the equator, its high-altitude plains and proximity to the U.S. via newly inaugurated jet flights to Miami.

“Cheever is this revered figure because he had these critical insights,” said U.S. Ambassador Kevin Whitaker, who visited flower farms near the city of Medellin earlier this month. “It’s a remarkable story.”

That master’s thesis helped usher in the era of modern growers. John Vaughan, a Colombian of English descent, was helping his father run cattle and grow cotton when he decided he wanted to get into the new “exciting” field. In 1969, he and two brothers started growing carnations on a 2.5-acre plot.

“We decided that we know nothing about this so let’s go for it,” said Vaughan, 80, who’s still in the business. “That’s the way we started.”

At the time, there were only two other growers, including Flores Colombianas, but the flower rush was on. Cheever — in what was, perhaps, the best use ever of a college education — put his thesis to the test by launching Flor America that same year.

In the beginning, the pioneers were collaborators rather than competitors, Vaughan said, and Cheever was seen as an innovator.

“We used to just copy what (Cheever) did,” Vaughan said. The green-house structures that are still in use today on flower farms were largely developed by him. “He was very generous with his ideas and knowledge.”

The early years were trial and error. Vaughan recalls hand-carrying boxes of flowers to Miami. On one occasion, in South Florida, he resorted to flipping through the phone book looking for potential buyers for his carnations. When he saw a full-page ad for a company called Carnation he thought he had struck gold. It was only after hours on the phone and “being passed around like a football thrown by Tom Brady” that a manager finally informed him that they were a dairy company with little use for flowers.

“They work by the square foot,” he said of outlets such as Costco and Walmart. “So we had to prove to them that it was better to have flowers than, say, Campbell’s soup. That’s a tough sell.”

Things began to take off in the early 1970s when Weston, with Flores Colombianas, established El Dorado Trading Company in Miami.

“After that, flowers were going straight into refrigeration and we had sales girls who could talk to all of the cities in the United States,” he said.

The industry has only blossomed since then. Now, there are an estimated 350 flower growers in Colombia who employ 130,000 workers. The industry shipped 200,000 tons of flowers in 2013 worth about $1.3 billion.

Even so, the sector is emerging from a rough patch. The combination of the U.S. economic crisis in 2008 and an appreciating Colombian peso put many out of business.

“But this is a special year,” predicted Agriculture Minister Aurelio Iragorri as he toured a flower farm recently. The peso has devalued 17 percent in the last 12 months — making flowers cheaper for importers — and the U.S. market has recovered.

“We’re in a position where people (in the United States) will not only want flowers for Valentine’s Day but as a year-round consumer good,” he said.

Although the U.S. is the world’s second-largest purchaser of flowers after Germany, Americans spend far less on flowers than their European counterparts. And that means that even as the industry settles into its Golden Anniversary, there’s room to grow.

“If the United States bought the flowers that they should buy, we would have to have a second story here in Colombia to grow flowers,” Vaughan said. “Can you imagine the potential?”