Oscar picks of three Academy voters: a producer, a director, an actress 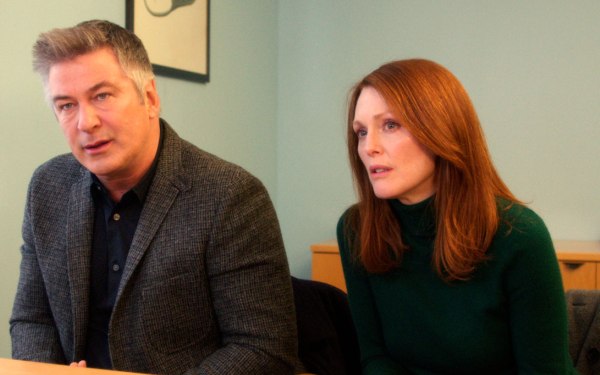 Julianne Moore for Still Alice was picked by all three anonymous voters to win in the lead actress category.
(Credit: Sony Pictures Classics)

With Oscar ballots now out, we asked three members from different branches of the Academy of Motion Picture Arts and Sciences to dish, anonymously, about their voting choices. Here's what they had to say:

Picture: "Boyhood" just bowled me over. It embodies so much love, and that's a rare thing today. The concept behind it is fascinating, but the results are what distinguish the film. I liked other movies — "Birdman" is a stylistic tour de force, and "American Sniper" was an amazing, complex film made by one of our greatest directors — but "Boyhood" is the one that has stayed with me all these months.

Director: It's been great to see a certain light shined on Richard Linklater. He has such humility, and his love for his subjects really comes across in his movies. I mean, come on, this is a rare moment where we can honor something so unique and original.

Actor: Michael Keaton just tears you up and is hysterically funny in "Birdman," but Bradley Cooper just continues to astound me. There's not a false note in what he does in "American Sniper." Some people complain that the movie isn't complex enough, but it's all there in his performance, the way the character falls into these patterns. It's shattering.

Actress: It's crazy that Julianne Moore has never won. She just continues to floor me, and I thought she was fantastic in "Still Alice." I'm really excited to hear her name called.

Supporting actor: J.K. Simmons gives a big, juicy performance in "Whiplash," but I found it less surprising over time. Mark Ruffalo in "Foxcatcher" ... there's always a great subtlety to what he does. That workout scene between him and Channing Tatum at the beginning communicates so much in gesture.

Supporting actress: Patricia Arquette gives "Boyhood" its pulse. The conflict and tension emanating from that mother character and her bad choices in men is so interesting. And I loved watching her and Ethan Hawke age. That was fascinating to see unfold.

Adapted screenplay: I want to vote for Paul Thomas Anderson and "Inherent Vice." Anyone who takes on Thomas Pynchon deserves a prize. But I wanted that movie to explode more on the screen. "Imitation Game" ... the story is riveting, but I found it less compelling than "The Theory of Everything," which was really well-done in the way it focused on the relationship.

Original screenplay: There's a lot of great work in this category. Wes Anderson is such an original, creative industry unto himself. He'll always be fine. I'll come back to "Foxcatcher" with writing that is understated and nuanced with tons of subtext. Maybe it's all subtext. I like that.

Picture: "Boyhood" moved me. Some of the others feel like Oscar bait. And while "Boyhood" wasn't a perfect picture, it was a pretty accurate depiction of real life. And that's the kind of movies I like.

Director: Richard Linklater. Conceptually and in terms of execution, "Boyhood" was a remarkable achievement. And he's just a great director. He's built a body of work that's great too, so many good films in different genres.

Actor: Eddie Redmayne did a great job in "The Theory of Everything." There's a little bit of "My Left Foot" in there, but it's something uniquely its own thing. There are so many things that could have gone wrong with that performance but didn't. You've got to hand it to him.

Actress: Julianne Moore. I didn't think the movie was terrific. But it didn't stink. And she was great. Honestly, I was just watching her performance, and not only was it a technical marvel, the way she charted the progression of Alzheimer's, but it was emotionally devastating.

Supporting actor: I loved "Whiplash" and J.K. Simmons. It's a great performance by a hardworking actor, a guy that's been acting for a while who finally has the spotlight shine on his abilities. That makes me feel good. There are so many good actors in Hollywood like him, people just waiting for their chance to show what they can do.

Supporting actress: Patricia Arquette was so believable playing the mom in "Boyhood." Like J.K. Simmons, she's been good for a lot of years too.

Adapted screenplay: I thought the script for "The Imitation Game" was better than the film. It was well-written and worked on a lot of levels. "Whiplash" seemed more like a performance and directorial achievement. Like that drum solo at the end. It's great, but on the page, it'd be pretty spare.

Original screenplay: I liked "Nightcrawler" as a screenplay, but I want to give as much love to "Boyhood" as I can. It so beautifully captures ordinary dialogue and a depiction of real life.

Picture: None of these movies really excited me ... with the exception of "The Grand Budapest Hotel," which I thought was amazing. Very clever and smart and a beautifully realized world.

Director: It'd have to be Wes Anderson, right? I think this is his best movie, and he's made some good ones.

Actor: Michael Keaton did an incredible job in "Birdman." The movie itself was a little overdone, but he kept it grounded with that performance.

Actress: Julianne Moore. What else can be said about her? She's an actor's actor, someone who brings so much integrity and truth to the work.

Supporting actor: J.K. Simmons. Everyone else is going with him, aren't they? I don't think I've heard anyone else's name brought up in this category all year.

Supporting actress: I loved Emma Stone in "Birdman." She's one of the best young actresses working today, and I'd watch her in anything. If she's in it, I'll go see it.

Adapted screenplay: "Whiplash" was great. Damien Chazelle ... that's a filmmaker to watch in the future.

Original screenplay: "Nightcrawler" is an instant classic. The way it captured the madness of both the main character and broadcast news itself was thrilling.

Special Features
NBC has a novel solution to the dearth of female directors: Let them direct
354 views