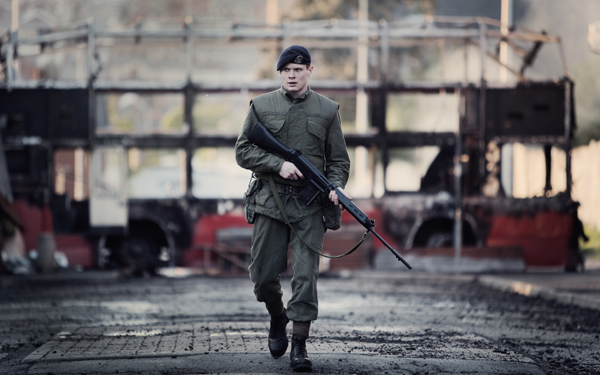 Belfast, Ireland. 1971. Gary Hook (Jack O’Connell) and the rest of his British brigade have just arrived with orders to quell the violent revolt of the Irish nationalists, or the IRA. It’s the first combat that Hook and his fellow soldiers have seen. They’re wide-eyed and boyish with sandpaper stubble on their chins; only a decade and a half prior the boys were suckling on their mothers’ teat. On their first day in Northern Ireland, the boys head to the front line: a section of town where the Protestants, loyal to the Queen, push up against the Catholic nationalists. Underestimating the Catholic hostility, the troop sergeant suggests they go without riot gear. Big mistake.

Yann Demange’s directorial debut, ’71, follows Jack O’Connell as an English soldier abandoned by his troop and forced to survive the night behind enemy lines. It’s a relentless frenzy of a film as O’Connell’s Gary Hook runs for his life, scared and alone, through the streets of tumultuous Belfast. The soundtrack, reminiscent of Paul Thomas Anderson’s Punch Drunk Love, throbs with a claustrophobic intensity, allowing viewers to not only view Hook’s nightmarish quest for survival but also feel it. Set during the historic years of the Troubles in Northern Ireland, ’71 brings to life the war-is-hell ethos, à la Full Metal Jacket, through O’Connell’s gripping portrayal of a soldier ambivalent to the bloodthirsty ambitions of his superiors.

“Above all, the idea of young men sent to fight dirty wars struck me as pertinent,” said Demange. “Often, they have more in common with the kids they’re pitted against than the men they’re taking orders from. It could be Iraq or Afghanistan. In ‘71’s protagonist, Gary, I saw the opportunity to explore the vulnerable masculinity of an anchorless boy, with no family, looking for a tribe to belong to and ultimately finding it in the army, only to be betrayed…”

To create an authentic feel, Demange brought in ex-military, who served during the Troubles, to advise cast and crew on everything, “from the way to hold a specific rifle to the squaddie lingo,” said O’Connell. Having served in the military, himself, O’Connell drew from his own experiences. To an ear unversed, the Northern Irish dialect can at times be both fun and indecipherable. At one point, a beer-swilling, loose-tongued Belfast boy not a day over 10, says, “They kill’t me dad, those IRA basteds.”

O’Connell’s performance as Hook, clinging to life like a fallen bumble bee in the ocean, drives home the film’s message regarding the senseless cruelty of war. As one army vet, played by Richard Dormer, plainly puts it, “You’re just meat to them.” With sullen servitude and a drive to make it through the night just so he can get as far away from the armed forces as possible, O’Connell’s character is as much a riveting role as he is an anti-war emblem. There’s no denying O’Connell’s looming rise to stardom—2014 saw him in the lead role of Angelina Jolie’s Unbroken and before that, starring as an imprisoned youth in David Mackenzie’s sleeper hit, Starred Up. But one has to wonder: when will we see him in a role where he’s not placed in a dire situation forced to survive?

The sole setback of ’71 is a direct result of the film’s principal design. Because it’s a ceaseless chase scene, placing Hook mere seconds ahead of his IRA pursuers, it leaves little room for backstory or character development. What’s left is a frantic 99 minutes during which you must remind yourself to loosen your grip on the plush red armrest and take the occasional deep breathe.