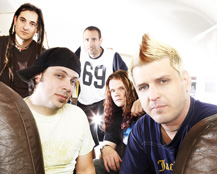 If it weren’t for Starbucks, Vinnie Fiorello’s life on the road would be a bit less bearable to say the least. By drinking an admitted average of four to six cups of coffee a day, the Less Than Jake drummer/lyricist is nearly always amped on caffeine, or on a quest for his next cup of Joe. Thankfully, the popular chain can be found in 36 countries and throughout the United States, meaning a café latte is never hard to find.

Armed with a pair of drumsticks, a savvy business sense and a way with his words, Fiorello is indeed at the very creative center of the band that’s still kicking after 14 strong years. He’s also taken on other business endeavors along the way, starting the independent record label Fueled By Ramen (home  to Panic! At the Disco and the Academy is..) as well as a toy company called Mokey Vs. Robot. With that much on his plate no wonder the man needs fuel to get him through each day.

Based out of Gainesville, Fla., Fiorello along with bandmates Chris Demakes (vocals, guitars), Roger Manganelli (bass, vocals), JR Wasilewski (saxophone) and Buddy Schaub (trombone) have been on the road, promoting their first release since 2004’s B is for B-sides.

Recorded in 18 days in a Los Angeles studio, the bands upcoming album, In With the Out Crowd—originally titled The Precise Dismantling of Family and Friends—contains 12 tracks that lyrically shows the band in reflective state of life, and musically, it takes a departure from the ska-infused pop punk the band built its reputation on.

“[The album] takes a good hard look at who I am as a person writing the lyrics and who my friends are, what they are thinking, how they are living their life and how my family lives their life,” Fiorello says.

Though some critics may pen the album as being more mature, he says it’s not about maturing, it’s just about progressing as a band.

“There is certainly a departure from the classic Less Than Jake sound but no matter how far it gets out, we always pull it back in with songs that sound like our band very much,” he says. “A record is a snapshot of who the band is at that moment of writing and recording it. Unless you listen to the same music over and over again it has to change. I’m not the same person I was back [when we started]. I’ve experienced different things.”

As the band continues to experience life and grow, what hasn’t changed, however, is the band’s status in the music industry.

“We are never the flavor of the month,” Fiorello says with a chuckle.  “It’s kind of a joke amongst our band.”

Hence, the title of the bands album.

Less Than Jake may joke about the fact they’ve never been the flavor of the month, but if you think about it, most trends hit big and die fast.  At least the band can pride itself on the fact that they’ve maintained a steady and honest career, rather than just being a name of the past.

So, what does Fiorello believe Less Than Jake’s secret to be?

“Well, I don’t have a crystal ball or anything.  Do we write pop songs? Yeah, we do cause writing pop songs are fun and catchy.  We don’t play garage rock and we don’t play urban hip-hop,” he begins. “I‘d like to think that we are just regular people and we try to respect people that respect us, but who knows what it really is.”