What could go wrong? How not to crash a first date 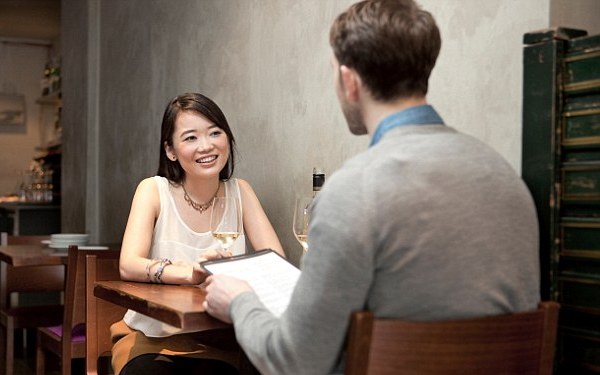 SEATTLE — Covering the happy-hour scene for The Seattle Times, nearly every week, I see several first dates unfold — a lot of them awkward.

I’ve seen guys ask their dates for help with the tab because they were short. I’ve seen them tell dates to order whatever they want — as long as they do it before happy hour ends.

Bartenders can attest. They have a ringside seat every night.

In honor of Valentine’s Day, I’ve asked some area bottle jockeys for their favorite dating stories and to share advice based on dates they have seen go well.

“A lot of guys treat first dates like an interview, and more or less recite their resume.”

“It’s a big-tech town, with lots of Amazon workers now, and a lot of them talk about how much money they make. It’s a status thing. But I guarantee you ... you don’t want to say that on the first date — unless (your date) is insipidly shallow.”

Things that made a date turn south:

“They have their phones out. And they are constantly staring at it or texting.”

“People complaining too much about the service, the food, their job or whatever. It just sends a negative message.”

“Getting drunk. Enjoy your drinks with a little sensibility while allowing the booze ... to take the edge off your anxiety or inhibition. Vermouth, Sherry, bubbles. Long drinks especially are a good choice: collins, fizzes, bucks, Amari and soda — anything with relatively low alcohol. Four daiquiris in an hour, not so good.”

“I see girls try to keep up with guys drinking. Some girls can hold their own, but most fail when they try to drink with bigger guys.”

Things that happened before a date arrives or while his/her date steps away:

“People sneak in shots. My favorite was this guy asked for the bill and left before the girl got back from the bathroom. That made for an awkward glance between her and (me). I’m like “Uh, he’s gone.’”

“One time my girlfriend was working behind the bar, and a guy asked her out while his date was in the bathroom.”

“I see a lot of people pull out their phones and (check) Tinder or other dating apps.”

“I had a girl show up before her first date, and she said, ‘Tell me how he tips ... it’s going to determine a lot about how this night goes.’ I told her that it wasn’t my info to give out, but I was very slow in retrieving his credit-card receipt. Whatever she thought of his tip I never knew.”

“I was working at Chez Gaudy (now closed). This 21- or 22-year-old guy and his girl walked in. He’s kind of shy, clearly out of his league. The girl ordered a Laphroaig neat and excused herself to go to the bathroom.

“He orders a White Russian. I told him, ‘No, you do not want that. That girl just ordered a cool drink. And if she sees you order a White Russian, that’s the image she will have of you.

“Here’s what you are going to do. You are going to order a Sazerac. When she comes back, she might ask ‘What’s that drink?’ And you are going to say casually that it’s the official drink of New Orleans. The recipe is 150 years old. It has rye, Peychaud’s bitters, sugar and absinthe.’ We rehearsed it for a second. He was nervous.

“The kid nailed it. I’m not claiming responsibility, but they walked out holding hands.”

A lot of first dates take place at bars now. Advice on places?

“It shouldn’t be loud, and think ahead about comfy seating. Great dates can last hours, and bar stools with no back or benches get old fast.”

“On a first date, do not take someone out where you hang out. You may think it didn’t go well, but your date might think otherwise. Some people are crazy. And the last thing anyone wants is a stalker posting up at your local watering hole.”

“Make sure it’s a comfortable place, be it lighting, music or whatever. A hospitable staff that knows you doesn’t hurt either. Vetting an establishment is requisite. Perhaps choose a place that closes a little earlier, say 10 or 11. And if all goes well, you can propose a nightcap at another establishment, which if accepted, in my experience, is an excellent barometer for success.”

A guy sees a girl at the bar he likes: What’s a good first move?”

“Just say ‘Hi.’ Saying hi means a lot here because people don’t approach other people. They will just sit and stare at the girl.”

“Walk up to someone confidently and say, ‘Hi, I am so and so. How are you?’ You would be surprised how often that works. It’s a welcoming surprise when men are engaging in this town.”

Sex & Relationships
The strange reasons why millennials are having less sex than their parents
2,561 views

Sex & Relationships
5 ways to get closure — without talking to your ex
2,592 views

Sex & Relationships
Why you should go on a second date (even if there was no spark)
2,077 views

Sex & Relationships
Is being ‘emotionally unavailable’ holding you back?
2,299 views