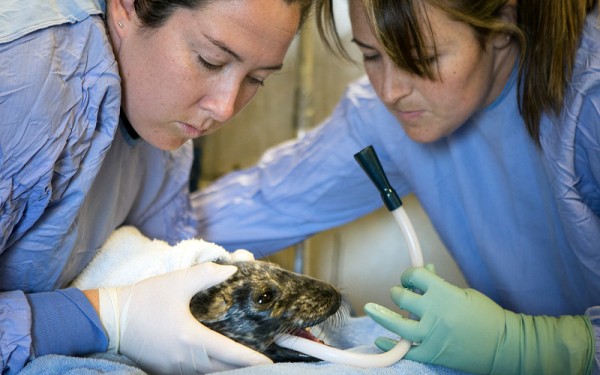 MOSS LANDING, Calif. — It’s 7:30 a.m. PST at the Marine Mammal Center, and the sea lion pups are famished. For the last five weeks, volunteers have been desperately trying to nurse back to health more than a hundred sea lions found along the state’s beaches in a mystery that’s threatening one of California’s most lovable sea creatures.

Three times or more each day, the volunteers snake tubes filled with pureed herring and fish oil down emaciated pups’ esophagi to deliver a chicken soup of the sea directly into these sickly mammals’ stomachs. Covering the pups’ eyes with a towel does little to stop them from locking their jaws.

“It’s good when they’re adverse to it,” said volunteer Sonny Knaub, 26. “We want to keep them wild.”

Each day, dog crates with sick sea lions arrive here and at four other locations from San Luis Obispo to Fort Bragg in what’s alarmingly become a third year of massive sea lion pup die-offs. And if the trend continues, marine biologists warn, it could deplete an entire generation of California sea lions. One desperate and hungry pup was found Wednesday beside busy Skyline Boulevard in San Francisco, more than 1,000 feet from the ocean.

Scientists say changes in the coastal California Current have pushed fish populations further from the sea lion rookeries in the Channel Islands, where the pups are born around June. And the diminishing number of sardines and anchovies have forced nursing mothers to switch to rockfish and squid. These changes are believed to have contributed to a lower quality of milk and higher number of malnourished pups.

“These pups should still be nursing. They don’t have the skills to catch food on their own,” said Shawn Johnson, director of the center’s veterinary science department.

It’s not the first time the California sea lion population has been threatened. By the mid-1970s, hunting and exposure to DDT had reduced the population to about 11,000. But that trajectory was reversed in 1972 with the passage of the Marine Mammal Protection Act and the U.S. Environmental Protection Agency’s ban on DDT. Sea lion colonies rebounded; the current population is just under 300,000, according to the National Oceanographic and Atmospheric Administration. But some marine biologists feel the population is now bumping up against the limit of what the environment can support.

Last year, the Marine Mammal Center, whose Moss Landing outpost is used mainly for triage, took in about 250 sea lion pups, mostly in March and April. The center is halfway to that number now, and it’s only February. Although these pups are 8 months old, they weigh only four or five pounds more than their average birth weight.

“You shouldn’t be able to see their hip bones,” said Lauren Campbell, an animal husbandry manager at the center, referring to the site’s new arrivals, Laddie and Japes, both 8 months old. The pair was found in Santa Barbara, Calif. recently and transported to the Moss Landing site.

To care for the crush of new arrivals, the center is relying on a host of volunteers, from marine biologists to veterinarians to a retired physicist and a freelance photographer. They constantly check medical charts and wash and disinfect all the items the animals have come into contact with — towels, tubes, rubber boots, smocks and cages. Some of the volunteers stay past midnight.

Besides an ID number, each rescued animal is given a name, usually by the person who made the rescue call. That name stays with the animals as they’re transported to the main Sausalito, Calif. facility.

But to make it that far, the starving — and sometimes injured or infected — animals need feeding and medication to stabilize them before they head north.

There’s no regular veterinarian at the Moss Landing site, so the volunteers and staff act as remote eyes and ears. They are in constant contact with Sausalito, sending photos or videos of the pups to determine the best course of care.

Some of the center’s patients don’t make it. Hassan, a sea lion pup rescued in Santa Barbara on the same day as Laddie and weighing only 22 pounds, was found dead Wednesday morning. His ice-covered body was sent to Sausalito, which has a morgue to determine causes of death.

Getting the pups enough nutrients is critical. When the pups transition to solid fish, they will eat three restaurant-grade herrings a day at a cost of $1.50. With over 100 animals currently at the main facility, the costs add up.

“It’s very taxing on our resources,” Johnson said. “This is normally our slow season.”

The more undernourished a sea lion arrives, the longer its rehabilitation takes. But if they recover, Japes and Laddie in two or three months will be ready for release. The release announcement with the animals’ names and other details is then emailed to the center’s volunteers.

One such email caught the attention of a San Jose, Calif. volunteer who legally changed his name to Sailor John. He saw his name listed as the first person to call in a rescue for a sea lion named Uncle Milty.

The 55-year-old John has been volunteering for only five months, but when he ran sailing tours out of the Monterey harbor he called in a dozen rescues. The first was for an adult sea lion with bad wounds from something tangled around its neck. The sea lion evaded capture, but a photograph was kept on file. The animal was finally rescued and rehabilitated last year, and John attended the release in Moss Landing. He remembers watching the crate open and Uncle Milty jumping right into the ocean.

As more sea lions are called in, volunteers and staff will continue to clock long days, but none seem to mind.

“It really is a special privilege,” said Moss Landing site manager Erica Donnelly-Greenan, “to be able to handle these animals.”