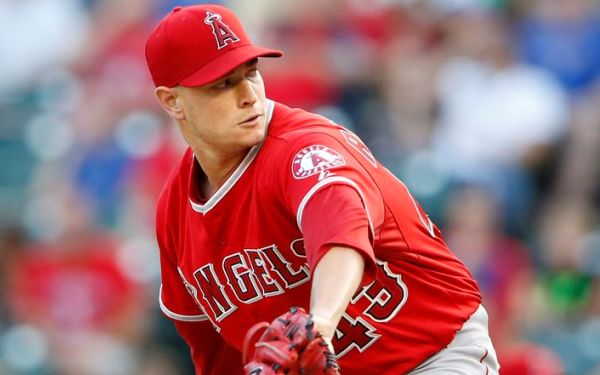 It could happen as early as mid-March, during a spring-training game of little meaning for everyone except the guy on the mound.

A grounder will be hit to first base, Los Angeles Angels pitcher Garrett Richards will sprint to the bag to cover, and his mind will flash back to the August night at Fenway Park when his left knee buckled and burst on a similar play, leaving him on the ground, writhing in pain.

“I can’t help but say it’s going to be weird to cover first in a game for the first time,” Richards said during a phone interview from Arizona, where he has spent the off-season rehabilitating from surgery for a ruptured patellar tendon. “I’ll have to bulldog through it. I’m sure it will be in the back of my mind, but I’ll get over it.”

Richards was having a breakout season — a record of 13-4 with a 2.61 earned-run average — when he suffered the season-ending injury.

He is slightly ahead of schedule in a six- to nine-month recovery process, and has regained full range of motion in the knee and most of the strength in his quadriceps and hamstring.

Richards has been throwing long toss since early December and has begun jogging on a treadmill at 100 percent of his body weight. He’s scheduled to begin throwing off a mound next week in advance of the team’s first workout for pitchers and catchers Feb. 20 in Tempe, Ariz.

Though he’ll be behind other pitchers in his throwing program and will gradually work his way into fielding and agility drills, he remains confident he’ll be ready by opening day.

“That,” Richards said, “has been my focus since Day One.”

However, there is that mental hurdle on the horizon, one almost as daunting as the hours of physical therapy and weightlifting required to overcome such an injury.

“That’s big for professional athletes, no matter what the injury,” said Alan Beyer, a sports medicine specialist and surgeon with the Hoag Orthopedic Institute in Irvine, Calif., which treats Angels players.

“As soon as they go back to doing the kind of thing they did to cause the injury, they’re a little worried. ‘Uh-oh, am I at risk here of this happening again?’ But Garrett is a grounded kid. He really seems to have the right attitude. I don’t think that’s going to be an issue in this case.”

Because of Richards’ youth and because he had no previous knee problems, Beyer said there’s a good chance the right-hander will return as strong as he was before he was injured.

“It’s not going to lead to the knee being any weaker, like it can sometimes be with an (anterior cruciate ligament) reconstruction,” Beyer said. “The patellar tendon is outside the knee, it’s not buried inside, and once you fix it and it scars in and the tendon heals, you’re left with a knee that doesn’t really have a deficit.”

A patellar tendon repair can reduce an athlete’s vertical leap or speed, but Beyer said that typically occurs in football and basketball players and shouldn’t affect a pitcher.

“I’m not a basketball player, so I think I’ll be OK,” Richards said. “I just have to beat the guy to first when I cover the bag.”

Hall of Fame pitcher John Smoltz said recently on MLB Network that a left-knee injury can be problematic for a right-handed pitcher, especially when transitioning from flat-ground throwing to the mound.

“You balance on your right knee, but you really have to finish and drive on your left knee,” Smoltz said. “You can say, ‘I’m favoring my left knee, so I’m not going to plant as much,’ which will correlate to your right shoulder and might cause a chain reaction of an injury.”

Beyer is skeptical of such a theory.

“The thing happens too much in a boom-boom-boom fashion. He’s going to start throwing at half-speed, dial it up to three-quarters speed, and when he realizes it doesn’t hurt and he’s not feeling it, then he’s good to go full-speed.”

If there was a silver lining to the injury, which was triggered by a spike that got caught in the dirt, it’s that Richards has had plenty of time to rejuvenate an arm that delivers 97-mph fastballs and wipeout sliders that made him one of baseball’s best young starters last season.

Richards threw 168 2/3 innings in 2014, the most he has thrown in any of his six professional seasons, and he struck out 164 batters and walked 51. How firm will those pitches be on seven months’ rest?

“I definitely notice my arm is feeling really good right now,” said Richards, who recently signed for $3.2 million. “I’ve never taken this much time off from throwing before. I feel fresh, ready to go. I’m just waiting on my knee.”