High school cheers on varsity squad member with Down syndrome 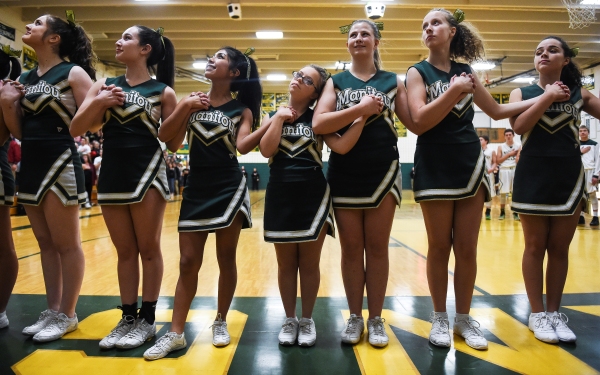 Manitou Springs sophomore Kory Mitchell, center, who was born with Down syndrome, rests her head on the shoulder of McKenzie Randolph, third from right, during the national anthem.
(Credit: Michael Ciaglo/Colorado Springs Gazette/TNS)

COLORADO SPRINGS — Cheerleaders are the most memorable of high school’s cast of characters. At best, they’re glamorous gymnasts in skirts, constantly having to defend their sport. At worst, they’re exclusionary queen bees — the ones who brutally rebuffed the band geek’s prom invitation or made the theater girl’s life a nightmare.

But a Manitou Springs, Colo., squad is changing the narrative.

The Mustangs are a tight-knit, proud group, forced closer together by adversity. They’ve had three coaches in three years and more than their fair share of drama. They no longer hold tryouts, instead taking anyone who will put in the work.

In walked freshman Kory Mitchell, all smiles, sweetness and personality. Her giggles infectious. Her extra 21st chromosome a bonus, not a hindrance.

Mitchell, now a sophomore, has Down syndrome. She’s a born performer and entertainer who dreams of moving to New York City.

A third-generation Manitou Springs student, Mitchell’s mother, Bonnie King, was a cheerleader “for about a minute” before the cliquish aspect of it sent her packing.

Mitchell, however, wanted to go for it. Even though it was nerve-wracking, King said she wanted high school to be a time for Mitchell to find her way.

“We wanted to take it as serious as any of the other athletes. I never put any limitations on her,” King said. “They expected the athletes to come all summer at 7 a.m. twice a week and do strength and conditioning. I wasn’t sure how that was going to work out, but she never complained.”

Born with a hole in her heart that required surgery, along with about 10 reconstructive ear and eye surgeries, plus celiac disease that often saps her energy, Mitchell took on weights and stairs, requiring a bit longer and more instruction. But she’d get it eventually.

“She’s just surprised me,” King said, tears welling up. “Sometimes you put kids in with different abilities, and you never know how it’s going to work out. And especially leaving her alone there ... I hoped kids will take her under their wing a little bit and encourage her.

“But now I don’t worry about them not including her. They’re a great group of girls. They’re very proud and willing to stand up for each other. They choose to be mature about any criticism.”

Senior Brianna Griffin, who served as Mitchell’s “big sister” — a guide and mentor — the past two years, said it wasn’t totally smooth at first.

“I ... really made an effort to try to bring her into the community because a lot of the girls didn’t know how to interact with her or were kind of apprehensive,” Griffin said. “But right off the bat, it was really apparent she was full of energy and excited to be on there.

“I wanted make sure she was included, so I was happy when I (became her big sister) because I thought it was really important that she knew that she was part of our little family.”

The tiny girl who used to be so afraid of heights she couldn’t stand near the top of the stairs in her home is now a flyer, her feet cradled by teammates as she stands five feet in the air, lifting the gold card in the green and gold and an ‘S’ in MSHS.

Mitchell eats lunch with her teammates most days and attends team-building exercises and sleepovers. She enjoys wearing her letterman jacket and her uniform on game days.

“I feel the love,” Mitchell said.

And now, she has a student of her own. A freshman, Trinity Kranz, joined the team this year. She also has Down syndrome and has been friends with Kory for many years.

“I help Trinity with her tumbling,” Mitchell said.

The squad, which won its third state cheer title in four years in December, has rallied around the underclassmen. Griffin said she takes pride in the fact that the squad doesn’t fit the “cheerleader stereotype.”

“I started to look at Kory as being a molding on our team that keeps us together,” Murdoch said. “She always comes to practice so happy and ready to work and makes girls on team feel great. She brings joy, even when we’re not having the best of days.”

Kory participated in her first competition with the Mustangs, the Colorado School of Mines Dance and Cheer Classic, on Jan. 24. In preparation, Kory went home after two-hour afternoon practices and worked on the routine even more, with her mother videotaping and giving pointers.

Kranz, who couldn’t compete as a freshman, convinced her mother to drive up to Golden just to watch Kory.

The 3A team hit their routine perfectly, according to Murdoch, and placed second only to a 5A team.

“Kory hit everything. We got off the mat and circled up ... some of us had tears of joy, we were so proud,” Murdoch said.

A few days later, King received a text message. Kory’s teammates wanted to surprise her with a gluten-free cake to celebrate her accomplishment.

“She really deserves everything she gets,” Murdoch said. “We definitely underestimated her. We realized that she’s capable of doing more than we ever thought.

“She worked harder than probably most of the girls on our team. We wanted her to feel special.”