New Dr. Seuss book ‘What Pet Should I Get?’ coming this summer 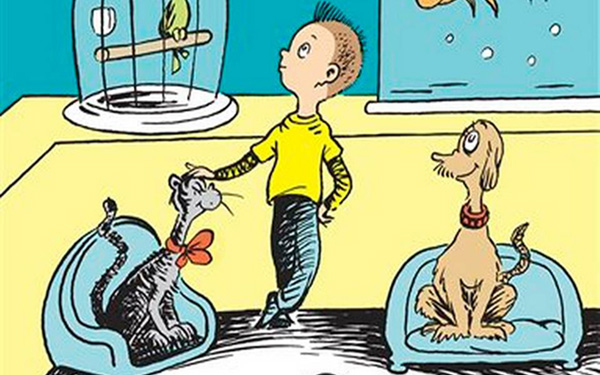 Another recently-discovered manuscript is coming to summer reading lists, this time in the form of a new Dr. Seuss book.

The manuscript by the late author Theodor Geisel, known to readers as Dr. Seuss, is coming out in July_the same month as the release of a recently-discovered novel by Harper Lee.

Random House Children's Books announced Wednesday that Geisel's manuscript with illustrations, called "What Pet Should I Get?," will be published on July 28. The publisher also plans for at least two more books from materials discovered in the late author's La Jolla home in 2013.

A box filled with pages of text and sketches was found and set aside shortly after the author's death in 1991 when his widow, Audrey Geisel, was remodeling their home. It was rediscovered in fall 2013 by Audrey Geisel and the author's secretary.

"While undeniably special, it is not surprising to me that we found this because Ted always worked on multiple projects and started new things all the time he was constantly writing and drawing and coming up with ideas for new stories," Audrey Geisel said in a statement.

"What Pet Should I Get?" was likely written somewhere between 1958 and 1962 because it features the same brother and sister who are in his "One Fish Two Fish Red Fish Blue Fish" book published in 1960, said Random House associate publishing director Cathy Goldsmith.

This year marks 25 years since the publication of Geisel's previously thought to be final book, "Oh, the Places You'll Go!" Geisel wrote and illustrated 45 books during his lifetime and his books have sold more than 650 million copies.

"To be able to share this newly-discovered Dr. Seuss book that was created during a most prolific period in his career marks a special moment in children's book publishing," said Barbara Marcus, president and publisher of Random House Children's Books.

Earlier this month came the surprising news that author Harper Lee's second book, "Go Set a Watchman," would be published in July by Harper, a division of HarperCollins.

Lee, now 88, hadn't published another book since her renowned "To Kill a Mockingbird." Harper said the original manuscript, considered to have been lost, was discovered by Lee's lawyer, Tonja Carter, last fall.