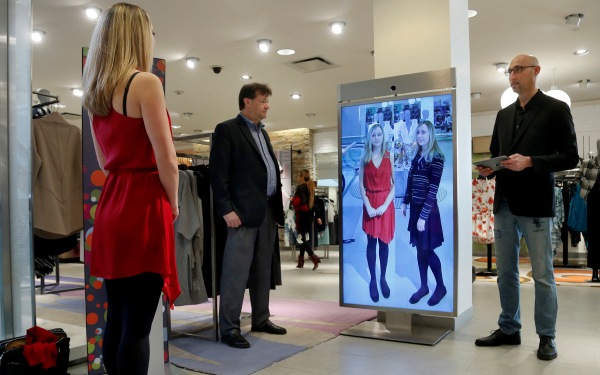 SAN FRANCISCO — Standing before a full-length mirror in Neiman Marcus, I see double.

When I glance to the left, I find myself in a lipstick-red evening gown, with bolts of flowing silk cinched at my waist. I flick my eyes to the right and I am all business, wearing a simple black dress topped with a patterned blazer.

These are not just the delusions of a giddy reporter playing dress-up on company time. I wasn’t hallucinating — I was looking into a smart mirror.

The MemoryMirror device is not a mirror at all, but rather a screen projecting images captured by an overhead camera. The contraption does much more than just show your reflection. It saves each outfit you try on, allowing you to compare different styles side by side to figure out which looks best.

If you’re torn, you can share the images with your friends, almost like having them in the dressing room with you. And with the mirror’s 360-degree view, you can scrutinize outfits from every angle, as if you had eyes in the back of your head. Never again will you struggle to extract the truth from your significant other about how your butt looks in a new pair of pants — the mirror holds the answer.

Although the mirror offers a few thrills, I felt a bit bewildered when I first stood before it — it’s not everyday your reflection gets disrupted.

“It’s a new way to see how you look,” said Scott Emmons, who heads the Innovation Lab at Neiman Marcus. “We’re socializing people as to what it is.”

The MemoryMirror device is the brainchild of MemoMi, a Palo Alto, Calif., startup.

Chief executive Salvador Nissi Vilcovsky Salvador came up with the idea for the mirror nearly a decade ago while working in fashion in Milan, but it wasn’t until he met co-founder Ofer Saban that he was able to pull it off. Saban came up with algorithms that correct the visual distortion that comes from the camera’s placement above. Without them, customers would see themselves as bobbleheads, with oversize craniums and tiny legs.

I took the MemoryMirror for a spin on a recent morning. After standing before it in the drab dress I’d arrived in, I modeled a black blazer with flecks of white and that eye-catching red dress. I mulled the various combinations afterward using an iPad, deciding which outfits to display on the screen. (MemoMi places the devices on the store floor, rather than in dressing rooms, due to obvious privacy concerns.)

I’m an enthusiastic shopper — to a point. When forced to decide between two different items, I tire of trying them on over and over again. I usually throw up my hands, decide on impulse and live with the consequences. But there is no need for repeat auditions with the MemoryMirror — you simply toggle back and forth between snapshots of outfits you’ve already tried on.

And the MemoryMirror’s 360-degree view is sure to find a following. While I don’t agonize over how my derriere looks in a pair of pants, it’s nice not to have to wonder. For that vantage point, the MemoryMirror lets you record eight-second videos, during which you can spin around. When you play back the video, you’ll see every angle.

During the demo, I saw just how deeply ingrained our behavior is in front of a mirror. I kept craning my neck to see how the outfits looked from behind, until Salvador reminded me it was unnecessary — the camera could capture it all.

Eventually, I backed away from the mirror, certain I’d seen all there was to see. But then, Salvador called me back, and my red dress was painted blue.

MemoMi has the bandwidth to project the outfit that you are wearing in every shade of the rainbow. Neiman Marcus hasn’t deployed this feature yet, wanting to solidify the mirror’s place in stores first. But Emmons notes that eventually, Neiman Marcus customers might be able to see how an item suits them in all the colors the store has in stock.

Salvador says MemoMi will also change online shopping. well. Once users have tried on an outfit with the MemoryMirror in stores, MemoMi can show them how they’d look in various outfits they’re perusing on the Web. That could be dangerous for those who already fight to resist the thrill of online shopping.

Though the smart mirror phenomenon was new to me, Forrester retail and e-commerce analyst Sucharita Mulpuru has seen other department stores experiment with them.

The gadgets generate buzz, but they do little to change the way customers shop, she said.

“None of the previous iterations have really been much more than a gimmick,” she said.

But Emmons sees great potential for the MemoryMirror.

“This is not a one-trick pony,” he said. “It’s a two-way communication device.”

As for me, I kept fighting the urge to rub my eyes while gazing into my high-tech reflection. I don’t doubt the utility of the MemoryMirror, but it would take me a while to get used to having double vision.